After more than eight years of conflict, the situation in the Syrian Arab Republic remains one of the most significant humanitarian crises of our time. The scale, severity and complexity of the humanitarian needs remain extensive, particularly for children, due to the continued hostilities in several regions, new and protracted displacements, increasing self-organized returns and the erosion of community resilience.

Grave violations of children's rights and violations of international humanitarian law continue, with children killed and injured by the persistent use of explosive weapons in civilian areas, the destruction of health and educational facilities and the recruitment of children. Years of conflict have dramatically reduced access to basic social services: 2.1 million children aged 5 to 17 years are out of school and 1.3 million children are at risk of dropping out or not learning.

Displaced populations and returnees, particularly in the northeast and northwest, are vulnerable to outbreaks of infectious diseases due to unsanitary living conditions, overstretched health services and low coverage of routine immunization. UNICEF and the World Health Organization (WHO) estimate that over 577,000 newborns require routine immunization and some 320,000 children aged 13 to 59 months are not fully vaccinated. In addition, some 15.5 million people require access to safe water, including 6.2 million people experiencing acute needs.

While the full scale of explosive contamination is not known, preliminary findings indicate that nearly 2,600 communities are contaminated, with 11.5 million people at risk – an increase of 1.3 million additional people from 2018. The delivery of humanitarian assistance remains extremely difficult due to active conflict, insecurity and restrictions on movement. Between May and August, the escalation of hostilities has left over 630,000 people displaced in the northwest, with widespread destruction of civilian infrastructure (homes, hospitals, schools and water stations). WHO has confirmed 43 incidents impacting health facilities or health personnel in northwest Syrian Arab Republic, and the United Nations has verified 73 incidents affecting educational facilities. Over half of the school-aged population of Idleb (300,000 children) is at risk of being out of school.

The humanitarian situation remains fluid in the south, where tensions continue. Between March and September 2019, almost 20,000 people departed Rukban camp towards Homs, while some 12,000 people remain in the camp without regular humanitarian assistance. The northeast remains one of the most complex operating environments in the country due to ongoing hostilities, weather-related hazards and population movements. Al Hol camp currently hosts some 68,000 people (90 per cent children and women) who are fully dependent on humanitarian assistance. An estimated 160,000 people, including 70,000 children, have been displaced since the start of the military operations on 9 October.

UNICEF's humanitarian strategy in the Syrian Arab Republic will be implemented using the Whole of Syria Approach through three hubs in Damascus, Gaziantep and Amman. In nutrition, UNICEF will strengthen life-saving and preventive services for vulnerable populations, focusing on safe and appropriate infant and young child feeding (IYCF) practices, as well as micronutrient interventions. Increasing access to life-saving and coordinated, equitable health services for the most vulnerable will remain a priority, including through the Expanded Programme on Immunization for children under 5 years and supplementary immunization activities in hard-to-reach and newly accessible areas. Cross-cutting issues such as gender and age will be integrated throughout the response. The water, sanitation and hygiene (WASH) strategy will continue to focus on the restoration and maintenance of water and sanitation infrastructure to build resilience, and UNICEF will continue to deliver life-saving interventions such as emergency water; sanitation support for solid waste facilities; supply distribution; and hygiene promotion for the most vulnerable. Equitable access to education will be scaled up, in line with the No Lost Generation initiative, focusing on areas with severe needs, to support alternative learning, self-learning, early learning and quality of education, including through access to learning spaces. UNICEF will increase its focus on adolescents and young people through cross-sectoral services, life-skills programmes, vocational education and entrepreneurship training.

UNICEF will work to enhance equitable access to quality child protection services, including for children with disabilities, by improving the quality of community-based child protection services, facilitating community and psychosocial support interventions and improving the quality of specialized services for survivors of violence, exploitation and abuse. UNICEF will continue to engage in social protection schemes that combine regular cash distribution with case management, primarily targeting families of children with disabilities. Gender-based violence risk mitigation will be strengthened across all sectors, and programming on the prevention of and response to sexual exploitation and abuse will be scaled up using a survivor-centred approach and quality gender-based violence programming. UNICEF will continue to engage with communities to promote key behaviours related to their well-being and create feedback mechanisms for affected populations.

Humanitarian Action is at the core of UNICEF’s mandate to realize the rights of every child. This edition of Humanitarian Action for Children – UNICEF’s annual humanitarian fundraising appeal – describes the ongoing crises affecting children in the Syrian Arab Republic; the strategies that we are using to respond to these situations; and the donor support that is essential in this response. 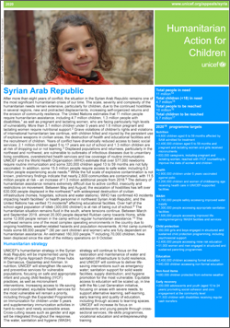 Download the full appeal to find out more about UNICEF’s work and targets for the Syrian Arab Republic.
Download file
(PDF, 201,42 KB)