2.5 million people with safe and accessible channels to report sexual exploitation and abuse

2.5 million people accessing a sufficient quantity and quality of water

The October 2021 military coup exacerbated the already complex humanitarian crisis in the Sudan. A staggering 3.7 million people remain internally displaced due to conflicts and environmental hazards in Blue Nile and all the Darfur and Kordofan States; while nearly 1 million people from neighbouring countries have sought refuge in the country. Areas including Jebel Marra and the Nuba Mountains are hard to reach due to conflicts, while other areas become routinely inaccessible due to insecurity and seasonal floods.

A political impasse and social unrest have persisted since the coup. A severe economic crisis and high inflation have triggered a wave of strikes, including among health sector staff and teachers, and this has further compromised basic social services that were already crumbling and further weakened by the coronavirus disease 2019 (COVID-19) pandemic.

The consequences for children living in this context are dire: 1 out of 18 children will not reach their fifth birthday. Recurrent disease outbreaks, including measles and malaria, continue to affect large numbers of children, while the routine immunization rate has rapidly fallen. Between 2019 and 2021 the number of children who have not received a single dose of life-saving vaccines doubled.

Sudan has one of the highest prevalence rates of malnutrition among children in the world. More than 3 million children are wasted, of whom 611,000 are severely wasted and at high risk of death. This number may further increase to 650,000 with the impact of 2022 dry spells, food ration cuts and rising food prices.

In addition, 11.5 million people (5.9 million females and 5.6 million males) are in need of urgent water, sanitation and hygiene (WASH) interventions. Out of 189 localities in the country, 151 face water scarcity that is at the crisis to critical level, and these localities are alsohighly susceptible to natural hazards, especially flooding. Such WASH-related diseases as diarrhoea and cholera remain a high risk due to lack of safe water and adequate sanitation.

Nearly 7 million school-age children (one in three) are out of school, and the remaining 12 million (6.2 million girls and 5.8 million boys) struggle to learn due to inadequate learning spaces and supplies, insufficient teacher capacity and pay and lack of other support, including for disabled children. Of those in school, 7 out of 10 cannot read and understand a simple sentence.

UNICEF’s humanitarian strategy is closely aligned with inter-agency, sectoral and government priorities to deliver timely, efficient and quality interventions. UNICEF leads the Child Protection Area of Responsibility and the education, nutrition and WASH sectors while playing a key role in the health sector, the gender-based violence subsector and the Refugee Consultation Forum. On behalf of the sectors, UNICEF procures and manages the pipeline of core supplies for management of severe wasting as well as the health and WASH contingency stocks for emergency response.

Given the recurrent crises, including climate hazards that are more and more unpredictable, and increasing vulnerabilities and weakened public sector services, UNICEF's priority remains enhancing and expanding life-saving prevention, preparedness and response interventions for natural and human-caused disasters, including epidemics. This includes preparedness and contingency planning, capacity building, stock pre-positioning and sustaining UNICEF-supported services as well as those delivered by other partners. By enhancing the linkages between humanitarian response, development programming and peacebuilding, UNICEF will ensure the delivery of timely life-saving and life-sustaining interventions to children before, during and after a crisis.

UNICEF will scale up life-saving interventions, including integrated nutrition services for prevention, early detection and treatment of child wasting, where the focus will be on children under age 2. UNICEF will also strengthen the public health system and access to health care and vaccinations. UNICEF is committed to protecting children’s well-being through child-friendly spaces and protection responses for children affected by conflicts and crises. Equally important are retaining the most vulnerable children in learning in schools or through alternative physical or digital learning programmes and strengthening community and school-based emergency preparedness to enhance resilience.

Holding to the Grand Bargain commitments, UNICEF will enhance community-based interventions, especially in hard-to-reach areas, and implement risk-informed and conflict-sensitive programming to achieve equitable coverage of basic services. UNICEF will continue to work with local and national organizations, including women- and girl-led groups dedicated to responding to and preventing violence, abuse and exploitation. Given the worsening economic crisis and collapsing basic social services, UNICEF will scale up cash-based programming as a core element of humanitarian and resilience programming, responding to families’ survival needs to prevent them from adopting harmful coping strategies and to contribute to the recovery of local economies.

In line with the Core Commitments for Children in Humanitarian Action, UNICEF will give particular consideration to gender and disability while enhancing accountability to affected populations. UNICEF will mainstream child-centred planning and gender-responsive preparedness into national planning while committing to the prevention of sexual exploitation and abuse through reporting mechanisms that include community engagement and mobilization platforms. UNICEF will also strengthen overall monitoring and evaluation for accountability and build on lessons learned.

Humanitarian Action is at the core of UNICEF’s mandate to realize the rights of every child. This edition of Humanitarian Action for Children – UNICEF’s annual humanitarian fundraising appeal – describes the ongoing crises affecting children in Sudan; the strategies that we are using to respond to these situations; and the donor support that is essential in this response. 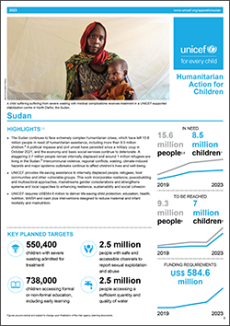 Download the full appeal to find out more about UNICEF’s work and targets for Sudan.
2023 HAC appeal (PDF, 3 MB)