In Ethiopia today, at least 31.4 million people, including 16.5 million children, 7.8 million women and 5.7 million people with disabilities are suffering due to multiple, overlapping hazards: armed conflict, severe drought, flooding, intercommunal violence and outbreaks of diseases including cholera, measles and malaria. These crises have also compounded pre-existing gender inequalities, exclusion and risks for women and girls.

Primary and secondary displacements and related needs of at least 4.5 million internally displaced people continue to grow, while the situation of 875,879 refugees is also highly affected by the current crises. Social services and accountability mechanisms that are critical to the protection of women and girls have broken down or been weakened due to insecurity and instability. More than 1,000 square kilometres of land is estimated to be contaminated with landmines and explosive remnants of war.

In northern Ethiopia (the Tigray, Afar and Amhara Regions), a sprawling humanitarian crisis due to armed conflict has placed 9.4 million people at risk. Approximately 1.4 million people have been displaced, more than 440,000 of them in Tigray. A comprehensive, multisectoral humanitarian response to new and existing displacements in Tigray has remained constrained: staff movement is limited due to security concerns and limited access, including restrictions on cash, fuel and life-saving supplies. More than 225,000 people are displaced in Afar and 732,000 in Amhara. Damage and destruction of schools and health facilities has impacted children’s access to inclusive, formal education and prevented access of children and women to essential health and nutrition services, including routine immunization. Protection concerns have significantly increased because children are exposed to violence and potential separation from their families.

In the southern and eastern regions of the country (in the Afar, Oromia, Somali and Southern Nations, Nationalities and Peoples Regions), the worst drought in 40 years has impacted 24.1 million people. More than 3.5 million livestock have died, and livelihoods of pastoralist and agro-pastoralists have been extinguished. Families have been forced to migrate in search of food and pasture, forcing children to drop out of school and increasingly face child marriage as the only prospect for a family's survival. An IPC classification of 4 (emergency levels) is indicated in all affected regions through January 2023. Recent ‘Find and Treat’ nutrition campaigns have shown a proxy global acute malnutrition mean average of 23 per cent in the drought-affected regions, exceeding the global emergency threshold of 15 per cent.

The Afar, Amhara and Gambella Regions have also experienced medium- to large-scale flooding events that have impacted up to 1.7 million people. What's more, ongoing outbreaks of cholera, measles and malaria have worsened the already grave situation nationally.

UNICEF will continue to address the complex crises in Ethiopia through its long-standing partnerships with government institutions and national and international organizations, and by drawing on its capacity to deliver a principled, child-centred humanitarian response, including in hard-to-reach areas. UNICEF will continue to ensure that life-saving and sustainable solutions, underpinned by strong preparedness, are tailored to the needs of the most vulnerable people, with a focus on children, women and people with disabilities.

UNICEF has expanded its operations throughout the northern conflict areas and in southern drought-affected regions, applying the rapid response mechanism, conducting integrated multisectoral responses in displacement settings and enhancing field presence in hard-to-reach areas. This flexible and adaptive approach is supported by an extended field presence anchored in nine field offices. UNICEF is ensuring the delivery of services and supplies in areas most affected by conflict and climate shocks and serves as a provider of last resort where gaps in partner presence persist. UNICEF has a contingency plan to guide preparedness and response in the challenging northern conflict environment, with a three-month recovery plan for the Tigray, Amhara and Afar Regions that looks at the opportunities to rescale programmes.

In alignment with the United Nations intersectoral collaboration mechanism between the Nutrition, Health, WASH, Food and Agriculture Clusters, UNICEF will scale up an inclusive, holistic response to wasting. This includes early identification and treatment of severe wasting through mobile health and nutrition teams and 'Find and Treat' nutrition campaigns. UNICEF is working to make damaged health facilities functional and fostering integration with service delivery opportunities, including the Expanded Programme on Immunization. UNICEF will also expand operations to deliver safe and sufficient water by increasing water-resilient systems in communities, e.g., by using satellite groundwater mapping and installing solar-powered water systems. To respond to acute needs while mitigating future adverse impacts, cost-effective options including rehabilitation of water schemes will be implemented, in addition to short-term interventions (e.g., water trucking). UNICEF will provide essential WASH non-food items and promote hygiene awareness activities, and continue to lead on climate-resilient and durable solutions strategies. Shock-responsive cash transfers will be scaled up for households impacted by conflict and drought; where feasible, UNICEF will leverage government structures and existing safety nets to channel funds to those most in need.

Inclusive access to formal and informal education for out-of-school children will be enhanced. UNICEF will provide integrated, inclusive psychosocial support and protection case management to women and children, including through a rapid deployment model. Gender-based violence risk mitigation will be integrated into all programme responses. Improved reporting mechanisms and assistance to survivors of sexual exploitation and abuse will strengthen protection from sexual exploitation and abuse.

UNICEF will continue to promote community engagement, localization of aid that prioritizes children and women and strong feedback and accountability mechanisms, and undertake conflict-sensitive programming, capacity building and systems strengthening of partners.

Humanitarian Action is at the core of UNICEF’s mandate to realize the rights of every child. This edition of Humanitarian Action for Children – UNICEF’s annual humanitarian fundraising appeal – describes the ongoing crises affecting children in Ethiopia; the strategies that we are using to respond to these situations; and the donor support that is essential in this response. 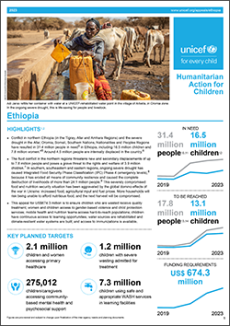 Download the full appeal to find out more about UNICEF’s work and targets for Ethiopia.
2023 HAC appeal (PDF, 1 MB)