3 million people reached through messaging on access to services

The Central African Republic is one of the worst places in the world to be a child, and the situation is deteriorating. Due to the combined effects of violence, COVID-19 and structural fragility, an estimated 2.8 million people – 57 per cent of the population – will need humanitarian assistance in the Central African Republic in 2021. This includes 1.3 million children and 430,000 people with disabilities. Some 1.9 million people, or 39 per cent of the population, will experience acute vulnerabilities that threaten their survival.

Despite the February 2019 peace agreement signed between the Government and 14 armed groups, the security situation in the country remains precarious. Fueled by significant outbursts of violence in several regions, internal displacement is at its highest level in three years. There are 658,000 people uprooted from their homes. One in five Central Africans is displaced by conflict.

While the Central African Republic has registered relatively few COVID-19 cases, thanks to early prevention and response measures and the country’s relative isolation, the pandemic is still active, and the impact of mitigation measure on the socio-economic situation has been severe. By the end of March, nearly 3,700 schools were closed, disrupting the learning of more than 1.4 million pre-primary through secondary students. The school reopening process has been slow, particularly in areas affected by violence. The pandemic has also impacted the health system, which was already facing ineffective financing, insufficient supply of medicines, and limited access to essential services. Low levels of immunization may give rise to new epidemic outbreaks.

The economic slowdown and rising food prices have had a significant impact on the well-being of Central Africans, with 81 per cent of households reporting negative effects. Children are likely to experience the worst impacts. The number of children under 5 years in need of SAM treatment is expected to rise by 25 per cent due to the pandemic, to 62,300.

Children in the Central African Republic are also affected by other epidemics, including measles and polio, and the Ebola outbreak affecting the Democratic Republic of the Congo remains a threat. The prevalence and impact of natural disasters, particularly flooding, are expected to increase. The country has the second highest mortality rate related to the use of unsafe water in Africa; and 51 per cent of the population will be in critical need of access to water in 2021. Incidents of gender-based violence have also increased during the pandemic, including in Bangui, where cases have doubled. Some 900,000 children will need protection in 2021. The humanitarian response in the Central African Republic has been chronically underfunded. In the context of such high and escalating needs, urgent assistance is more important that ever. Without it, an entire generation is at risk.

In 2021, UNICEF will prioritize child-centred, life-saving interventions and risk reduction to support displaced, returning and host community people in the Central African Republic who have been impacted by the enduring crisis, recurring epidemics and natural disasters, while maintaining a strong focus on the COVID-19 pandemic. The humanitarian response will rely on close collaboration with partners in the country’s most troubled areas, the use of pre-positioned supplies and UNICEF's network of four field offices.

The Rapid Response Mechanism led by UNICEF will carry out multisector assessments on new crises, share the results with the humanitarian community, and provide essential household items and critical WASH services to vulnerable children and families newly affected by shocks. By maintaining strong coordination with external actors, the Rapid Response Mechanism will expand its role as the entry point for complementary UNICEF responses, including the use of mobile teams for child protection, health and nutrition assistance. This approach will enable the delivery of a more comprehensive, higher impact first response, while ensuring that needs continue to be met over the longer term.

UNICEF will support the Government to respond to COVID-19, including by supporting the safe return to school, particularly in crisis-affected areas; mobilizing communities for prevention; developing sustainable WASH infrastructure in underserved areas; and mitigating the pandemic’s impact on the most vulnerable children. COVID-19 mitigation efforts will include preventing related child protection risks, expanding SAM treatment and preventive interventions focusing on optimal nutrition practices while scaling up multi-purpose cash programming, in line with the Grand Bargain commitments. COVID-19 prevention measures will be further mainstreamed into UNICEF’s programming.

The protection needs of children will remain central to UNICEF's humanitarian response in the Central African Republic. UNICEF will support efforts to release children from armed groups; reunify separated or unaccompanied children with their families; and provide appropriate psychosocial support to children affected by conflict. Gender-based violence risk mitigation, prevention and survivor assistance interventions will also be prioritized. UNICEF will mobilize partners to address preventable childhood illnesses, malaria, HIV and malnutrition, and will contribute to providing out-ofschool children with access to safe learning spaces and quality education, including through radio programmes.

Finally, UNICEF will work with line ministries to reinforce government capacities for humanitarian coordination and response, and will continue to lead the child protection working group and the nutrition, WASH and education clusters. UNICEF will also mainstream the principles of accountability to affected populations across the response.

Humanitarian Action is at the core of UNICEF’s mandate to realize the rights of every child. This edition of Humanitarian Action for Children – UNICEF’s annual humanitarian fundraising appeal – describes the ongoing crises affecting children in Central African Republic; the strategies that we are using to respond to these situations; and the donor support that is essential in this response. 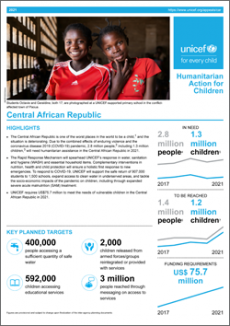