A decade after the catastrophic earthquake, UNICEF and partners are still helping Haiti along the road of recovery.

By Christine Nesbitt and Jason Miks

When Haitians started their day on 12 January ten years ago, they could not have imagined the devastation that was about to befall their country. Later that day, a 7.0 magnitude earthquake struck, claiming the lives of more than 220,000 people. The quake – one of the deadliest natural disasters on record – destroyed much of the country’s fragile infrastructure and left many Haitians in dire need of assistance.

UNICEF mobilized quickly, providing urgent support to children, women and families, many of whom were without shelter, water, food and other basic necessities. The priority was to save lives.

But a decade later, Haiti continues to face multiple crises. Worsening food insecurity and malnutrition, water-borne disease epidemics and high vulnerability to natural disasters have placed added pressure on women and children. UNICEF is committed to the children of Haiti, working with the government and other partners to reach vulnerable children – giving them the support they need to recover and helping them along the path to a better future.

(Above) February 2010: A girl looks out from between the tarpaulin sheeting of the tent where she is living, in a displaced camp in the capital Port-au-Prince.  Three million people – almost a third of the population – were directly or indirectly affected by the 2010 earthquake.

February 2010: Nuns from an orphanage are pictured unpacking a box of care packages for children in Port-au-Prince. Working together with national and international partners, UNICEF’s first priority after the earthquake hit was to save lives, including by providing clean water and sanitation, food, shelter, medical assistance, and also supporting children who were separated from their families.

April 2010: People are pictured buying and selling goods in a bustling market area set up in front of badly damaged buildings in the downtown area of Port-au-Prince. The earthquake’s epicenter was only 17 kilometres from Port-au-Prince. The result was destruction on a massive scale – 300,000 homes were damaged or destroyed, displacing around 1.6 million people.

November 2010: A girl who has contracted cholera lies on a cot at the hospital in Gonaives, a commune in northern Haiti and the capital of the Artibonite Region. Today, Haiti continues to face multiple crises, including worsening food security, malnutrition, water-borne disease epidemics and high vulnerability to natural disasters.

December 2010: Children carry jugs of water at a camp for earthquake victims in the Delmas District of Port-au-Prince. During the first five months of the emergency response, UNICEF supported a water trucking operation that delivered clean water to about 680,000 people per day.

July 2011: Students play outside the Mamalu Kindergarten and Primary School in Port-au-Prince. The school, which collapsed during the earthquake, was rebuilt by UNICEF into a semi-permanent facility.

November 2016: A member of a UNICEF-supported cholera rapid response team uses a pressure sprayer containing a chlorine solution to disinfect areas potentially contaminated by cholera bacteria in Jacmel, Haiti. It will take three years of no laboratory-confirmed cholera cases before the epidemic in Haiti can be fully declared over, but no cases have been confirmed since 4 February 2019.

January 2019: A baby girl is weighed shortly after being born. The shadow of worsening food insecurity, malnutrition and economic fragility continues to loom over these young lives in Haiti. “I pray first of all for her to be healthy,” says her mother, Sara Cléomène.

August 2019: Guino Sylvain (left) and Micherline Jean-Pierre attend a parenting club offering information and advice on preventing diseases resulting from malnutrition. There’s no better investment a country can make than in its children. Healthy children do better in school – and are far better placed to help build a better future.

Humanitarian action and emergencies
Haiti
Latin America and the Caribbean 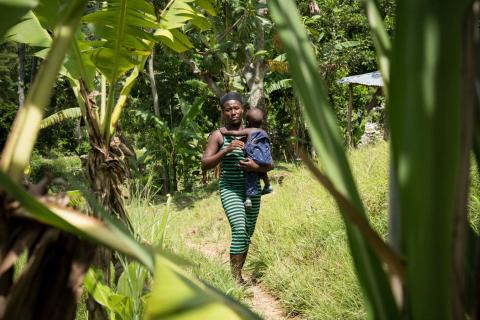 Beating cholera in Haiti, one home at a time

With no new cases confirmed since February, the country is getting closer to eliminating the disease