This is a summary of what was said by Afshan Khan, UNICEF Regional Director for Europe and Central Asia – to whom quoted text may be attributed – at today's daily press briefing at the UN Headquarters in New York 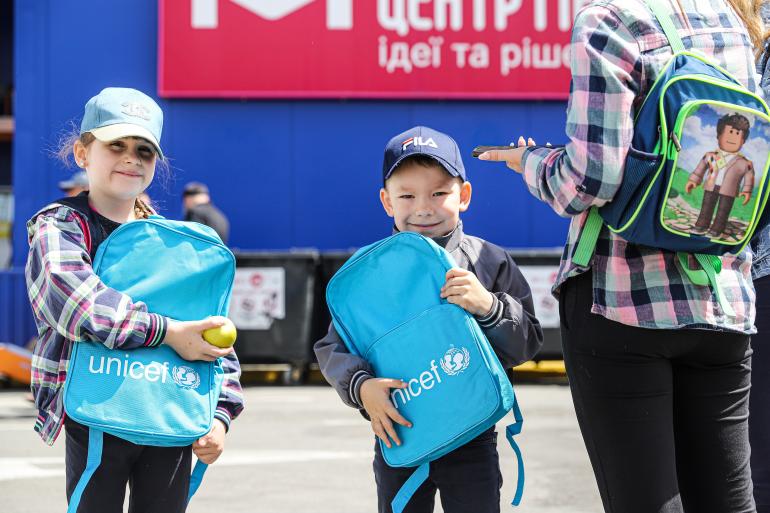 UNICEF/UN0649047/Klochko
Children who were forced to flee their homes due to the hostilities receive UNICEF backpacks and other items at a reception centre in Zaporizhzhia, 24 May 2022.

“I was able to visit Kyiv, Irpin, Bucha, Zhytomyr and Lviv, and the time I spent in the country provided a clear view of the huge impact the war in Ukraine continues to have on children, both inside and outside the country; both in the region and across the world.

“The numbers are staggering, and bear repeating. Nearly two-thirds of Ukraine’s children are displaced – whether displaced inside the country or those who have fled across borders as refugees. Children forced to leave homes, friends, toys and treasured belongings, family members and facing uncertainty about the future. This instability is robbing children of their futures – trauma and fear can have long-lasting impacts on children’s physical and mental health.

“According to the latest figures from colleagues at OHCHR, 277 children have been killed, with another 456 children injured, mostly due to the use of explosives in built-up, urban areas. This use of explosive weapons in populated areas and attacks on civilian infrastructure must stop. It is killing and maiming children and preventing them returning to any kind of normal life in the towns and cities that are their homes.

“At least 256 attacks on health care facilities and one in six UNICEF-supported ‘safe schools’ in the east of the country have been damaged or destroyed.

“We are increasingly concerned about the situation with access to safe water with at least 1.4 million in the east without access to running water.

“As these numbers show, the war in Ukraine is a child rights crisis, and UNICEF is working to support children and families wherever they are in the country. This critical role of UNICEF in Ukraine is reflected in the agreement recently reached with the government to extend UNICEF’s country programme until the end of 2023, as part of the UN’s transitional framework.

“After more than three and a half months of war, UNICEF and partners are taking stock of the humanitarian response so far and directing efforts in the next period to those areas most in need. We have been in Ukraine since 1997 and have stayed throughout the escalation of the conflict to deliver support and protect the lives of children and families. To date, UNICEF has reached over 2 million people with health supplies and access to safe drinking water. More than 600,000 children & caregivers have received mental health and psychosocial support and more than 180,000 children have been engaged in formal and community-based learning.

“We have partners on both sides of the contact lines who work to reach children with critical information and life-saving supplies and services. We have activated the rapid response missions in the east of the country, closest to the fighting, and as a result, we have assisted families in over 100 shelters close to the front lines and in hard-to-reach locations. However, despite intensive efforts to ensure safe, rapid and unimpeded humanitarian access, significant challenges remain in the most affected areas across the country, and we continue to call for safe, unfettered access to reach children wherever they may be.

“In central and western parts of the country, where it is currently a little more stable, we provide support and strengthen the services and local authorities that are already there, such as local authorities and NGOs. One example is the Spilno (Together) Child Spots – places where parents and their children can go to access support services including therapy and psychosocial support, gain supplies and information, and have a chance to give their children safe play and normality, whilst they sit with other parents, and gain some brief relief and guided peer support. I saw how critical this support is at a Spilno centre in Bucha, where the staff estimated that half of children attending required psychosocial support of some kind.

“In Irpin, I visited two schools damaged in the fighting, putting the education of almost 2,000 children at risk when the new school year begins in September. Whilst we do not have verified figures for the number of damaged schools in the country, the figure is likely to be in the thousands. Repairing schools is a priority for UNICEF and the government so children can return to safe-blended- learning in September.

“Thanks to the generous support of governments, companies, and individuals we can continue this work across the country and region, including humanitarian cash transfers to extremely vulnerable families.

“Ultimately, as important as this work is, children need peace.

“UNICEF continues to call for an immediate ceasefire in Ukraine and to protect all children from harm. Every day that this war continues, is increasing the long-lasting, devastating impact on children, in Ukraine, in the region and across the world.” 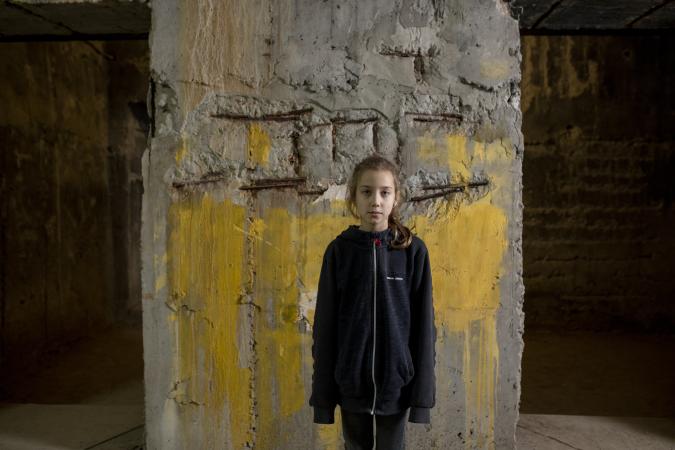