53,500 children and adolescents participating in after-school interventions and/or summer activities to support their well being

332,000 people accessing a sufficient quantity and quality of water

50,000 people sharing their concerns and asking questions through feedback mechanisms

The situation in the State of Palestine remains a protracted protection crisis characterized by ongoing occupation, with around 2.1 million people needing humanitarian assistance, among them 1.1 million children.

The humanitarian situation is exacerbated by the closure of the Gaza Strip and recurrent escalation of hostilities there, the internal Palestinian divide, the ongoing fiscal crisis, slow economic recovery, the coronavirus disease 2019 (COVID-19) pandemic and the consequences of the ongoing war in Ukraine. The COVID-19 outbreak further strained health care systems, increased economic degradation, and contributed to high unemployment. All these factors put pressure on the socioeconomic and cultural fabric of Palestinian society. From January to August 2022, 37 Palestinian children were killed, and at least 686 children were reported injured. During the same period, 404 children were arrested in East Jerusalem.

The Multi-Sectoral Needs Assessment in 2022 indicated overall deepening vulnerabilities and a 12 per cent increase in the number of vulnerable children compared with 2021, a trend likely to continue in 2023.

The August 2022 escalation of hostilities in the Gaza Strip left thousands of children in need of support. The high rate of unemployment and lack of economic opportunities is impacting many households, increasing their dependency on aid/assistance (particularly in the Gaza Strip) and contributing to their high reliance on negative coping mechanisms. The situation in the West Bank, including East Jerusalem, remains tense, with the potential for increased violence, military operations, arrests, demolitions and evictions in Area C.

In the Gaza Strip, 40 per cent of households reported at least one member of their household experiencing signs of psychosocial distress or trauma last year. Protection concerns in the West Bank are directly linked to the safety of children at school or traveling to and from school, non-enrollment of children in school or children dropping out of school. Overall, 1.9 million people are severely affected by protection concerns, of whom 678,000 need child protection services and 816,000 need mental health and psychosocial support.

Around 5.7 per cent of school-age children in the Gaza Strip dropped out of school during the 2021-2022 academic year due to school-related expenses, children's need to work or schools not being inclusive. Dropout rates in the West Bank are estimated at 19 per cent, primarily due to protection risks and school closure. Thus 608,500 people (96 per cent children) will need education support in 2023.

Essential health-care needs are also high, driven by the high cost of services, access problems in areas C, H2 and East Jerusalem, and lack of availability of treatment and medicine in the Gaza Strip, affecting 1.6 million people, including 809,000 children.

Most Gaza Strip households have piped water, yet only 3.2 per cent use it for drinking. In the West Bank, households have to revert to other strategies to overcome the lack of sufficient drinking water. In total, 1.4 million people are in need of humanitarian support to improve access to safe drinking water.

In 2023, UNICEF will continue to address the most acute humanitarian needs in the State of Palestine while working closely with partners to foster synergies between the organization's humanitarian and development work. UNICEF will support systems strengthening across all sectors and generate evidence on the impact of violence and grave violations on children, and on education-related incidents, for high-level advocacy with all parties.

UNICEF will improve access and use of child protection services for the most vulnerable, while the education sector will support access to mental health and psychosocial support interventions and the continuity of quality learning in safe and inclusive learning environments. In the Gaza Strip, due to significant learning losses, UNICEF will provide remedial education and essential learning materials.

UNICEF will provide life-saving health and nutrition interventions, including essential newborn care and support for infant and young child feeding in emergencies. UNICEF will support the provision of quality age- and gender-responsive health, nutrition and development services and the procurement of essential medical and nutrition supplies. The water, sanitation and hygiene (WASH) programme will address critical humanitarian needs by ensuring equitable, affordable, sustainable and safely managed access to WASH services. UNICEF will provide water treatment chemicals for safe water, improve WASH services at the community level, in schools and in health facilities and provide hygiene supplies to promote personal hygiene.

Social and behavioural change will be mainstreamed, addressing key gender and stigma-related barriers through community engagement and empowerment. Together with the Humanitarian Country Team and other United Nations agencies, UNICEF will roll out initiatives on prevention of sexual exploitation and abuse and accountability to affected populations, ensuring appropriate reporting mechanisms are in place at all levels.

With a presence in the West Bank, including East Jerusalem, and in the Gaza Strip, UNICEF will ensure access to affected populations while promoting local-level partnerships and community (including adolescent and youth) participation. Preparedness will be embedded throughout the programme, seeking opportunities to enhance the humanitarian and development nexus and risk-informed programming and fulfil UNICEF Core Commitments. Risk monitoring and management will be prioritized. Minimum emergency supplies will be pre-positioned, with contingency agreements with key partners for a timely response. UNICEF will continue to lead the WASH Cluster, the Child Protection Area of Responsibility and the nutrition working group, and will co-lead the Education Cluster.

Humanitarian Action is at the core of UNICEF’s mandate to realize the rights of every child. This edition of Humanitarian Action for Children – UNICEF’s annual humanitarian fundraising appeal – describes the ongoing crises affecting children in the State of Palestine; the strategies that we are using to respond to these situations; and the donor support that is essential in this response. 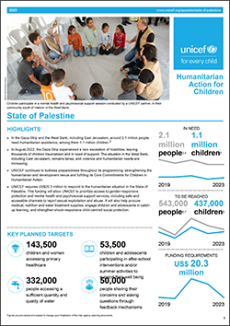 Download the full appeal to find out more about UNICEF’s work and targets for the State of Palestine.
2023 HAC appeal (PDF, 926 KB)