Myanmar is witnessing an unprecedented escalation of conflict and violence, triggered by the military takeover of February 2021. Attacks against civilians are increasing and a peaceful civil disobedience movement has evolved into armed resistance, while armed conflict at border areas is surging. With the COVID-19 pandemic worsening and the economy contracting, Myanmar is experiencing a profound humanitarian and human rights crisis, threatening the lives and well-being of its 17 million children.

Around 14.4 million people – 25 per cent of the population – need humanitarian assistance. As of February 2021, approximately 211,000 people are displaced internally in Myanmar, including 129,000 Rohingya confined since 2012. The fighting has caused many more to flee, with an estimated 275,000 displaced, including in areas that have not seen conflict for many decades such as Chin, Sagaing and Magway. There are also extremely vulnerable non-displaced people, including 417,000 stateless Rohingya and communities affected by conflict, insecurity and rising poverty in rural areas and cities such as Yangon and Mandalay that are under martial law. There are ongoing and severe human rights violations, with hundreds killed, thousands detained, and unknown numbers allegedly tortured and raped. Access to people in need of protection and assistance is severely constrained by insecurity, COVID-19 restrictions and increasing bureaucratic impediments. Furthermore, the functionality of financial and banking services and the entire supply chain, including procurement, import/export and in-country transportation of supplies, has been severely disrupted.

Prior to the military takeover, just over one third of the population were living below the poverty line and millions more could be forced into poverty, as rising prices and collapsing financial services deplete household income. Hard-won gains in child rights are being reversed, with children killed, wounded, detained and witnessing terrifying scenes of violence. Almost 12 million children are struggling to access education, due to attacks on schools and COVID-19 school closures. Already weakened health services are on the verge of collapse, with health workers experiencing intimidation and violence. Almost 1 million children are missing out on routine immunization and 5 million are missing out on vitamin A supplementation. Access to water, sanitation and hygiene are disrupted, with more than 3 million children lacking access to a safe water supply at home, threatening a large-scale outbreak of diarrhoea. Before the crisis, many children were experiencing malnutrition, with almost 30 per cent of pre-school children experiencing stunting and many experiencing wasting, including in Rakhine, where nearly 15 per cent are wasted.

UNICEF’s humanitarian strategy in Myanmar is aligned with the final 2022 Humanitarian Needs Overview and Humanitarian Response Plan. UNICEF will continue to support cluster coordination, leading the nutrition and WASH clusters and co-leading the education and child protection sub-clusters. In response to the crisis, UNICEF is adapting the way it works to achieve continuity of critical services at scale, coordinating with an extensive and diverse network of partners, including national and international NGOs and private sector partners, and drawing on its strong field presence through its two main offices and seven field offices. UNICEF will focus on reaching the most vulnerable children, including displaced, stateless, children with disabilities and those in hard-to-reach areas, including areas under martial law.

With millions exposed to violence, abuse and exploitation, UNICEF will support children’s access to mental health, psychosocial support and quality legal aid, as well as contribute to mitigating the risks posed by landmines and explosive remnants of war and monitoring and reporting of grave child rights violations. UNICEF will protect children from falling into extreme poverty, generating data and evidence on the impact of the crisis, and providing unconditional cash grants. UNICEF will increase children’s access to safe learning environments, including through complementary and distance-learning opportunities for primary and middle-school aged children, as well as non-formal education for children who were out of the formal system even prior to the current range of crisis.

With the health system under threat, UNICEF will provide life-saving emergency medical services to pregnant women, new mothers, and children, procure essential medicines and supplies to save lives, as well as COVID-19 infection prevention and control, and case management. With nationwide routine immunization suspended, UNICEF will work to carry out routine immunization at the community level throughout the country. WASH programming will focus on the delivery of clean water to vulnerable households in urban and rural areas, as well as provision of life-saving interventions to vulnerable populations, including displaced populations. UNICEF will screen and treat children with severe acute malnutrition, as well as provide life-saving micronutrient supplements and strengthen infant and young child feeding practices.

UNICEF will integrate initiatives to ensure protection from sexual exploitation and abuse, mitigate the risk of gender-based violence and promote accountability to affected populations (AAP) throughout UNICEF-supported programmes. Across its programmes, UNICEF will seek to provide durable, cost-effective solutions that will help strengthen the resilience of local communities and institutions.

Humanitarian Action is at the core of UNICEF’s mandate to realize the rights of every child. This edition of Humanitarian Action for Children – UNICEF’s annual humanitarian fundraising appeal – describes the ongoing crises affecting children in Myanmar; the strategies that we are using to respond to these situations; and the donor support that is essential in this response. 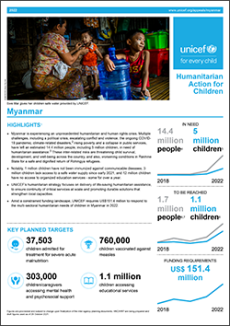 Download the full appeal to find out more about UNICEF’s work and targets for Myanmar.
Download file
(PDF, 5,18 MB) 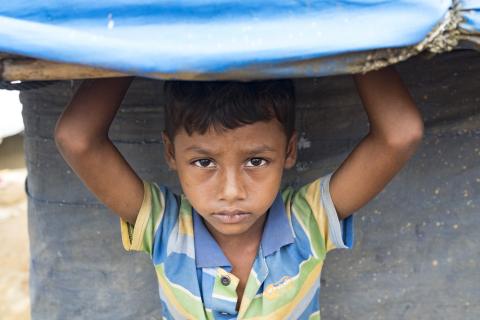 Rohingya children and young people want more than survival – they want a hopeful future, too