Protracted and new disasters have impacted a staggering number of people in Eastern and Southern Africa, and in 2020 will require substantial effort in terms of emergency preparedness and response strategies, mechanisms, tools and partnerships. More than 33 million people in the countries covered in this regional appeal, including nearly 17 million children, are in need of humanitarian assistance due to climate-related shocks, health emergencies, conflict, economic shocks and displacement.

Since the beginning of the southern African monsoon season in 2019, rainfall deficits have led to lower seasonal production, food deficits, price increases, lack of access to clean water, growing food insecurity and a rising number of severe malnutrition cases in many countries in the region. Some 2 million people affected by climate shocks in seven countries are included in the scope of this regional appeal.

The public health risk in the region is also growing, with 10 out of 21 countries reporting cases of cholera and acute watery diarrhoea. The Ebola outbreak in the Kivu and Ituri provinces of the Democratic Republic of the Congo continues to threaten neighbouring countries. Other health risks include outbreaks of measles in the Comoros and dengue fever in the United Republic of Tanzania.

The United Republic of Tanzania and Zambia are also hosting and responding to the needs of more than 330,000 refugees from Burundi and the Democratic Republic of the Congo, including 230,000 children on the move.

Humanitarian funds channelled through the UNICEF Eastern and Southern Africa Regional Office are strategically allocated to country offices to facilitate the organization's response to the most pressing needs of children across the region. These funds enable countries to enhance their preparedness and response to emergencies, particularly emergencies that require a multi-country, integrated and immediate response, but that are not large enough in scale to warrant a standalone country appeal.

This appeal focuses on four components in line with the Core Commitments for Children in Humanitarian Action.

Humanitarian Action is at the core of UNICEF’s mandate to realize the rights of every child. This edition of Humanitarian Action for Children – UNICEF’s annual humanitarian fundraising appeal – describes the ongoing crises affecting children in Eastern and Southern Africa; the strategies that we are using to respond to these situations; and the donor support that is essential in this response. 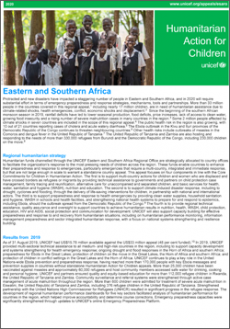 Download the full appeal to find out more about UNICEF’s work and targets for Eastern and Southern Africa.
Download file
(PDF, 206,61 KB)