East Asia and the Pacific, which is home to 70 per cent of people affected by disasters globally, is one of the most disaster-prone regions in the world. Apart from the current risks associated with the coronavirus disease 2019 (COVID-19) pandemic, the region is exposed to risks related to climate change, rapid urbanization, migration and population growth, which are aggravating existing vulnerabilities.

Between January and August 2019, 44 major emergency events were recorded in the region, 80 per cent of which were the result of extreme weather events that developed into floods/landslides, storms, epidemics, outbreaks of vaccine-preventable diseases (e.g., measles, polio, etc.), vector-borne diseases, drought and snowstorms. Indonesia, the Pacific Islands, the Philippines and Timor-Leste are situated on the Pacific Ring of Fire, which is at high risk of earthquakes and tsunamis.

In addition, protracted crises due to unresolved conflict and ethnic strife in the Democratic People's Republic of Korea, Myanmar, Papua New Guinea and the Philippines continue to affect the lives of children and their families. In 2018, over 9.3 million people were internally displaced in East Asia, including 236,000 people internally displaced due to conflict in Myanmar and the Philippines. This accounts for one third of new displacements globally. Crises in the region also generate the highest number of internally displaced persons associated with natural hazards, and this trend is increasing with the adverse impacts of climate change.

There are also growing climate risks, including floods, drought and extreme weather (e.g., hurricanes and cyclones, torrential rains, storm surges, sand or dust storms, heatwaves, wildfires and cold spells). The United Nations Economic and Social Commission for Asia and the Pacific reports that these climate-induced events are having “threat multiplying” impacts, not just on economies and populations, but also on national security concerns, conflict, political tensions, the displacement of people across borders and internally, and the transboundary sharing of scarce natural resources.

On 6 April 2020, the severe Tropical Cyclone Harold slashed through Fiji, Solomon Islands, Tonga and Vanuatu, leaving destruction in its wake. The cyclone compounded the burden on these countries, which were already struggling to cope with the impacts of the COVID-19 pandemic.

The cyclone was most destructive in Vanuatu, where it made landfall as a Category 5 cyclone. In the island of Pentecost, 90 per cent of houses, public infrastructure and gardens were destroyed, including food crops, clean water sources and health facilities. In the three most affected provinces of Vanuatu, 61 per cent of health facilities suffered moderate or severe structural damage, 39 per cent had damaged medical equipment and 35 per cent lost some or all of their medical supplies. Across all four countries, more than 433,000 people were affected by the cyclone. Some 110,300 of them, including 47,500 children are in the worst affected areas and require immediate humanitarian assistance, particularly access to clean drinking water, health and nutrition services, protection and continuity of education for children.

Preventive measures taken by Pacific governments against the COVID-19 pandemic, including travel restrictions and limited freight and transport opportunities, have added an additional layer of complexity to the response.

The UNICEF humanitarian strategy in East Asia and the Pacific focuses on seven priorities:

Given that regional and national capacities for disaster risk management are improving, albeit at very different paces among countries, UNICEF is increasingly shifting its emphasis from direct response to building national and local government capacities for prevention, mitigation, preparedness, response and recovery. In most cases, however, UNICEF still plans to maintain its internal readiness to respond to emergencies where and when needed.

In response to Tropical Cyclone Harold, UNICEF, in coordination with the Pacific Humanitarian Country Team, is providing immediate life-saving response and early recovery and rehabilitation assistance to affected children and women.

Humanitarian Action is at the core of UNICEF’s mandate to realize the rights of every child. This edition of Humanitarian Action for Children – UNICEF’s annual humanitarian fundraising appeal – describes the ongoing crises affecting children in East Asia and the Pacific; the strategies that we are using to respond to these situations; and the donor support that is essential in this response. 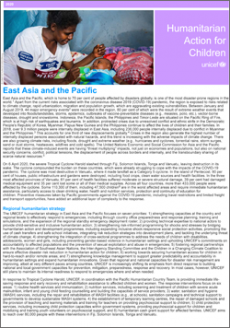 Download the full appeal to find out more about UNICEF’s work and targets for East Asia and the Pacific.
Download file
(PDF, 208,41 KB)

Humanitarian Action and Emergencies
East Asia and the Pacific