755,000 people accessing a sufficient quantity and quality of water

Burkina Faso is affected by a severe multidimensional humanitarian crisis due to insecurity, demographic pressures, climate change, political fragility and economic and health crises. Insecurity has resulted in massive internal displacements, with 1.7 million people internally displaced, 60 per cent of them children. The humanitarian space has significantly contracted, and more than 1 million people are estimated to be completely isolated and unable to access essential social services, markets or essential supplies.

In 2022, 595 out of 2,158 health facilities were affected by insecurity, depriving more than 2.1 million people of access to health services. The lack of coverage of immunization services in several areas has contributed to the resurgence of measles and polio in a context also marked by a decline in epidemiological surveillance at all levels.

The nutritional status of children has worsened, with 179,252 children suffering from severe wasting. Access to water has deteriorated due to increased attacks on water points, sabotage of electricity pylons and the dramatic increase of pressure on water resources due to the massive influx of displaced people in several host communities. The deteriorating water situation brings increased risks of such waterborne diseases as cholera and hepatitis E.

In the education sector, 4,258 schools were closed (17 per cent of schools), due to insecurity and attacks on educational infrastructure and staff, depriving more than 700,000 children (nearly 340,000 girls) of access to education and affecting more than 20,000 teachers. Children continue to be exposed to protection risks, with abuse and violence negatively impacting their psychosocial well-being. Forty-seven per cent of people interviewed recently reported having difficulty concentrating, cases of isolation or unusual behaviours in affected children. Additionally, 10,384 children will be at risk of family separations.

The Children’s Climate Risk Index rating for Burkina Faso was 7.6 in 2021, placing the country in the high risk category. The impact of climate change (drought, floods) makes crises more common and harder to recover from.

There has been an increase in deprivation and multidimensional poverty since 2020. In 2021, 7 out of 10 children aged 0-17 years were deprived of sanitation, health and housing services, compared with 4 out 10 in 2020. As social spending declines due to the priority given to security issues, households struggle to meet their basic needs.

UNICEF will support authorities to address the most urgent needs of 3.7 million vulnerable people, including nearly 2.3 million children, by investing in such localized responses as the community-based rapid response and resilience (3RC) approach. UNICEF will maintain access to vulnerable people in crisis-affected zones, especially in isolated and hard-to-reach areas (including besieged towns). Work will include innovative programmatic models that show the synergy and complementarity between emergency response and development action. UNICEF will mainstream community engagement and accountability approaches to fully integrate communities into programmes.

UNICEF will support the roll-out of the national social protection policy, while providing multisectoral cash transfers to support the most vulnerable households to cope with and recover from climate and conflict-related shocks.

UNICEF will continue building the resilience of systems, communities and people by strengthening the capacity of community-based health workers to ensure the continuity of integrated community case management, including home care for newborns and immunization; epidemiological surveillance. UNICEF will also increase support to decentralized structures for the transportation of medical supplies; scale up the integrated nutrition response through a multisectoral, multi-stakeholder approach; and invest in the prevention of stunting and treatment of severe wasting in health facilities and at the community level where health facilities are closed.

UNICEF will strengthen access to quality WASH services for vulnerable populations by reinforcing support to community resilience and sustainability. UNICEF will work more closely with local partners, strengthening the capacity of water utility authorities to ensure the delivery of safe drinking water. UNICEF will also support construction and rehabilitation of sanitation facilities; hygiene awareness; and capacity building of communities and partners. Vulnerable children will be reached with non-formal, remedial, vocational, accelerated and formal education, either remotely or in person, including for early childhood development.

UNICEF will use a multisectoral approach to strengthen children’s environment and protect them from different forms of abuse, exploitation and neglect. Through the case management system, children identified based on harmonized vulnerability criteria will benefit from specific, holistic and needs-based care, including temporary care for unaccompanied or separated children, mental health and psychosocial support, birth registration and other services. UNICEF will strengthen the mobile child protection approach in hard-to-reach areas to improve access to services. Finally, UNICEF will strengthen mine education programmes and themonitoring and reporting of grave violations against children by parties to conflict, including recruitment and use, killing and maiming and sexual violence.

Humanitarian Action is at the core of UNICEF’s mandate to realize the rights of every child. This edition of Humanitarian Action for Children – UNICEF’s annual humanitarian fundraising appeal – describes the ongoing crises affecting children in Burkina Faso; the strategies that we are using to respond to these situations; and the donor support that is essential in this response. 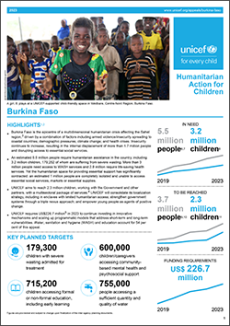 Download the full appeal to find out more about UNICEF’s work and targets for Burkina Faso.
2023 HAC appeal (PDF, 4,15 MB)