The crisis in Afghanistan has been ongoing for over 18 years, and humanitarian needs driven by armed conflict, natural disasters and poverty are on the rise. In 2020, over 9.4 million people (56 per cent children) will require humanitarian and protection assistance.

Half of the population of Afghanistan – nearly 17 million people – live in conflict-affected areas and 103 districts are assessed as hardest to reach. The people of Afghanistan are routinely exposed to human rights violations, including deliberate attacks on schools and health facilities, sexual and gender-based violence and forced recruitment. Between January and September 2019, over 280,000 people (58 per cent children) were newly displaced by conflict and 336,000 people had returned to Afghanistan.

One third of school-aged children (3.7 million children, including 2.2 million girls) are out of school, and 2 million of these children live in conflict-affected areas. An estimated 2 million children under 5 years and 485,000 pregnant and lactating women are affected by acute malnutrition, and nearly 600,000 children are at risk of severe acute malnutrition (SAM) in 2020. Direct and indirect violence against humanitarian personnel and assets/facilities continues to challenge humanitarian access, with 319 such incidents recorded between January and September 2019.

300,000 children under 5 years with SAM admitted for treatment

210,000 children and adolescents provided with access to quality education

UNICEF operations in Afghanistan will be led by its five field offices and six outposts to enable countrywide coverage and quality programming. As lead of the nutrition and water, sanitation and hygiene (WASH) clusters and the child protection area of responsibility and co-lead of the education cluster, UNICEF will enable strategic planning, coordinated response, capacity building of partners and advocacy at the national and state levels.

Life-saving humanitarian assistance will be provided through the delivery of a timely, effective and integrated package of nutrition, health, WASH, child protection and education services. Sub-district health centres and mobile teams will provide hard-to-reach crisis-affected people with vital health and nutrition services. Education interventions will be expanded to include a multi-sectoral component incorporating WASH and child protection, including psychosocial support and referrals, which will increase programme costs.

To improve humanitarian action and development programme linkages, UNICEF will invest in preparedness measures and risk-informed programming to strengthen local and community capacities by applying durable solutions to the most pressing needs of affected populations. Emergency cash programming will be implemented using common cash systems through inter-agency mechanisms such as the Cash Working Group. UNICEF will also promote crosscutting work in communication for development, accountability to affected populations, early childhood development and gender to promote community resilience.

Humanitarian Action is at the core of UNICEF’s mandate to realize the rights of every child. This edition of Humanitarian Action for Children – UNICEF’s annual humanitarian fundraising appeal – describes the ongoing crises affecting children in Afghanistan; the strategies that we are using to respond to these situations; and the donor support that is essential in this response. 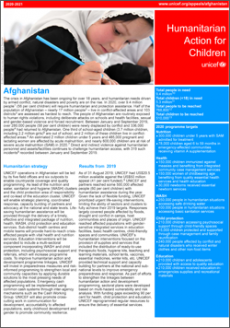 Download the full appeal to find out more about UNICEF’s work and targets for Afghanistan.
Download file
(PDF, 183,82 KB)