Following the completion of a new solar-powered water project, the inhabitants of Al Ghayl district, in Al Jawf governorate have now access to safe drinking water into their homes.

Sa’ada, Yemen, 11 June 2019 - In northern parts of Yemen, water scarcity and poor sanitation prevent children from living a normal life where they can grow up healthy, have access to safe drinking water and go to school. Almost 18 million people, half of them being children, are in need of assistance to reach appropriate levels of water, sanitation and hygiene living conditions across the country.

These challenges existed before the current conflict broke out four years ago and contributed to the spread of epidemic diseases such as cholera, which remains a real risk in 2019. Over 724,000 suspected cases of cholera have been detected since January 2018, with 1,135 associated deaths and children under five years old representing more than a quarter of the suspected cases.

In response to this outbreak, UNICEF delivers critical water and sanitation services to affected populations to contain the outbreak and prevent further spread. With the support of its partners, UNICEF covers over three quarter of the overall water, sanitation and hygiene response to cholera in Yemen, this includes in the 21 priority governorates with essential interventions such as the deployment of Rapid Response Teams at household level, chlorination of water supply systems, hygiene promotion, operational support to local water authorities and sanitation interventions.

Sa’ada and Al Jawf, two northern governorates in Yemen, are a good example of the joint efforts of UNICEF and its local partners, which contribute to develop and maintain cost-effective water infrastructure through an innovative approach, using solar energy with the communities being at the centre of the project, to ensure both project’ sustainability and communities’ resilience.

In Sa’ada, these WASH activities are implemented thanks to the contribution of King Salman Humanitarian Aid and Relief Centre (KSRelief), which is a key partner of UNICEF in its humanitarian response for the children of Yemen, especially in the WASH sector. Thanks to KSRelief’s contribution, UNICEF has reached a total of 944,500 people with construction of high capacity water reservoirs in Sa’ada, Lahj and Hadramaut and 1,236,000 people with rehabilitation of sewage disposal sites to improve waste water treatment in urban areas.

Thanks to six ongoing solar-powered water projects in both governorates, an additional total of 37,860 beneficiaries will soon have access to safe drinking water into their homes. 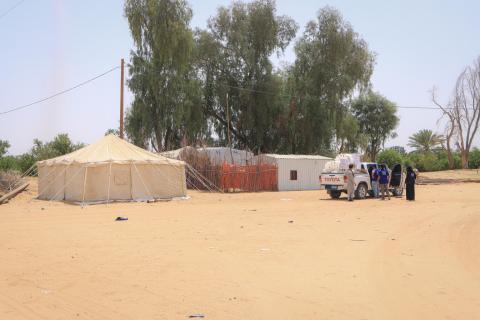 UNICEF and its partner agencies have distributed more than 57,000 RRM kits across 21 governorates in Yemen, benefitting over 400,000 newly displaced people