Solar-power brings water to vulnerable children and their families

Biggest solar-powered water pumping systems in the country installed, to ensure access to safe drinking water to the vulnerable populations living in high-risk cholera areas or with a large population of internally displaced people

Sa’ada, Yemen, 28 February 2019 – Even before the current conflict broke out four years ago, Yemen was one of the world’s most water-scarce countries. The conflict has had devastating consequences on the already weak water and sanitation infrastructures, putting more than 16 million people, including 8 million children in urgent need of water, sanitation and hygiene (WASH) assistance.

In Sa’ada, the situation is particularly dire and takes a heavy toll on the health of its inhabitants. This area is severely affected by the ongoing armed conflict and the population is suffering from water scarcity, poor infrastructures and limited or inexistent access to most basic services. This has led to an easy spread of water-borne diseases such as cholera and acute water diarrhoea. The inhabitants used to depend on non-potable water trucks, especially in Sa’ada old city, where small quantities of water were delivered once every two or three weeks.

Access to clean water remains crucial for the survival of children and their caregivers. Together with its partners, UNICEF has been scaling up its emergency WASH assistance in all of Yemen to ensure sustainable services through capacity building of local WASH authorities, solarization of water systems and supporting rain water harvesting, among others.

With the support of local authorities and resource partners, UNICEF has implemented the biggest solar-powered water pumping systems in the entire country, to ensure access to safe drinking water to the vulnerable populations living in high-risk cholera areas or those with a large population of internally displaced people, such as in Tolomus and Musalhaqat, which are part of Sa’ada city. Now, people of Sa’ada get sufficient water supply every two days.

The two WASH projects are helping to pump water, distributed through a pipe network that brings clean and safe water to more than 55,000 people or 70 per cent of the total population of Sa’ada city. “We are so thankful for this project,” says Yahya Hadi, who lives in Musalhaqat area. “We have direct water connections in our houses now thanks to the water meters. We don’t need to go to fetch water or pay for water trucking anymore, which was very expensive for us.”

Through this intervention, UNICEF is also building the capacity of the Local Water and Sanitation Corporation (LWSC) of Sa’ada to manage WASH services. “With the support of UNICEF, we managed to revive the LWSC in Sa’ada. Last year, we couldn’t do our job. We had no offices, no staff, no equipment, no fuel and no vehicles to carry out our urban water projects. But after receiving UNICEF support, we are finally able to function independently and we are proud to make a difference for our people in urban areas of Sa’ada,” stresses Mohammed Qasim Al Saadi, President of the LWSC in Sa’ada, one of the local water partners UNICEF works closely with.

UNICEF and its partners will soon launch the third phase of this WASH project, to reach an additional 12,000 people with access to safe drinking water.

In Sa’ada, UNICEF WASH interventions have been implemented thanks to the support of committed donors. The first stage of the Tolomus water project in 2017 was implemented with support from United Kingdom government through the Department for International Development (DFID), which funded the installation of the solar panels of three water solar systems. The second phase for the Tolomus and the Musalhaqat water projects in 2018 were carried out with contributions from the Kingdom of Saudi Arabia, which funded the solar panels installation. Another joint contribution of the Kingdom of Saudi Arabia and United Arab Emirates to UNICEF Humanitarian Response in Yemen was used to lay the pipe networks. This year, Kuwait is supporting the third phase of both projects, to ensure that more inhabitants of Sa’ada can enjoy access to clean water in their homes and protect themselves easily against diseases.

UNICEF and its partners continue to support the maintenance of operational water supply systems across Yemen. With their efforts, nearly 5 million people had access to safe drinking water and almost one million gained access to emergency safe water supply in 2018. 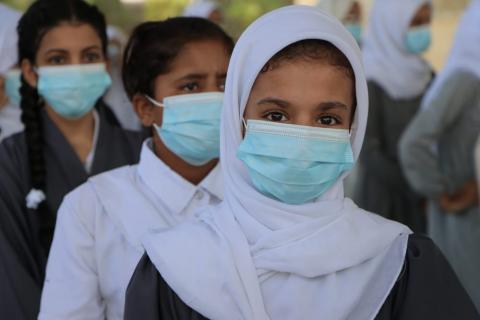 SCHOOLS REOPEN IN YEMEN AFTER MONTHS OF CLOSURE DUE TO COVID

The education of children in Yemen has already been severely affected by conflict and COVID-19 came as an additional strain.