Building resilience to crisis in Myanmar together 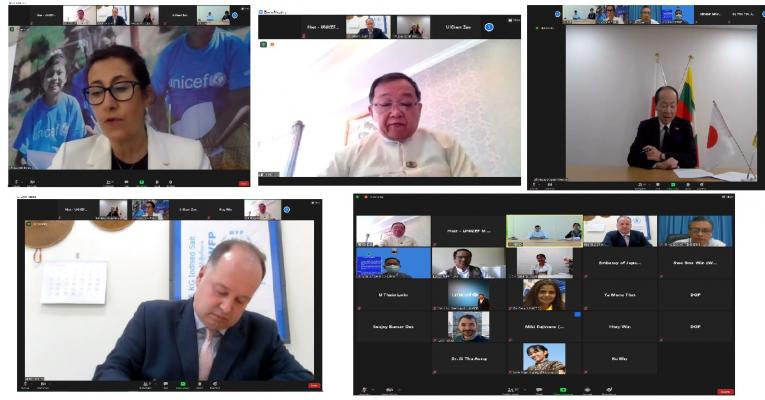 YANGON, 22 December 2020 – UNICEF Myanmar and the Government of Japan today launched a US$4.71 million project to build the resilience of approximately 400,000 people in Myanmar against shocks from conflict, climate change and other crises. The  project’s virtual signing ceremony took place with the participation of UNICEF Myanmar Deputy Representative (Programmes) and Officer-in-Charge, Alessandra Dentice, Ambassador of Japan to Myanmar, Ichiro Maruyama, Government representatives from Ministry of Investment and Foreign Economic Relations, Ministry of Education, Ministry of Health and Sports, Ministry of Agriculture, Livestock and Irrigation and Ministry of Social Welfare, Relief and Resettlement along with the World Food Programme (WFP).

Funded by the Government of Japan, the 24-month project will build the resilience of people in three states – Rakhine, Kachin and northern Shan – against shocks and stresses associated with conflict, climate change and other complex crises. These three states are among the worst affected by conflict and other forms of crisis in Myanmar. Interventions funded through the project entitled “Health, Water Sanitation & Hygiene and Education assistance for internally displaced persons and neighboring communities in conflict affected areas” will focus on building resilience to crisis by strengthening capacity of health, water, sanitation and hygiene, and education services. These will include interventions to strengthen health service delivery for newborns, children aged under-five and pregnant women; interventions to support equitable access to safe and affordable water, sanitation and hygiene services; and interventions to strengthen provision of quality, inclusive education in a safe learning environment. The project will also include important focus on resilience to crisis and building capacities for early recovery.

“People in Rakhine, Kachin and northern Shan are increasingly vulnerable to a range of different crises. Helping individuals, families and communities to build resilience and respond to crisis is essential. We are grateful to the Government of Japan for their support and partnership in this important endeavor,” said UNICEF’s Alessandra Dentice.

Rakhine, Kachin and northern Shan are facing important challenges around displacement of populations. While new population displacements, including of vulnerable populations of children and women are taking place in Rakhine, Kachin and northern Shan are seeing new inflows of returning populations. Displaced groups often lack sustained assistance to ensure their safe return and there is a concern that new shocks, including conflicts and attacks linked to inter-communal violence, may occur, leading to further displacements.

The development situation in these states is also of serious concern: recent data shows that the under-five mortality rate in Rakhine State is 58 deaths per 1,000 live births and that 52 percent of the state’s children have not received basic vaccinations. In rural areas, only 55 per cent of the population has access to basic sanitation and 44 per cent to basic drinking water supplies, the lowest of all states and regions across the nation.

In addition to this already complex situation, a recent study predicts that around two million children in Myanmar will fall into poverty by the end of the year as a result of the socio-economic impacts of the COVID-19 pandemic.

UNICEF and the Government of Japan are strongly committed to working together in partnership to bring about sustainable improvements to the lives of children and women in Myanmar. 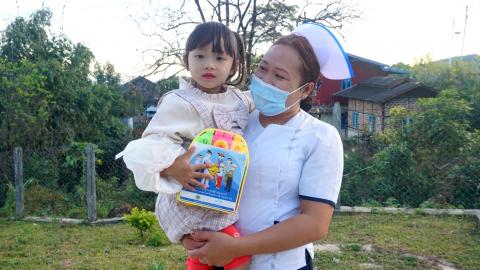 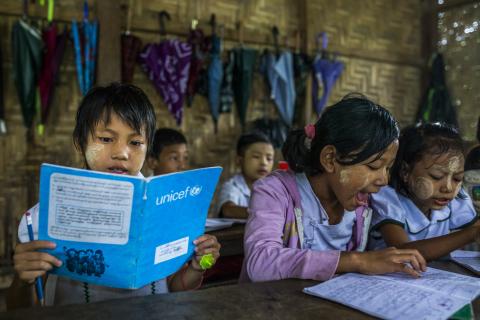 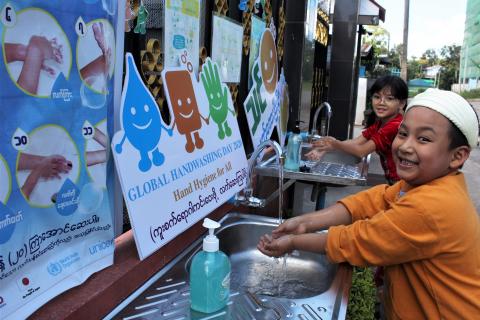 Sharing the message: ‘Hand Hygiene for All’ on Global Handwa