Learn how UNICEF works for children's rights in Mozambique

How UNICEF works for children's in Mozambique

For almost 50 years, the United Nations Children's Fund (UNICEF) works in Mozambique, to reach the most disadvantaged children. To save their lives. To defend their rights. To help them fulfill their potential. With a strong presence in the most vulnerable provinces in Mozambique, Zambezia and Nampula, we work for every child, everywhere, every day, to build a better world for everyone. And we never give up.

UNICEF works in 190 countries and territories. UNICEF opened its first office in Mozambique in 1975.

Let us reflect on a school girl living far from a health facility who has to act fast to save her sick baby brother’s life; a poor, young, single mother of four who is living with HIV and caring for her malnourished baby; a husband who joins the rest of his community’s efforts to improve sanitation and builds a toilet in his rural homestead; a teacher who puts herself through night school and continues to improve her skills; a young girl living in multidimensional poverty determined to attend primary school, although she has to hide her school books in case her uncle rips them up; a grandmother who fled her flooded home along with her orphaned grandchildren, who now works with the local school council to make her community’s homes and schools safer; and a young woman who feels she has nobody to discuss her sexual  and reproductive health with, who seeks advice from her peers using a mobile technology programme. These real-life stories are not unique. These are some of the stories that UNICEF Mozambique country programme is tackling, helping to find a positive outcome in the lives of children, adolescents, and their families.

UNICEF has supported Mozambique for almost four decades. During this time, the country has been faced with numerous significant challenges including war, post-conflict recovery and peace-building, poverty, recurrent natural disasters and the surge of HIV and AIDS.

In the late 1960s, UNICEF began cooperating with pro-independence movements in the Portuguese-administered African Territories, including Mozambique, providing assistance for basic services such as health, nutrition, rural water supply, education and emergency relief.

A UN fact-finding mission visited Mozambique in February 1975. This led to the first ongoing commitment of US$ 1.2 million by UNICEF, allocated for a mass vaccination campaign, primary health interventions, rural water supply and the rehabilitation of teacher training centers.

After Mozambique’s independence from Portugal on 25 June 1975, UNICEF opened its first office in Maputo, staffed with a Representative and an Assistant Project Officer.

UNICEF believes that partnerships and collaborative relationships are critical to deliver results for children and to realise their rights. Since its inception, the organisation has been engaging in a broad range of partnerships (based on a written agreement, which may involve the exchange of resources) and collaborative relationships (based on an informal agreement and not involving the transfer of resources) with a range of both public and non-public stakeholders including Children themselves, Government entities, Civil Society Organizations, Celebrities, Academia, Foundations, Faith based Organizations, among others. 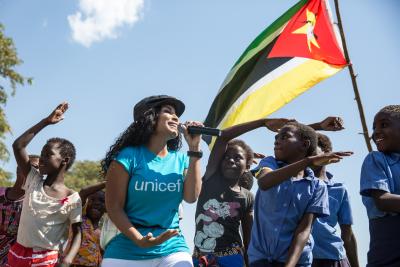 Celebrities working and collaborating with UNICEF have a wide range of talents and achievements, but they all share a commitment to use his professional prestige, celebrity status, and influence in the artistic world, in the media, and among his large fan base, to promote behaviour a change and advocate for the children’s rights.

Over the years UNICEF Mozambique has been working with a range of national artists committed to advance child rights in the country though child participation interventions, media interviews, essays, campaign TV spots and live performances. These artists include renowned painters such as the late Malangatana, Naguib and Gemuce, acclaimed writers such as Paulina Chiziane and Mia Couto, popular singers such as Mingas, José Mucavel, Elvira Viegas and a number of a younger generation of singers including Valdemiro José, Julia Duarte, Isabel Novella, Yolanda Kakana, among others.

From December 2012 to June 2014, the acclaimed musician Stewart Sukuma has formally worked with UNICEF as the first National Ambassador for the organization in the country, following several years of close collaboration, supporting a range of awareness raising awareness, particularly the production of a Facts For Life music album called “Musica é Vida” with the participation or more than 15 leading Mozambican singers including the UNICEF Regional Goodwill Ambassador, the Zimbabwean singer Oliver Mtukudzi.

In November 2014, the Mozambican singer Neyma, who has been collaborating with UNICEF and the Ministry of Health over the past years particularly in national health weeks and breast feeding promotion, was appointed UNICEF Ambassador for Mozambique, and since then has been supporting national efforts to raise awareness among pregnant women to prevent malaria through the use of Mosquito Nets and the Preventive Treatment and also raising awareness against child marriage.

From May 2016 to May 2018, the formal professional basketball player Clarisse Machanguana, a successful role model and example of determination and dedication, with the potential to influence an entire generation of youth with her visionary spirit, was appointed UNICEF Ambassador for Mozambique.  Clarisse Machanguana has been showing high commitment to child rights, with a particular focus on adolescents and girls empowerment. She has also developed her own awareness raising and life skills initiatives with young people mobilizing a range of stake holders partners from Government, donors to development partners, and proactively approached UNICEF for collaboration. She is a respected personality for her integrity, reputation and high networking skills among development partners, line ministries and key influencers in the Mozambique. 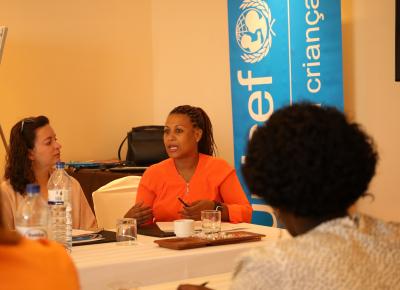 In the current Mozambique’s environment of fast passing growing economy, the private sector has been having an increasingly critical role in supporting and shaping the national social development agenda.  Both the Government and the private sector are actively promoting Public-Private Partnerships and improved workplace policies in areas such as education, malaria prevention and HIV/AIDS, and reported CSR interventions have been benefiting children through, for example, refurbishment of schools, purchase of health equipment and provision of school materials and clothing for young students, among others.

However, sustainable Corporate Social Responsibility (CSR) in the country is still in a nascent phase, mostly based on had hoc, philanthropic and not sustainable interventions as strategic CSR integration in business development and regulation is still limited and not placing the respect and promotion of the best interest of children and their rights in all corporate policies, operations, products, services, initiatives and activities.

Children are not only rights holders, but they are also stakeholders in business as companies interact with them on a daily basis as workers, consumers and community members. Building on its mandate and expertise, UNICEF plays an important role in addressing negative business impacts on children and promoting positive action to support children’s rights in the context of business activities and relationships. UNICEF Mozambique has been developing and fostering Public-Private partnerships in order to leverage resources for women and children in the country, and has been looking into ways to assist corporate partners to further address potential harmful practises - through the promotion of Child Rights and Business Principles - and to develop child-friendly CSR initiatives that goes beyond philanthropy to effectively contributes to sustainable development, including health and the welfare of children.

Support CSOs to engage in Monitoring and advocacy for the rights of the children at national and local level, and to develop a critical thinking on national policies through the production of policy briefs to influence decisions at ministerial level.

Strengthen the capacity of CSOs to participate effectively in decision making foras to voice children’s concern and influence the national and provincial agenda towards the promotion and protection of the rights of the children.