Birth registration is a fundamental human right as it is the legal recognition of a person’s existence and establishes identity, citizenship and family ties.

Nampula-Rapale district, Mozambique – Four-year-old Mariza Iussufo is perhaps not fully aware of the life-changing event that happened to her today, when the enthusiastic crowd at Namachilo community suddenly turned silent as her name was called out. As she quickly replied “yes” with her tiny and delicate voice, her proud father lovingly nudged her forward to retrieve her birth certificate from the Nampula Governor’s representative. As she grows up and enjoys the benefits of the document she held in her hands, Mariza will surely one day understand that her right to be recognized with a legal name and nationality had just been fulfilled.

“Shortly after she was born, my daughter went to live with her mother very far away from here, in Angoche district,” said her father Ussene Iussufo. “They came back one year ago, but time has passed and we never had the chance to register Mariza. I heard about the opportunity to register her here today without having to walk too far, and so we came.”

Mariza was the first of thousands of children to be registered by the accelerated birth registration project, “The Right to Have Rights”, launched today in Rapale district. The project aims to bring birth and civil registration services to more than half a million people in three districts of Nampula Province.

“My daughter’s mother also never had an ID card herself. I brought her along and she got hers too!” said Ussene Iussufo with relief. Thousands of people like her still don’t have their ID cards, as their births were never officially registered anywhere. One of them is Bresneve, who also attended the launch event and got his birth certificate and ID card for the first time at the age of 24. This has been a major barrier for him for employment and to process official documents, and is now resolved, much to his relief.

“The right to have rights” is a public-private partnership between the Ministry of Justice, the Ministry of the Interior, and UNICEF, with funding from the Swedish Embassy of Mozambique and Lúrio Green Resources SA, a forestation company that operates in Nampula Province.

“We are delighted to support this innovative project that we hope will touch the lives of many in Nampula,” said Sweden’s Ambassador to Mozambique, Ms. Ulla Andrén. “Civil registration is a cornerstone of development and a gateway to education, health care jobs, and protection from violence and abuse.”

Birth registration is a fundamental human right as it is the legal recognition of a person’s existence and establishes identity, citizenship and family ties. In Mozambique it is also the basis for acquiring a national identity card, which in turn is required for establishing a bank account and for accessing the social security system, among other things.

“This initiative addresses the inalienable ‘first right’ that every child has to a name and an identity,” said UNICEF Representative Dr. Koenraad Vanormelingen. “The benefits of birth registration will follow a child throughout its life, and this is especially important for the poorest and most marginalised among them.”

With a total budget of $5.2 million, the project aims to provide birth certificates and national identification documents to 520,000 children and adults in the districts of Rapale, Ribaue and Mecuburi in Nampula Province. Less than half of children under the age of 5 in Nampula have birth certificates, with the figure dropping down to only 17 percent for the population aged 0 to 64. Because an ID card cannot be issued without a birth certificate, it is therefore assumed that 8 out of 10 persons in Nampula do not possess an ID card, which is generally required for employment.

“We believe everyone has a right to a legally recognized name and identity, and we are happy to be a part of a project that will guarantee this right to our employees and their families,” said Mr. Carlos Augusto, Human Resources Manager of Lúrio Green Resources.

The project is set to be completed by 2016, and its positive results are expected to be replicated in other districts and provinces throughout Mozambique. 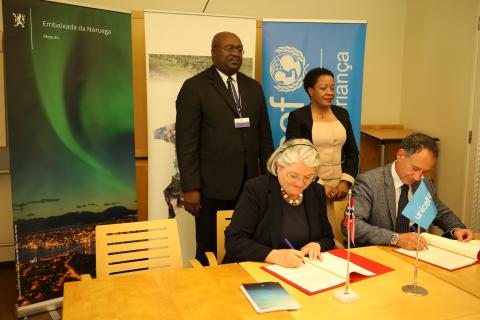