Giving children the best chance to survive and thrive

Child survival has improved substantially in Indonesia over the past two decades, with under-five and infant mortality rates more than halving between 1990 and 2017

More than half of districts are now free of malaria, and 201 million people have been enrolled in what is currently the world’s largest single payer health insurance programme.

There has also been a five-fold increase in pregnant women tested for HIV since 2014, with a doubling in the numbers of pregnant women initiating antiretroviral treatment.

However, nearly 1 in 30 children dies before reaching the age of five, with figures as high as 1 in 10 in some districts of eastern Indonesia – the least developed region of the country.

Because many neonatal deaths are related to care at the time of birth, newborn health goes hand in hand with the health of mothers. Here too, progress has been modest, with maternal mortality dropping from 390 to 305 per 100,000 live births between 1991 and 2015 (Supas 2014). This is despite high coverage of skilled birth attendance (94 per cent) and health facility delivery (83 per cent).

Pneumonia, congenital disease, and diarrhea are the leading killers in early childhood – causing 36, 13 and 10 per cent of all under-five deaths, respectively – as well as neonatal complications, injuries and measles and malaria in endemic areas.

Added to this are the risks children face from air pollution and the effects of nearly 30 million people still practicing open defecation.

UNICEF is working with the Government of Indonesia to improve access to quality health services for mothers, newborns and children, especially the most vulnerable.

Quality of healthcare is being strengthened by building the capacity of local health authorities; adopting standards and indicators to assess the quality of maternal and newborn care at all levels of the health system; and improving patient care and services in health facilities through quality improvement strategies.

To tackle communicable diseases, malaria elimination efforts in endemic areas are being supported, along with improving HIV services for the prevention of mother-to-child HIV transmission and early infant diagnosis.

In the area of non-communicable diseases, UNICEF is supporting advocacy and awareness raising on the devastating effects of air pollution on children’s health and well-being. 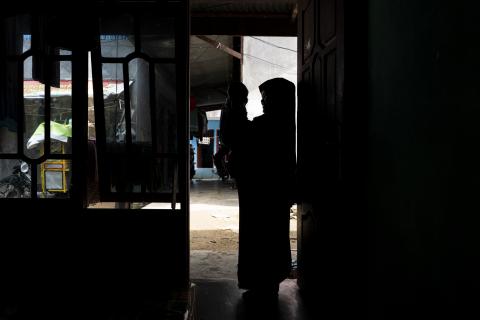