Vaccines have contributed to dramatic reductions in child mortality. Bringing them to scale across countries requires a tailored, strategic approach to align supply availability with demand.

Each year, UNICEF supplies over two billion doses of vaccines, to reach approximately 45 per cent of the world’s children under five years of age. This annual investment, totaling $1.656 billion in 2019, supports routine immunization programmes, preventive campaigns and outbreak response around the world.

Over the past few decades, the vaccine landscape has seen many changes, as new vaccine technologies became available and as countries expanded their national immunization programmes. As of 2019, UNICEF procures 25 different vaccines on behalf of nearly 100 countries.

Each vaccine has its own unique supply and demand complexities, requiring tailored strategic procurement and agile supply management to address any unexpected changes in supply and demand. For all vaccines, close collaboration among governments, global partners and manufacturers is critical to ensure there is a reliable supply of quality, affordable vaccines. UNICEF and global partners, such as GAVI, the Vaccine Alliance, work in close collaboration to address vaccine supply challenges, faced by countries and to calibrate supply and demand.

UNICEF also works directly with governments and other global partners to assess their vaccine requirements through an annual forecasting exercise, which informs procurement and shipment plans to ensure there is sufficient supply of vaccines in-country to meet immunization coverage goals.

The vaccine landscape will continue to shift and evolve as technologies improve, as new manufacturers enter the market and as countries expand their national immunization programmes. UNICEF will continue to work in collaboration with governments and partners to address the supply and demand complexities and to meet the goal of fully immunizing every child.

Case study
IPV: the fastest introduction and scale up of a vaccine ever, but not without challenges

In an effort to accelerate the global eradication of polio and help prevent a resurgence of the disease, WHO recommended in 2013 that all countries introduce at least one dose of inactivated polio vaccine (IPV) into routine immunization schedules by the end of 2015. At the time, 126 countries were using only oral polio vaccine (OPV). By the end of 2015, most of these countries had either introduced IPV into their programmes or had developed plans for its introduction. However, supply availability did not keep pace with the demand. Despite assurances that they would be able to meet the requirements, the two manufacturers awarded the supply contracts were able to produce only about half of the quantities needed due to unforeseen difficulties in scaling up bulk productions.

To address these challenges UNICEF, in collaboration with governments, WHO and other partners, put various measures in place to maximize the limited supply. For example, IPV vials equipped with Vaccine Vial Monitors (VVM) were approved for use for up to 28 days after opening, rather than within six hours, decreasing wastage. Another strategy to maximize the limited supply was to apply a fractional dose schedule. Under normal circumstances, each five-dose vial was used to immunize five children. To maximize the limited supply, it was assessed that one child could be immunized with two separate ‘fractional’ doses, which meant that one vial could immunize 12 children. The IPV shortages continued until 2019, when enough supply became available to meet country demand. By April 2019, all 126 countries had introduced IPV. Thanks to collaboration among vaccine stakeholders to overcome these supply challenges, IPV is considered to be the fastest ever introduction and scale up of a new vaccine. Challenges are expected to continue and the industry will need further scaling up to meet increased demand in 2020.

First licensed in 2000, the pneumococcal conjugate vaccine (PCV) prevents pneumococcal diseases (such as pneumonia or meningitis) – a leading cause of mortality in children. In 2007, WHO issued a recommendation that countries include PCV in their national immunization programmes, however uptake was low due to various factors, including price. To help accelerate PCV introduction in Gavi-eligible countries, an advance market commitment (AMC) was deployed. An AMC is an innovative financing mechanism to encourage manufacturers to scale up vaccine development and produce sufficient supply at affordable prices. By the end of 2019, 60 out of 73 Gavi-supported countries had introduced PCV, increasing the demand to 165 million doses per year. UNICEF estimates that demand could possibly reach up to 258 million doses by 2027. Many MICs are also procuring PCV through UNICEF to gain access to its supply networks, purchasing capacity and logistics expertise. The long-term demand from MICs through UNICEF is expected to increase up to 35 million doses by 2022. As more and more countries introduce PCV, UNICEF tenders for the projected doses to ensure that the supply keeps pace with the demand. The AMC helped introduce PCV in low-income countries just within nine years of its development – considered a very short timeline for vaccine introduction.

First licensed in 2006, human papillomavirus (HPV) vaccines to protect against cervical cancer were recommended by WHO as a part of national immunization programmes in 2009. In 2012, Gavi began support for HPV vaccine demonstration programmes, and further broadened its programme policy in 2016 to increase uptake. The new guidelines allowed countries to implement national introductions rather than starting with a demonstration programme, as well as the option to vaccinate multiple age cohorts of girls between 9 and 14 years. Demand for the vaccine further surged following WHO’s 2018 global call to action to end cervical cancer, and adoption of gender-neutral strategies in some countries. As demand for the HPV vaccine increased, it quickly outpaced the available supply. As of 2019, two manufacturers had WHO prequalification for HPV vaccines, and new WHO prequalified manufacturers are expected to enter the market in 2021. The existing manufacturers are scaling up their production capacity to meet the demand forecast. This scale-up will result in additional doses in 2022. UNICEF is in close contact with manufacturers to secure doses based on demand projections, and with countries to plan their introductions once the supply availability improves. Other innovations to maximize available supply are also being explored, such as a one-dose HPV schedule.

Many self-financing countries are concerned about the high pricing of HPV vaccines, which ranges from 2.5 to 7 times higher than the lowest price offered to Gavi-supported countries. UNICEF is advising these countries to forecast their demand and make longer-term commitments, if possible, which may help manufacturers to offer improved pricing. For example, Turkmenistan made a multi-year commitment for HPV vaccines, which helped UNICEF negotiate an 11 per cent price reduction with the manufacturer. The savings gained from such price reductions can then be reinvested to further strengthen routine immunization programmes. 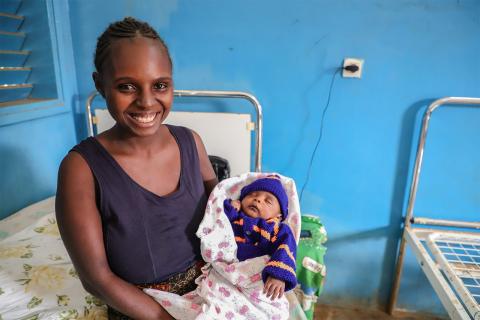 As countries transition away from donor funding to their own domestic sources of financing, a tool known as ‘pre-financing’ is supporting countries to deliv 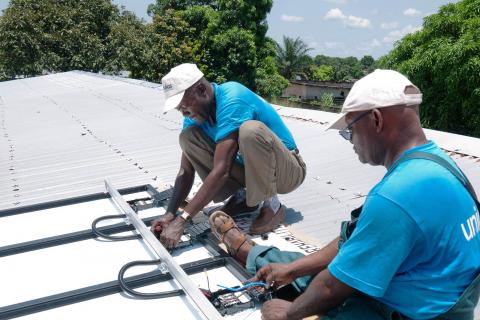 Keeping vaccines safe through the last mile of their journey 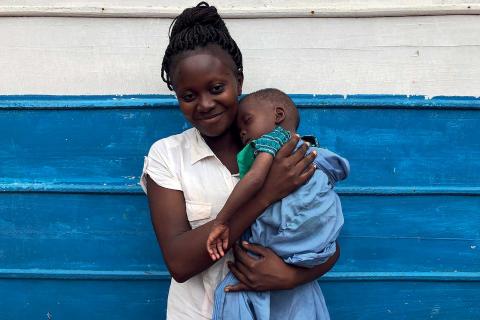 The Supply Chain Maturity Scorecard is a simple tool that can help countries identify gaps and target investments to strengthen supply chains. 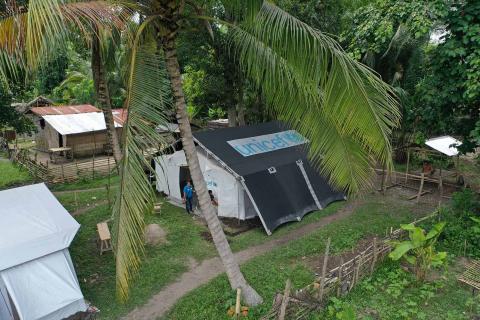 Innovation at the heart of humanitarian response

To develop the new High Performance Tent, UNICEF embarked on a co-creation approach to create the very best product that UNICEF and industry can offer.