Inspiring stories of two fathers doing their best to bring up happy and healthy children.

This photo essay documents two fathers who participated in the MenCare Child Protection Programme which is supported by UNICEF, the National Department of Social Development and Sonke Gender Justice. This important programme aims at promoting the equal involvement of men in caregiving while focusing on equitable, nonviolent parenting practices. UNICEF contributed to the training of 110 social workers across five provinces as well as 26 child and youth care workers in the Eastern Cape.  There is now sufficient evidence to show the success of this behavior-change initiative.

Fathers are heroes: The story of Fahiem and Fawad

Engaged, responsive fatherhood and men’s participation in the lives of children are positive for children, women and men themselves.

“My father was my hero. He spent as much time with us as he could. He had a pickup truck that he sold vegetables out of and was very busy with the mosque. He would pick up the family and we’d go to the pool or the beach. There was never a moment he wasn’t there for me” recalls 37-year-old Fahiem Abrahams about his own childhood.

“Parenting nowadays is a joint-venture between husband and wife,” Fahiem says. “Communication is the key. When I do the dishes, it’s one less thing for her to do." He continues: "It used to be that the father was the bread-winner and the mother was the care-giver. Now it’s a dual role.” He adds that “just being there for your kids” is the most important part of being a dad. "Even if we are just out for the evening, I start to miss them. It just comes naturally.”

Fahiem and Fawad hike up the steep hill to Fawad's school in Woodstock, Cape Town. Fawad, who lives with autism, attends Alpha School for Learners with Autism. “Fawad is the bravest child I know. To have gone through so much — and all with a smile… I want for him to have as close to a normal life as possible,” he says. Autism doesn’t have a face. Because he looks normal, people expect him to be normal, Fahiem adds. “People say, ‘oh, it’s a shame.’ But we don’t want pity for him, we want acceptance.”

Fawad began attending Alpha School for Learners with Autism a few months earlier and since then has made tremendous strides, passing developmental milestones that his parents worried he might never reach.

“For someone who’s non-verbal, he’s very vocal,” says Fahiem. “A year and a half ago he was basically mute. Now anything he says is music to my ears. He sings all the time,” Fahiem says.

Fahiem plays with Fawad and his brother and sister at their home in Bonteheuwel, Cape Town. “Parenting three children has become a joint-venture between husband and wife. My kids are my teachers. They show me the way to be a better person. “One night my daughter asked me why I wasn’t helping Taheera [wife] by doing the dishes. That really drove it home.”

“When I get Fawad from school it’s like he hasn’t seen me in a year. The excitement on his face… If that isn’t love, I don’t know what is.”

Fathers are role models: The story of Dieu-Merci and Grace

Forty-four-year-old Dieu-Merci Matala, holds his infant daughter, Grace (7 months), for a portrait near the Transnet harbor facility where he works in Cape Town, South Africa.

Ten years ago, Dieu-Merci arrived in South Africa, alone, as an asylum seeker fleeing from conflict and insecurity in the Democratic Republic of Congo, where he was born.

"At first, I couldn't speak any English. Those days were so difficult," he recalls, shaking his head at the memory. Dieu-Merci, who holds a law degree and was an assistant prosecuting attorney when he was forced into exile, now works as a fireman.

“The most important thing about being a father is your presence... When you go to work, they need to know that you’ll be back — that daddy isn’t going away for good.”

Dieu-Merci carries daughter Grace, 7 months, while taking his other children, Fortune, 11 (red jacket), David, 7 (orange top), and Joshua, 4 (blue and white top), for ice cream near the family's apartment Dieu-Merci works 12 hours shifts — sometimes during the day, other times overnight — at a ship repair facility located in Cape Town. "Sometimes there are long gaps between contracts, so I spend a lot of time at home with the kids,” he says.

Dieu-Merci drops off Grace at an informal day care near the family's apartment in Maitland, Cape Town.

“The system that we learned from our parents and elders... said that the man was there to provide, and he held power over his wife and family. But that’s changing, (in part) because of education. People now know that we need to make it 50/50," Dieu-Merci says. His wife, Bibiche, an entrepreneur, brings home a large portion of the family’s income. She works at an NGO providing support to fellow refugee families and runs a small business as a beautician and fashion designer out of their home. On days when both Dieu-Merci and Bibiche are working, Grace and her brother, Joshua, attend an informal day care run by a neighbor, while Fortune and David go to school.

In addition to working and cooperatively raising his three children, Dieu-Merci volunteers with Sonke Gender Justice, an NGO partnered with UNICEF. As a participant in Sonke's MenCare program, Dieu-Merci has received extensive training on how to be an involved father and caregiver.

“You have to find a way to educate kids without the use of violence. You have to know that they are human beings and to respect their human rights,” he comments.

Dieu-Merci believes “when you beat a child, the information goes straight out of their head. They don’t remember what you’re trying to teach them. But if you talk to them and their mind is quiet, they’ll understand and learn the lesson.” He continues, “It’s important to be a good role model. The children of today will also be parents. What they learn from watching you, they will apply in their own time — and shape tomorrow’s society.”

Dieu-Merci also feels that the most challenging aspect of fatherhood is taking on responsibilities and “accepting any kind of job that... allows you to provide for your family... Being a father who really wants to be there for his family, you don’t fold your arms and wait for bread to fall from heaven. You have to get up and go look for it.” 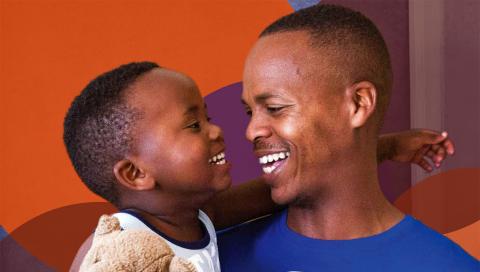 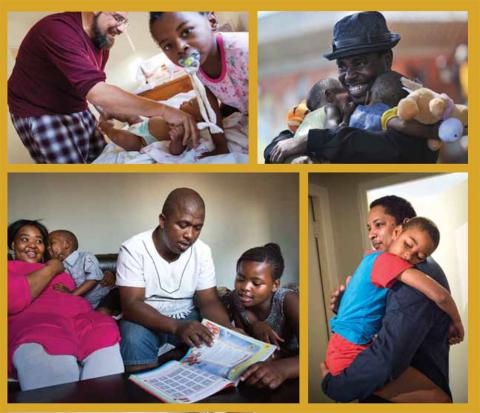 Developed as an advocacy tool to influence policy and law reform and monitor implementation of current policies and laws related to fatherhood.

New partnership to improve the lives of children