The Convention on the Rights of the Child at a crossroads

Thirty years ago, the United Nations General Assembly adopted the Convention on the Rights of the Child at a moment of rapid global change marked by the end of apartheid, the fall of the Berlin Wall and the birth of the World Wide Web. These developments and more brought momentous and lasting evolution, as well as a sense of renewal and hope for future generations. In a reflection of that hopeful spirit, the Convention has since become the most widely ratified human rights treaty in history.

As many of the facts and figures cited in this report indicate, the world has made impressive progress towards realizing a wide range of children’s rights since the Convention on the Rights of the Child was adopted in 1989. We rightly celebrate that achievement on the Convention’s 30th anniversary. But the available data also show that progress has been slowest for children from the poorest households. 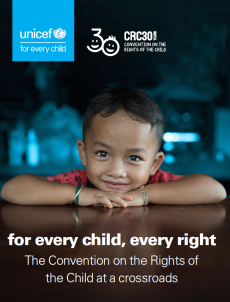 Canadian Minister of Labour and Women meets with UNICEF in Peru