We work to ensure the realization of children's rights to grow up in a family environment, protected from violence, abuse and exploitation

India has a wide range of laws to protect children and child protection is increasingly accepted as a core component of social development. The challenge is in implementing the laws due to inadequate human resource capacity on the ground and quality prevention and rehabilitation services. As a result, millions of children are prone to violence, abuse and exploitation.

Violence takes place in all settings: at home, school, childcare institutions, work and in the community. Often violence is perpetrated by someone known to the child.

India has a fairly comprehensive policy and legal framework addressing rights and protection for children, providing opportunities to ensure that all children have equal access to quality protection services. The core child protection legislation for children is enshrined in four main laws: The Juvenile Justice (Care and Protection) Act (2000, amended in 2015); The Prohibition of Child Marriage Act (2006); The Protection of Children from Sexual Offences Act (2012), and The Child Labour (Prohibition and Regulation) Act (1986, amended in 2016).

Over the past five years, notable efforts have been made to set up fast track courts and deal with cybercrime against children and women.  In 2019, the Protection of Children from Sexual Offences Bill was amended, stipulating stricter punishment for sexual crimes against children.

Violence against children is widespread and remains a harsh reality for millions of children from all socio-economic groups in India. Both girls and boys in India face early marriage, domestic abuse, sexual violence, violence at home and in school, trafficking, online violence, child labour and bullying. All forms of violence, abuse and exploitation have lifelong consequences on children’s lives.

Exact data on violence, abuse and exploitation is not sufficient, but overall the nation is becoming increasingly aware of violence against children, especially sexual abuse. Several cases that may have earlier gone unnoticed, are now being reported.

Violence against children is widespread and remains a harsh reality for millions of children from all socio-economic groups in India. Both girls and boys in India face early marriage, domestic abuse, sexual violence, violence at home and in school, trafficking, online violence, child labour and bullying. All forms of violence, abuse and exploitation have long-lasting consequences on children’s lives.

Exact data on violence, abuse and exploitation is not sufficient but overall India is becoming increasingly aware of violence against children, especially sexual abuse. Several cases that may have earlier gone unnoticed, are now being reported.

Anger and shock at child sexual abuse are not enough. We all need to come together to #ENDviolence against children. 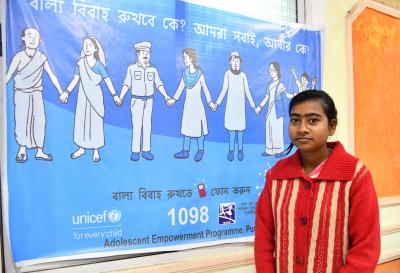 India has articulated its commitment to eliminating child marriage through numerous policies, laws and programmes. The country’s progress in the past decade is one of the strongest among countries in South Asia.

Yet, one in four Indian girls aged 20-24 were found to have been married before 18 years of age, as per the National Family Health Survey (2019-21). The persistence of child marriage remains a potential deterrent to India’s likelihood of achieving Sustainable Development Goal 5 by 2030. 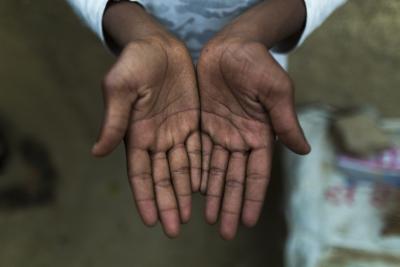 Child labour remains a complex problem in India. Despite proactive legislative measures and policies to combat the problem, the decline in child labour has been less progressive than expected. Children are most often found working in agriculture and households, with girls often being invisible. 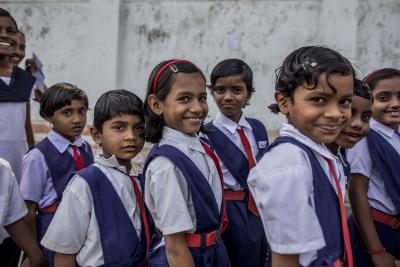 Data on sexual violence is scarce and is mainly based on the reporting of cases, thus implying that the figures underestimate the magnitude of the problem, especially as many cases go unreported.

From the cases that are reported, it can be observed that sexual abusers are mainly male and often individuals known to the child. As per the National Family Health Survey (2019-21), 1.5% of young women in the age group 18-29 reported having experienced sexual violence before the age of 18.

UNICEF strongly believes that all children have the right to grow in a safe and nurturing family environment. Yet, across the world, children continue to be separated or are at a risk of being separated from their families. These children include those living on the streets, transport terminals, and childcare institutions as well as child workers or child victims of human trafficking.

In the absence of viable options, institutional care is the primary response for children in such situations. However, research studies show that children who grow up in institutional care demonstrate long-term adverse outcomes in terms of physical, cognitive, and mental health.

Progress has been made in generating social awareness, enhancing legislation and nurturing action towards ending violence, abuse and exploitation of children, but more needs to be done to ensure survivors and their families benefit from sensitive, timely and efficient protection and services.

UNICEF also focuses on implementation of key child protection legislation and promotion of practices that protect children from violence, abuse and exploitation.

Building on increasing awareness towards child abuse in India, UNICEF can play a major role in enhancing two missing elements of government action: prevention and rehabilitation of survivors of child abuse and exploitation.

Prevention is central to UNICEF programming as it is the most effective way to deal with child sexual abuse and exploitation. Ensuring India’s children are sufficiently protected requires more than the existing investment, which too is focused on post-incident responses.

UNICEF India also works with the government to provide well-established family-based alternative care options for children without parental care. UNICEF focuses on services to prevent separation of children from families and on rehabilitative services for deinstitutionalized children and care leaving youth.

UNICEF takes a broad view of the range of support services that provide healing to victims/survivors and their families including focus on counselling, restorative justice programmes, support for school continuation, employment and social protection. Priority is given to promoting social protection programmes which incentivize the reduction of child labour and child marriage.

A key area of work for UNICEF is to strengthen and advocate for effective delivery of preventive and responsive child protection services in selected states. Working in coordination with the Government of India, 17 state governments, and civil society organizations, UNICEF is creating the building blocks of a child protection system, including financial and human resources, financial institutions, delivery of programmes and monitoring and evaluation.

UNICEF joins hands with government, civil society organizations and other partners in building communities and families where children are safe and free of abuse and exploitation.