UNICEF is fully committed to working with the Government of India to ensure that each child born in this vast and complex country gets the best start in life, thrives and develops to his or her full potential.

We have a dream for every child. A dream of health, safety, and well-being. Looking back at these past 75 years, UNICEF celebrates its partnership with India.

Strong foundations that have nurtured children and their health.

The organisation began its work in India in 1949 with three staff members and established an office in Delhi three years later. Currently, it advocates for the rights of India’s children in 16 states.

1954 -The White Revolution: A beginning
During 1940s, Kaira Union (AMUL), a milk cooperative, faced a problem. Their surplus milk could not be sold.  The livelihood of thousands of milk farmers was in jeopardy. Dr. Verghese Kurien, the legendary “Father of the White Revolution”, convinced UNICEF and others that the surplus buffalo milk could be converted into powder.

1954 -India’s first DDT Plant Established
India’s first DDT plant set up to supply National Malaria Eradication Programme launched by the Government of India. Plant was set up with the equipment provided by UNICEF.

1966- Bihar Drought
In the summer of 1966, Bihar and eastern Uttar Pradesh experienced one of the worst droughts in the history of the region during the 20th century. Around 60 million people were suffering from acute food and water shortages.

At the request of the country’s Prime Minister Indira Gandhi, UNICEF provided drilling rigs to accelerate the government’s efforts to provide safe drinking water. The emergency programme mounted at that time lead, in due course, to a major expansion of the national rural drinking water supply programme in which UNICEF became the key external partner.

1960 - Science teaching
In the early 1960s, the GOI and UNICEF signed an agreement for reorganisation and expansion of science teaching in the schools of India. The emphasis was on teaching through demonstration kits rather than through chalk and talk method. NCERT, UNESCO and UNICEF worked together.

1970 -The Water Revolution
During the 1970s, UNICEF became a key partner with the Government of India in the world’s largest rural water supply programme. UNICEF brought drilling rigs to India which could drill boreholes in hard rock. The Government supplied handpumps. A problem arose. The handpumps, designed for single family use, were not up to the wear and tear of use by a community of 500 or more people. India needed a strong, locally manufactured handpump which could be easily maintained.

This need led to the development of the India Mark II, now the world’s most famous handpump. UNICEF worked with the government’s Mechanical Engineering Research and Development Organisation and Richardson and Cruddas, a government-owned engineering company, to develop the India Mark II, but the story began in Maharashtra where the Sholapur Pump was already in use. This pump was strong and well-engineered; it became the basis for the design of India Mark II.

The India Mark II, and the later India Mark III, are now exported to more than 40 countries around the world.

1983- Guinea Worm Eradication Programme
UNICEF supported India's national programme to rid the country of an agonising disease caused by guinea worms.  This project was instrumental in getting the surgical extraction of guinea worms accepted in India and thereafter globally. In 2000, the World Health Organisation certified that India was guinea worm free.

1991 - Iodine Deficiency Disorder
Since the 1990s, the Government of India, UNICEF, other UN agencies and NGOs have been working together for the promotion of Iodised salt as the best way of preventing Iodine Deficiencies Disorders. Today in India, more than 14 million out of the 26 million newborns are protected against brain damage due to iodine deficiency.

1999 -Super Cylone of Orissa
'Super Cyclone' hit the Orissa coast killing about 10,000 people. The State Government was supported by various agencies including UNICEF which coordinated relief operations for about 1.7 million children.

2001 -Dular Project
The Dular project, to combat malnutrition, infant mortality and poor maternal health, started in selected districts of Bihar and Jharkhand by the Government with UNICEF support.

2001 - Gujarat Earthquake
Nearly 3 million children were directly affected by the Gujarat earthquake.  12,000 schools were damaged or destroyed. UNICEF supported the efforts to revitalise the education system with modern learning tools and methodologies.

2004 - Tsunami relief
The Tsunami killed more than 12,400 in India. A large percentage werewomen and children.  UNICEF worked to raise the standard of child-centred services to levels higher than they were before the disaster.

2005- Joyful Learning
Since 1991, joyful learning has emerged as a powerful concept to change the way schools and classrooms are managed. Whether it is in Nalli Kalli of Karnataka, the Quality Education Schools in UP or elsewhere - UNICEF has supported joyful learning.

2011 - Census support
Gender issues were mainstreamed into the training and communication strategy for the 2011 Census. This helped 2.7 million enumerators and supervisors collect quality disaggregated data as part of the UNICEF contribution to the joint United Nations support to the Census.

2012–Polio Campaign
Polio cases in India fell from 559 in 2008 to cero cases in 2012. The Government, in partnership with UNICEF, the World Health Organization (WHO), the Bill & Melinda Gates Foundation, Rotary International and the Centers for Disease Control and Prevention contributed to almost universal awareness of the need to vaccinate all children under five against polio. As a result of these efforts, India was removed from the list of endemic countries in 2014.

2013- Reduction in MMR
UNICEF’sSupport to the National Health Mission (NRHM) and the second phase of the Reproductive and Child Health programme resulted in increased access to institutional and community-based maternal, neonatal and child health services. This contributed to a reduction in the Maternal Mortality Rate (MMR)from 254 in 2004-06 to 167 in 2011-13, and the Infant Mortality Rate(IMR)from 66 in 2001 to 40 in 2013.In February 2013, India launched its Call to Action to reduce the under-five mortality. The CTA has brought together state governments, development partners, such as UNICEF, NGOs, the corporate sector and other key stakeholders under the umbrella to ensure harmony in efforts to accelerate inroads in child survival.

2013 -Communication Campaign on Maternal and Child Nutrition
The Ministry of Women and Child Development (MWCD) successfully launched a nationwide Communication Campaign on Maternal and Child Nutritionin November 2012, jointly with Mr. Aamir Khan, the renowned actor and UNICEF Ambassador promoting nutrition for children. This was one of the largest public service campaigns in the country, reaching people across India, through diverse means of communication in 18 languages

2014 – India Newborn Action Plan launched
This Action Plan, the first of this kind in the region, builds upon the existing commitments for newborn under Call to Action, the RMNCH+A (Reproductive, Maternal, Newborn, Child Health + Adolescent) Strategic Framework and the National Health Mission, and is part of a series of initiatives taken by MOH to reduce child deaths giving simultaneous focus on pneumonia and diarrhoea. It aims at achieving a single digit neonatal mortality and still birth rate by 2030.

Just a few years ago, in 2015, nearly half of India’s population of around 568 million people and accounted for 90 per cent of the people in South Asia and half of the 1.2 billion people in the world that defecated in the open.

India launched a massive sanitation programme, Swachh Bharat (clean India) Mission, which between 2015 and 2019, provided 105 million Household toilets, providing access to about 525 million people. A tremendous achievement, only possible because of the Mission led by the Prime Minister and implemented through massive partnerships of all and a vibrant nationwide Jan Andolan.

UNICEF has been a proud partner of the Swachh Bharat Mission. 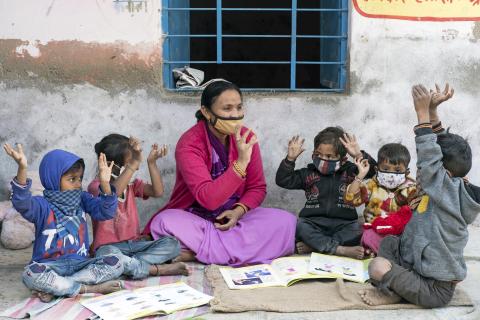 We are dedicated to advancing the rights of all girls and boys in India, especially the most disadvantaged. 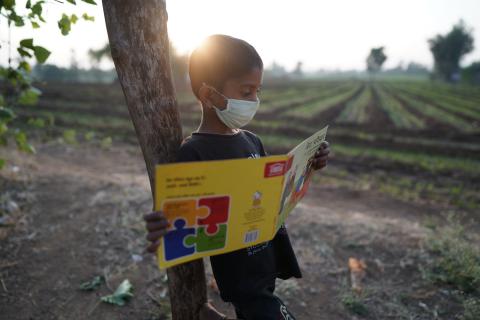 Read the latest news and stories of children and their families from across the country. 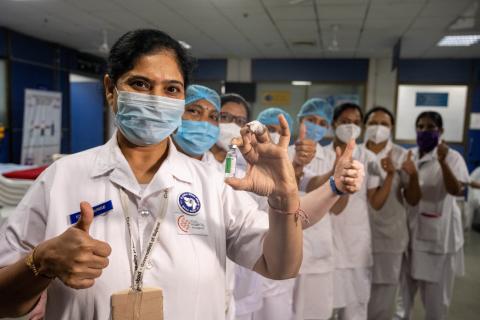 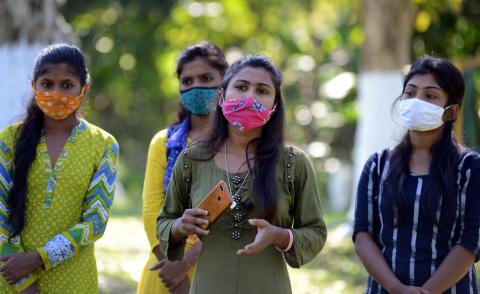 For more than 70 years, UNICEF has led the global fight for children’s rights. Join us to have a real impact on the lives of the world’s children.