Snezana’s story: From being bullied to ending conflicts at school

MITROVICA, Kosovo (SCR 1244), 6 September, 2018 - Sixteen-year-old Snezana Dzogovic vividly remembers when her classmates started to bully her. She was in sixth grade at her school in Mitrovica, northern Kosovo (SCR 1244).

“I went ‘into’ myself and did not talk to anyone about it.  I started avoiding school.  My grades fell because I did not go to school. I could not study at home,” she says.

Snezana says the bullying started when she began listening to rock music and dressing differently than the other girls. She liked bands like Nirvana and Guns n’ Roses and she cut her hair short.

Verbal and physical abuse followed. Her classmates would damage her belongings when she wasn’t looking.

One day Snezana came home with her backpack and books ripped and her mother asked her what had happened.

“When I started to talk, my mother felt shocked and embarrassed that I had not shared it before. My mother went to school and spoke to the class teacher, but she (the teacher) avoided resolving the issue,” says Snezana.

Violence, an everyday lesson for millions

According to a new report released by UNICEF today, Violence in Schools: An Everyday Lesson, peer violence, defined as the number of children who report having been bullied in the last month or having been involved in a physical fight in the last year – is a pervasive part of young people’s education around the world.

The report finds that approximately half of all students aged 13 to 15 – 150 million girls and boys – experience peer-violence. This violence exists in every region of the world and in every community.

The report explains that the effects of peer to peer violence are unacceptably high on individual young people as well as society as a whole. Violence decreases self-esteem, reduces attendance, lowers grades and leads many children to drop out of school completely.

From being bullied to mediating conflicts

Snezana explains that during the time she was being bullied, a new group of peer mediators were brought into her school. She had never heard about the group and was admittedly skeptical.

“At first I did not feel comfortable.  I thought it was yet another group that would bully me,” she said.

But this group was different.

The group is organized by UNICEF and partner organization in Kosovo (SCR 1244) DOMOVIK as part of a school-based violence prevention programme. The peer mediators are student volunteers who are trained to resolve conflict at school – often cases of bullying and psychological abuse. They are also trained to refer more serious cases of violence to appropriate officials, including social welfare authorities and the police.

The peer mediators work with school administrators, teachers, the student council as well as psychologists and education specialists.

Snezana decided to join the group. During the first year of being a peer mediator the bullying she was experiencing stopped. She also brought positive changes into other student’s lives.

“When I joined, I found it to be a wonderful group and started to work on myself,” she says.  “I now put in extra effort when I see a child being bullied, and also suggest the child to join the peer mediation team.”

UNICEF/UN0220914/Babajanyan VII Photo
Snezana (on the left, in a yellow shirt) and her fellow peer mediators meet at the Peer Mediation Center of Domovik NGO, in Mitrovica North Kosovo (SCR 1244). UNICEF estimates approximately half of all students aged 13 to 15 globally – 150 million girls and boys – experience peer-violence. The peer mediators are student volunteers who are trained to resolve conflict at school – often cases of bullying and psychological abuse.

UNICEF/UN0220915/Babajanyan VII Photo
Peer mediator Snezana, 16 years old, speaks to a representative of the UNICEF supported Domovik NGO, in a park in Mitrovica North, Kosovo (SCR 1244). When Snezana was younger she experienced bullying. She is now a peer mediator, volunteering with other students to end bullying and other cases of violence at school.

Over the last five years Snezana has helped end approximately 50 school-based conflicts or cases of bullying. She recalls one particular instance when she convinced two boys who had been fighting that physical conflict would not help.  She explains that she approached the situation as a friend, wanting to listen to both of the boys.

“That is how it was resolved,” she says.

Another important part of Snezana and the other peer mediator’s work is visiting neighbouring schools and re-enacting cases of bullying. During the reenactments, students learn how to identify bullying and resolve conflict.

So far, the peer mediation programme has benefitted at least 15,000 students in Kosovo (SCR 1244).

Snezana will never forget the pain of being targeted by bullies, but she says she has moved on.

“I decided to let them know that I was equal to them,” she says about the kids who used to bully her.  “At the end of the day I forgive them because they were children.” 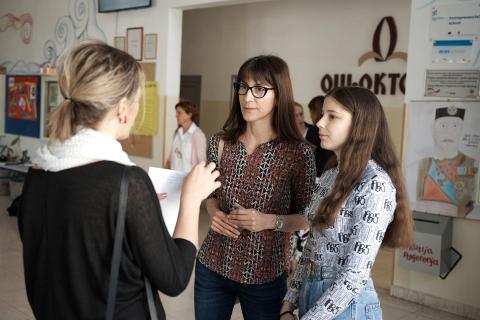 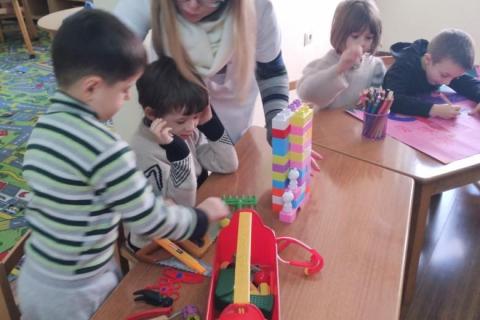 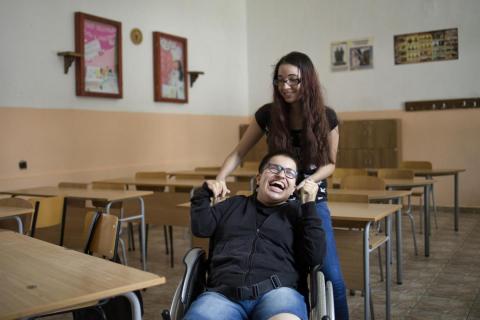 The right to be seen and heard

A youth advocate explains why the world needs more people with disabilities at the decision-making table. 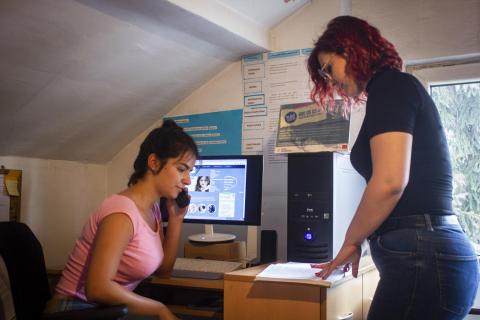 Online and telephone counselling for children and families