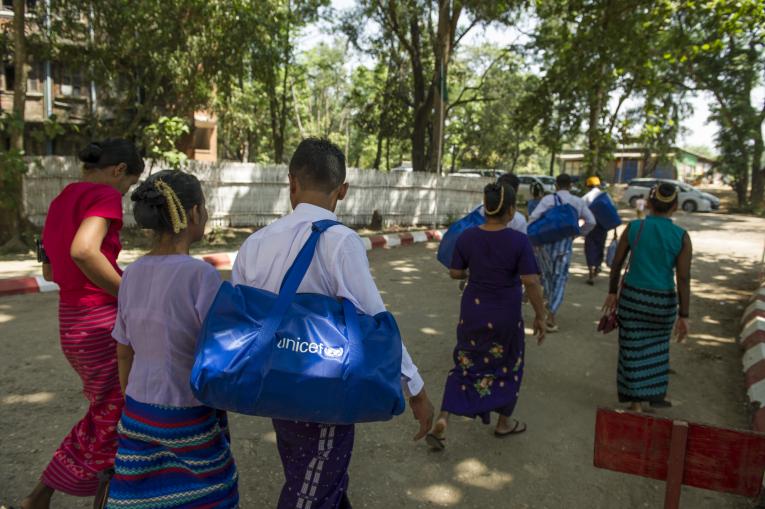 UNICEF Myanmar/2019/Kaung Htet
Discharged child soldiers leave together with their family after the Ceremony on the Handover of Discharged Minor to Parents or Guardians at No1 Military Transit Center in Yangon on March 31, 2019

Yangon, 31 March 2019 – Today, the Government of Myanmar released seven children and 25 young people who were recruited under the age of 18 by the Armed Forces (also known as ‘Tatmadaw’). This is the first discharge to take place in 2019 and underlines the importance of protecting children in the context of armed conflict and within the peace process.

Since June 2012, when the Myanmar government signed a Joint Action Plan with the United Nations to prevent recruitment and use of children in the Tatmadaw, 956 children and young people have been released by the army. The co-chairs of the UN Country Task Force on Monitoring and Reporting (CTFMR) on Grave Violations against Children, Knut Ostby, the Acting United Nations Resident and Humanitarian Coordinator and June Kunugi, UNICEF Representative, welcome this latest discharge as ‘another encouraging step by the Government towards ending and preventing the recruitment and use of children within the Tatmadaw’.

The children and young people discharged will benefit from reintegration programmes to help them get back into civilian life, seize new opportunities for their own development and contribute to bringing lasting peace in Myanmar as productive citizens of their country.

The CTFMR commends the Government for the progress made towards completion of the Joint Action Plan, including through the centralization of the recruitment process, the establishment of more robust age assessment procedures, and the issuance of military directives prohibiting child recruitment and setting standards for military personnel conduct. Efforts have also been made to disseminate these standards to all military personnel and disciplinary measures are taken against those violating these directives.

The CTFMR continues to work with the Government to systematically end and prevent the recruitment and use of children in the Armed Forces in a sustainable manner. Remaining measures include strengthening the legal framework through the expected upcoming adoption of the Child Rights Law and the ratification of the Optional Protocol to the Convention on the Rights of Child on the involvement of children in armed conflict (which the Government signed in 2015), further reinforcing prevention mechanisms to avoid any new cases of underage recruitment, and systematically releasing suspected minors when they have no or inconsistent documentation to verify their age, in line with the principle of the “benefit of the doubt”.

In December 2018, the Government invited the Office of the Special Representative of the Secretary General on Children and Armed Conflict (SRSG CAAC) to facilitate training for Tatmadaw personnel and Government officials from relevant ministries on the six grave violations of children’s rights, with support from the CTFMR. Additional training on this topic is expected to take place in 2019. Another recent positive development was the establishment by Presidential Order in January 2019 of the inter-ministerial Committee for Preventing Grave Violations against Children in Armed Conflict.

The CTFMR looks forward to engaging with the newly established committee to start developing, signing and implementing joint action plans to prevent and respond to the two additional violations that Tatmadaw was listed for in the Secretary General’s 2017 Annual Report on Children and Armed Conflict, namely “killing and maiming” and “rape and other forms of sexual violence”.

The CTFMR remains committed to working closely with the Government in its efforts towards completion of the Joint Action Plan to sustainably end and prevent further recruitment and use of children by the Tatmadaw.

In addition to the Tatmadaw, there are seven non-state armed groups listed by the UN Secretary-General as being ‘persistent perpetrators’ in the recruitment and use of children in Myanmar. They are the:

The CTFMR is also mandated to provide a coordinated response to such grave violations. The CTFMR was established in Myanmar in 2007 and is co-Chaired by the UN Resident Coordinator and the UNICEF Representative in Yangon. The CTFMR in Myanmar includes relevant UN agencies (ILO, UNFPA, UNHCR, UNICEF, UN OCHA, the UN RCO and WFP), Save the Children and World Vision.

In November 2013, UNICEF supported the Myanmar Government to launch a nation-wide campaign to raise awareness of its population on its commitment to end recruitment and use of children by Tatmadaw.  As part of this campaign, and on behalf of CTFMR, UNICEF and World Vision are managing a hotline with two phone numbers (09-421166701 and 09-421166702) where anyone can alert and report suspected cases of children being recruited or used by the Tatmadaw. The hotline is operational 24 hours per day, seven days per week. 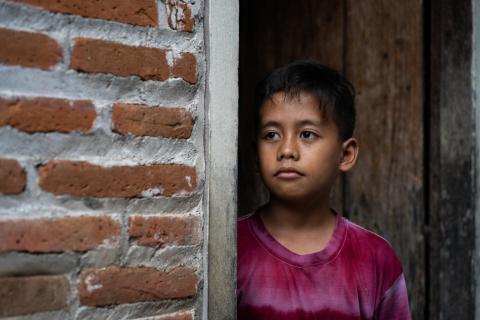