Violence Against Children in Zambia - Study

The 2014 Zambia Violence against Children Survey (VACS) is the first national survey of violence against children. It is a cross-sectional household survey of 13–24-year-olds, designed to produce national-level estimates of experiences of physical, sexual, and emotional violence in childhood.

The survey was designed to include a household questionnaire to be administered to an adult respondent to determine current socioeconomic dynamics of the household and a second, relatively longer questionnaire, for selected primary respondents aged 13–24 years. Results show that violence against children is a problem and is rife in Zambia. The co-occurrence of violence overall and of different types of violence is prominent. Half of females and males experienced at least one type of violence in their childhood.

Female respondents aged 18–24 years were more likely to report experiencing sexual abuse than males in the same age group. Females were also more likely to experience physically forced sex in childhood compared to males. One in three females and two in five males aged 18–24 years experienced physical violence prior to age 18. A quarter of male and female respondents aged 13–17 years experienced physical violence 12 months prior to the survey. Findings from the survey show that one in five females and one in six males aged 18–24, experienced emotional violence.

The most frequent perpetrators of the first incident of sexual abuse prior to age 18 for females and males were spouses, boyfriends/girlfriends, romantic partners and friends. Parents, adult caregivers or other adult relatives were the most frequent perpetrators of physical violence prior to age 18. Sexually active males (aged 19–24) were more likely to have had multiple sexual partners and infrequent condom use in the 12 months preceding the survey, compared to females in the same age group. Nine in ten respondents aged 18–24 who reported having had sexual intercourse knew where to get an HIV test.

Results in this study show that there is a great need to have well-coordinated response strategies, programmes and policies by both Government and all stakeholders to address abuse and violence against children. 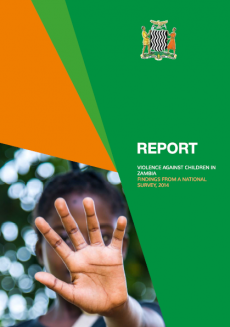