In Zambia, UNICEF defends the rights of children, focusing on the poorest and most disadvantaged.

Overview of the situation for children

Zambia is a country of young people, with the majority of the population under the age of 18 (53.4 per cent). The estimated median age is 16.7 years (2015), which is one of the lowest in the region and globally.

Gender inequality, household poverty and the expansion of peri-urban populations are some of the systematic challenges to realizing the rights of children. The situation is further compounded by high population growth, with a fertility rate of 4.7 children per woman leading to an annual population growth rate of 3.2 per cent

About 59.4 per cent of children live in poor households with 45.4 per cent living in extreme poverty.

Even though Zambia was reclassified as a middle-income country in 2013, the Living Conditions Monitoring Survey Report (2015) revealed that the proportion of households living below the poverty line had decreased only marginally since 2010. The shift to middle-income status has also led to a downsizing of development programmes, threatening interventions targeted at the most vulnerable women and children. While poverty rates have been declining, albeit slowly, data suggest that there are more children living in poverty today, than in 2013. Income inequality is increasing and largely impacts rural households, which have larger numbers of children per family.

Over the last decade, Zambia has made progress on child HEALTH and NUTRITION, including the reduction in maternal and child mortality rates. Between 2014 and 2018:

HIV prevalence has decreased from 13.3 per cent in 2014 to 11.1 per cent in 2018. A high proportion (over 90 per cent) of pregnant women are receiving HIV testing and counselling. The prevalence of stunting among children under five remains high at 35 per cent, and is higher in rural (36 per cent) as compared to urban areas (32 per cent).

A child after just being released from the malnutrition unit at the Chipata Clinic in Lusaka. Zambia has high levels of childhood undernutrition. 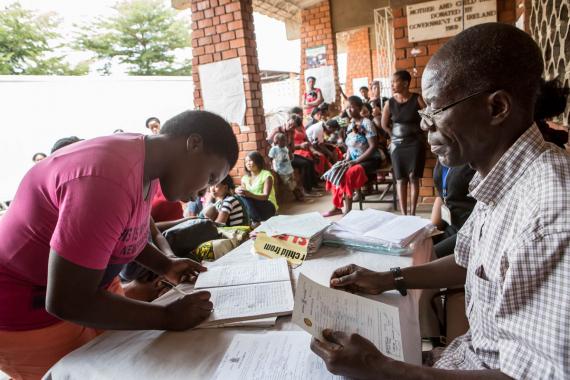 Overall, fewer than 15 per cent of births are registered in Zambia — with poor and rural children having the lowest likelihood of being registered.

Zambia has made significant progress in the EDUCATION sector since 2000. Enrolment in primary education reached 3.3 million in 2017, up from 1.6 million in 2000. Girls are now enrolling in primary school in the same numbers as boys. But there are an estimated 800,000 school-aged children that are out of school. Access to early childhood education is low with only 26 per cent of children entering Grade 1 with any such experience.

Approximately 1 in 3 females and 2 in 5 males between 18-24 years experienced physical VIOLENCE prior to the age of 18, and 20 per cent of males and 16 per cent of females reported experiencing emotional violence.

With 29 per cent of women aged 20-24 married before the age of 18, Zambia has one of the highest rates of CHILD MARRIAGE in Africa. In 2014, the Government commissioned a study through UNICEF on the dynamics leading to child marriage. The findings indicate that child marriage in Zambia is often a union of peers and a reflection of deep social and economic inequalities.