A pregnant mother’s rush for her life

I am standing between deep cracks on the floor inside an empty, rickety room with broken windows and walls riddled with bullet holes. This is 2019, at the Malakal Teaching Hospital in South Sudan’s Upper Nile State, one of the areas most affected by the violent conflict that started in 2013 and subsided after a September 2018 peace agreement.

Two years on, I am again at the same spot, this time standing on a tiled floor, inside painted walls, and between hospital beds in a well-ventilated maternity ward. Nothing clearly demonstrates this recovery of the hospital more than the grin on Nyakong Athou’s face after a successful cesarean operation. Nyakong and her six-day-old son are both safe and healthy, according to their doctor.

Nyakong narrates her story with a crack in her voice. In her ninth month of pregnancy, she’s expecting a safe delivery with the help of a birth attendant at the nearby health facility in her remote village of Diel, some kilometers south of Malakal town. Suddenly, she suffers bleeding through the birth canal before the onset of labor. Nyakong visits the health center in Diel, but a few days later, she is bleeding again.

“I was in serious pain. I was advised to seek better medical attention in Malakal,” she says. In Malakal Teaching Hospital, she is diagnosed with placenta previa, a medical condition in which the placenta blocks the birth canal, making it difficult for the baby to be born normally, as bleeding continues. 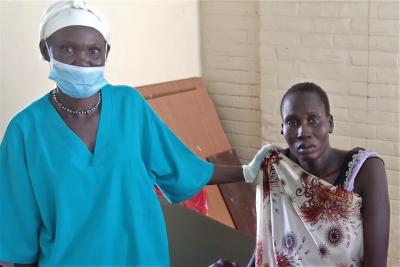 The doctor recommends an operation, which Nyakong first rejects over fears of safety and then accepts in response to the counseling of her traditional birth attendant, Khera Hussein. “I explained to her what her situation means, and she chose the operation,” Khera says. Due to the bleeding, Nyakong becomes anemic and is subjected to blood transfusion, which has helped stabilize her condition. As she tells her story, she clutches her son and smiles.

“This hospital, the doctor and the birth attendant have saved our lives,” she says, with a grin on her face. Her sister, Sarah Thou, indicates she has been worried, too. “She would have died because she bled a lot,” Sarah says.

As our chat shifts to good childcare practices, including routine immunization and exclusive breastfeeding, my reflection goes back to 2019, when this hospital was resuming operations. What are now wards were empty, abandoned rooms in a compound littered with dirt. The medical director of the hospital, Dr. James Wien, captures that situation succinctly.

“All were empty, no materials inside, no equipment, no doors and windows. It was not looking like a hospital,” he says. “It was looking dark inside because of the smoke of gunfire; roofs were torn by bullets. It was home to animals.” Dr. Wien testifies of the changes that have been made over the past two years.

“Now we are administering patients and operating on patients. There is water and electricity. We came here when there was nothing. I am feeling good something has been done,” he says. Without the services of a referral hospital, like emergency operations, Dr. Wien says mothers like Nyakong won’t have any other lifesaving remedies. 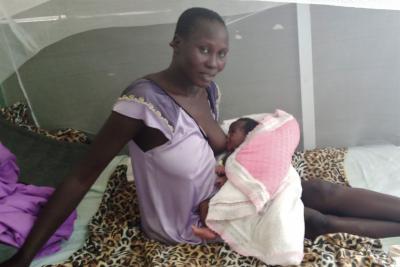 UNICEFSouthSudan/Mach
Nyakong Thou Gai with her newborn son after a successful caesarean operation in Malakal Town.

“This hospital is the only hope for them,” Dr. Wien says. “This is the only referral hospital in the state,” says Dr. Emmanuel Benjamin, health officer with UNICEF, which has been supporting the hospital in a partnership with the World Bank. “It is  critical in saving lives of mothers and children in emergencies.”

The hospital administration has, however, set priorities for maintaining the gains and improving services in support of mothers and children. These include more equipment such as ultrasounds and x-rays, health workers, and renovation of other dilapidated structures that include a 30-bed theatre that’s currently not in operation. “People are returning back, and the need will arise for the big theatre,” Dr. Wieu says.

So far, both Nyakong and Dr. Wieu appreciate the current gains in health service delivery. “This hospital is saving lives,” Nyakong says.

Health activities in Upper Nile State are developed in partnership with the World Bank and funding from the German Committee for UNICEF. 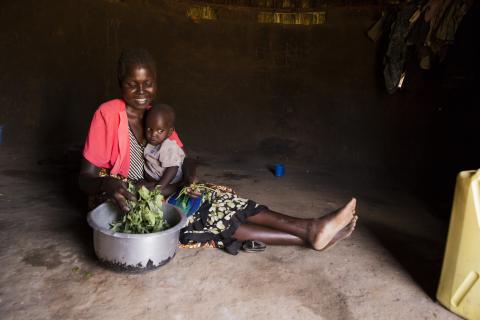 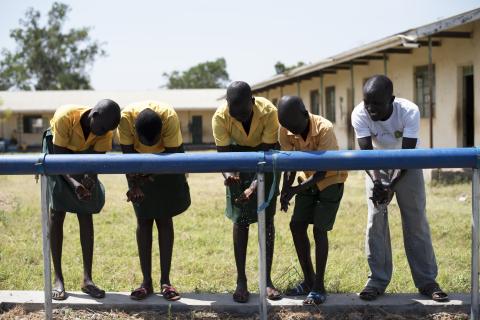 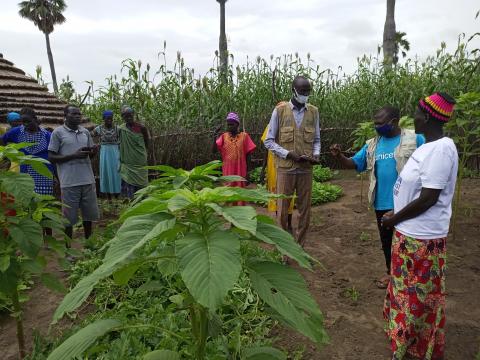 Women championing the fight against malnutrition 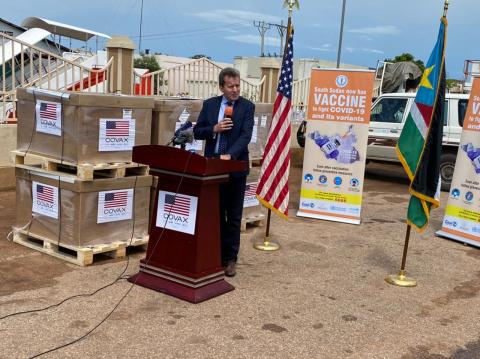