Bringing hope to the most vulnerable

Malnutrition rates remain high among children in the most food insecure areas of Mali. But ready-to-use therapeutic food is saving lives

“The harvests aren’t good,” says Assitan Diakité, 25. “It’s almost like there is a bad spell on the grains.”

Cradled in her arm is her youngest child, 19-month-old Djeneba. Assitan has already had eight pregnancies, but not all her children have survived. And now little Djeneba, her hair sparse and grayish, her skin sagging, was also visibly sick.

“It’s almost like there is a bad spell on the grains.”

“She couldn’t even sit down, she was so weak,” remembers her neighbor, Mariamou Bouaré. Mariamou was the one who realized little Djeneba suffered from severe acute malnutrition, a potentially life-threatening condition. As head of the recently created Nutrition Support Group in the village of Samabougou, she was going door to door in the village screening children under five with an upper arm circumference measuring tape when she arrived at Assitan’s home.

When the measuring tape showed red, she realized just how bad Djeneba’s state was. “When I saw her, I already knew she was sick,” Mariamou says. “But I didn’t know it was so bad.”

“I already knew she was sick. But I didn’t know it was so bad.”

Mariamou referred Assitan to the community healthcare worker, who confirmed the diagnosis and told Assitan to head to the health center. With Djeneba on her back, she set out for the 7km walk down the sandy paths that lead away from her village, walking almost two hours to get to the Boussin Community Health Center.

But when she arrived, it was well worth it: Djeneba was put on a course of Ready-to-Use Therapeutic Food (RUTF), an energy dense paste made with peanuts, oil, sugar, milk, vitamins and minerals. The two sachets a day she is now taking will help her quickly attain her target weight of 7.6kg, compared to her initial weight of 6kg.

Assitan herself only weighs 41kg, her gaunt figure barely visible under traditional blue fabric. On most days, the family only eats twice a day, and there is hardly ever any fish, vegetables or fruit. With her husband often away, Assitan has to take care of all of her children by herself. Her income comes from pounding millet for a neighbor, for which she is paid anywhere between 0.25 and 0.50 USD per day. With little income and bad harvests, feeding her family has become a daily challenge. “I have problems getting enough to eat, and so it’s hard for me to feed my own children well,” she explains.

Unsurprisingly, Djeneba is not the first of her children to suffer from acute malnutrition: four of her children have already suffered from the condition. Children who suffer from severe acute malnutrition often have very low weight for their height and are nine times more likely to die in case of disease due to a weakened immune system. But with effective treatment, children can completely recover. UNICEF is the principal supplier of RUTF in Mali, thanks to support of partners such as DFID, which in 2019 supported the treatment of more than 60,000 children affected by SAM in Mali.

But while in health centers children are being treated, at community level, the concept of malnutrition is often new, including in Samabougou. Thanks to a three-day training conducted by UNICEF partner NGO Coopi, Mariamou learned not only how to screen and refer children with malnutrition, but also the best practices for preventing it: exclusive breastfeeding for the first six months, nutritious complementary foods like enriched porridge up until 2 years, and hygiene in the household, particularly handwashing with soap.

Mariamou remembers the first child she screened who was malnourished. “There was one child called Fousseni. We were all worried because he was in the red. But we referred him to the health center and he recovered completely. That’s when I knew I was doing good work.”

Community-based mechanisms like nutrition support groups help ensure children suffering from SAM are detected as early as possible at community level. But they also play a critical role in preventing new cases by promoting good nutritional practices within isolated communities. Thanks to the support of DFID, 153 nutrition support groups have already been set up in Segou and Baraoueli.

Mariamou’s group has only been active for two months, but the nearby health center is already seeing the impact.

“Setting up the group has really helped in referrals,” says Issa Diallo, head of the Boussin health center. “They also support the community health workers in their work, and they give nutrition information at community level.”

Back in the village, a session is being led on complementary feeding, and Assitan watches attentively as members of the group demonstrate how to prepare enriched porridge using millet flour, peanut powder and the juice of boiled dah leaves, which contains vitamin C. The recipe is new to her and most mothers in the village, who used to prepare porridge which was thinner and contained little protein and vitamins.

Now that there is the nutrition support group in the village, Assitan plans on going to all the sessions.

“I’m so happy Mariamou came to my house and detected my child’s malnutrition. And I’m very grateful that the products at the health center are free. It will really help my child recover.”

Her wish for Djeneba? For her to be in perfect health and later attend school. “All mothers want their children to be educated, after all,” she smiles. 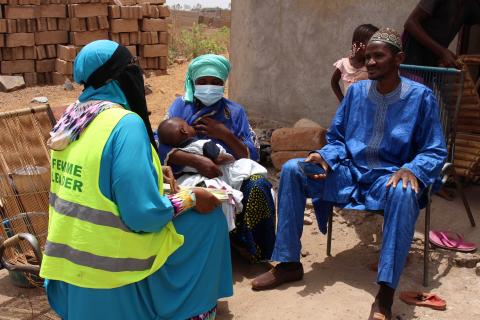 In Bamako, Roukia and other members of the association of women leaders meet with families to promote routine immunization. 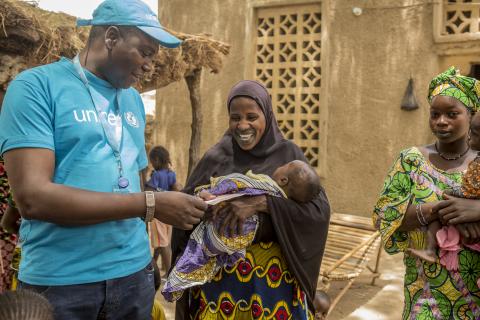 Let's build a world where #LongLifeForAll is a reality! 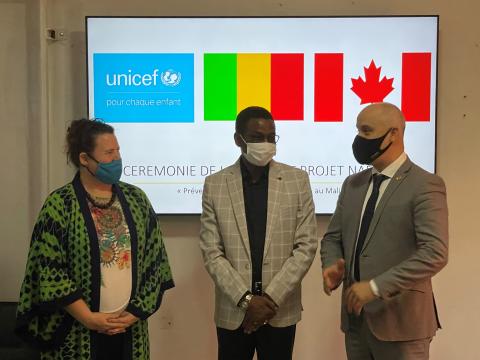 JOINT PRESS RELEASE: Canada pledges one of the largest ever single contributions to a UNICEF Office, to fight malnutrition in Mali 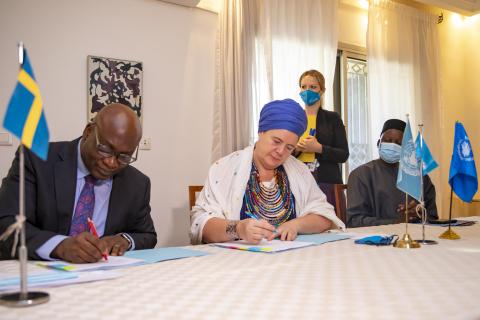