“One day, I want to become a medical doctor,” says 17-year-old Nimatu, from Margibi county, in Liberia.

Three years ago, it seemed almost impossible for her to achieve that dream. Dropping out of school owing to a lack of funds, Nimatu was selling oranges to help support her family. Today, thanks to a UNICEF supported project, she is in Grade 9 after scoring an average 93 per cent in her last school examination, at the top of her grade.  Her mathematics score was 90 per cent.

Nimatu was born in West Point, Liberia’s largest slum, to a family living below the poverty line. Her father, a petty trader, could only afford to send Nimatu and a younger brother to a religious school, where she studied up to grade six. She had to drop out due to a lack of funds.

“I was so sad that I was not able to go to school. I cried most times when I saw my friends and neighbours getting ready for school,” she reminisces.

For two years, Nimatu sold oranges in the street, while three older sisters married at ages 24, 19 and 17.

“One day some girls were in my community, talking about how it is good for girls to go to school and learn. When I said I wanted to join school, they paid all my school fees, gave me a uniform and shoes, and bought me copybooks.”

The girls were part of a Girls Club set up as part of the Ministry of Education led and UNICEF supported Gender Equitable Education Programme (GEEP). The GEEP programme seeks to promote access to education and increase the retention and completion rates of adolescent girls in grades seven through nine. Nimatu is one of some 5,000 girls who have benefitted from the programme.

The GEEP programme offers a two-hour academic tutorial four days a week, providing extra support to students who are at risk of dropping out due to limited family support, or low learning performance in the four core subjects of mathematics, science, social studies and language arts.  In addition, the GEEP programme also provides life and leadership skills for girls through an all-girls club established at each school in which it is implemented.

Profits from small-scale income generation activities by the Girls Clubs go toward the purchase of learning material or paying school fees and supporting girls’ return to school.

There are an estimated 140,160 school-aged girls like Nimatu who remain out of school in Liberia, and an additional 174,380 who are over-aged and at risk of dropping out, according to the Out of School Survey in 2016.

Appointed Chair of the Girls Club two years after she re-joined school, Nimantu also went out into communities to encourage girls to join or return to school.

“Twenty-six girls registered in our school because they heard my story. I am encouraging them to tell their story too, so other girls in the streets can come to school,” says Nimatu. 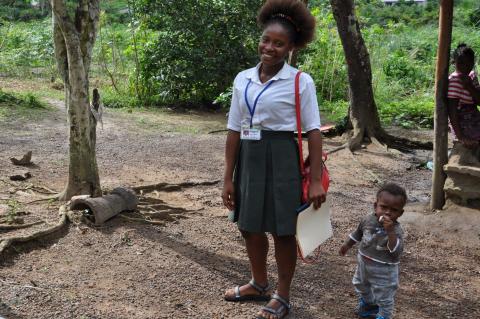 The girl who never gives up

Over 5,000 girls have improved access to education in Liberia with support from UNICEF