The Challenges of Home Learning during the COVID-19 Pandemic

After their schools closed due to the pandemic, Moreyna and Joaquin are striving to study effectively from home.

At 7 A.M. one morning, Moreyna woke up with renewed enthusiasm. As she did every school day prior to the COVID-19 pandemic, she showered, had her breakfast, and put on her school uniform. She then asked her mother to take her to school in the hope that “everything had gone back to normal.”

But she learned soon enough that her school was still closed. She became morose.

“I don’t like it because I can’t see my friends and teachers,” she moaned.

It was then that Moreyna’s mother, Maria Morin, realized that her daughter needed all the help she could get. “I decided to help her study more often,” she said. “It was the only way to make this new reality more bearable for my daughter.”

The pandemic’s profound impact on education

Since the outbreak of COVID-19, Moreyna’s school was closed by the local government. Moreyna was one of the 62.5 million students across the country—from pre-primary to higher education—who had had no choice but to learn from home.

This unprecedented shift to home learning has had a profound impact on students, parents and teachers across Indonesia. It has also exposed the vast geographic and socio-economic inequalities across the nation, with students from poor backgrounds and students with disabilities most impacted.

UNICEF’s support for the government

Since the start of the pandemic, the Government of Indonesia has taken some timely steps to support learning from home. Among them was adapting e-learning applications of both the Ministry of Education and Culture* (MoE) and the Ministry of Religious Affairs and training teachers to use online learning platforms.

However, the biggest obstacle for students learning from home, especially those who are poor and live in remote areas, is lack of internet access and electronic devices. According to UNICEF Education Specialist Nugroho Warman, “Parents also have to focus on other obligations to support their family, which leaves them with less time to support their children.”

In response, the MoE launched an educational TV programme called Belajar dari Rumah (Learning from Home) aimed at children without access internet but with access to TV.** The programme, which covers pre-school and high school, runs from Monday to Friday and is broadcasted through the State Television Network TVRI. It also includes additional programmes for parents.

To help assess the effectiveness of Belajar dari Rumah, UNICEF has been conducting regular surveys among parents, teachers and children. The surveys are conducted through SMS to be able to reach areas with no internet access.

UNICEF is also assisting the MoE in developing offline learning materials and establishing guidelines for responding to COVID-19 at the provincial and district levels.

To further mitigate the effects of the pandemic, the government has entered into various strategic partnerships: among them with EdTech companies to provide free access to online learning platforms, and with telecommunications operations on free internet quotas for teachers and students.

Despite these efforts, however, the structural disparity remains. For many disadvantaged families, the gap is even widening. Some remote areas do not even have electricity, and assisting children with online learning has proven challenging to many parents, especially those of a certain age and educational level.

In some poor villages, children are not even learning from home because the economic tolls of the pandemic have forced their farmer parents to enlist their help in the fields.

To help address this imbalance, UNICEF seeks to continue its partnership with the government by developing and scaling-up programmes aimed at meeting the educational needs of children in remote areas. With your funding and support, these programmes can be rolled out and distributed more quickly and equitably.

For relatively more fortunate children like Moreyna and Joaquin, 8, things are starting to look up.

Maria is certainly aware of the positive shift in her daughter’s behaviour. “Moreyna is much happier studying from home, now that I am regularly by her side,” she says, adding that soon her daughter will attend primary school.

Moreyna is also much more active around the house. Apart from baking, she and her brother have taken up a new hobby—dancing.

After a few months of home learning, Joaquin, 8, is also happier and more confident. “I can still connect with my teachers while studying at home,” he says. “If I have difficulties with my school assignments, I can reach out to them and ask for help.”

How You Can Help

Thanks to the generous contributions of individual donors, UNICEF has been able to work with schools, madrasas, teachers and government officials in the education and religious affairs sectors across Indonesia to help children like Moreyna and Joaquin learn effectively from home.

However, assuming most schools remain closed due to rising COVID-19 cases, not only will parents’ ability to help their children study from home be stretched, but children will also lose, on average, about a third of a year of learning. This loss will affect their capacity to earn in the future.

Given the existing geographical and socio-economic inequalities, scaling-up this support across the provinces requires resources and a sustained effort. For this we need your support.

If you want to help minimize the tolls the COVID-19 pandemic has on our children’s future and make sure they can reach their dreams, please consider donating to UNICEF. We very much appreciate your contribution.

* Now the Ministry of Education, Culture, Research and Technology.

** According to recent World Bank data, 95% of households in Indonesia own television sets. 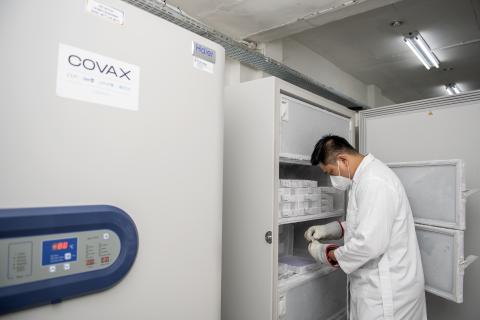 UNICEF is leading the way in delivering critical equipment needing for freezers to store COVID-19 vaccines at extremely low temperatures. 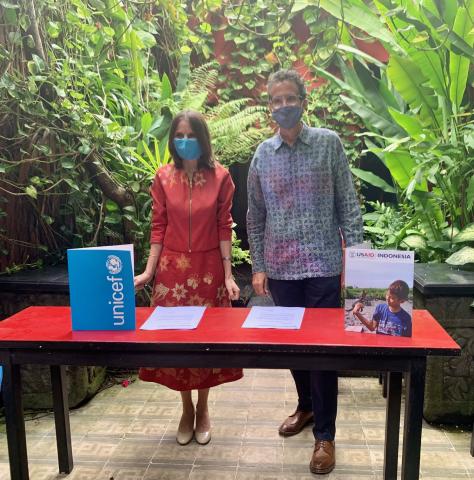