International Day of Persons with Disabilities 2020: The stories of Zoë and Thierry

For the International Day of Persons with Disabilities, our UNICEF colleagues Zoë Gan and Thierry Beniflah share their stories.

I stopped compromising, I stopped cutting out the parts of me that made others uncomfortable, I stopped allowing the opposite sex to make me feel small, and I stopped hiding my mixed-race heritage and disabilities. Instead I began to challenge, I began to find the right language to speak about my truths and I began to feel a sense of empowerment and freedom.

"When I was 7, I landed in the white-washed, predominantly White Irish immigrant suburb of inner-city North Manchester, United Kingdom. I was darker skinned, had a strong Malaysian-English “Manglish” accent (splattered with Hokkien, Bahasa Malaysia and Tamil words of which I did not know the English equivalents). I was not seen as White Irish, I was seen as an odd and foreign entity that did not belong. I was struggling to learn at school. I could not tell the time, my memory was poor, I was unable to sequence the alphabet, the process of reading was baffling, my writing was incoherent, my coordination was all over the place, I was developing tics and I didn’t understand left from right. I had a high intellect, verbally articulated my thoughts well, but struggled to leave any evidence of this. I was labelled as stupid and lazy, even though I spent hours at home trying to read and write, but in time the label began to seep into my psyche. My confidence diminished, self esteem dropped, and I started to believe what they said about me.

At 7 years old, I purposely began a lifelong effort to change my outward appearance in an attempt to conform, to not offend and to assimilate. I quickly lost my accent, constantly straightened my hair, covered up my skin so I didn’t get tanned and taught myself to verbally distract people from my learning disabilities. I didn’t want anyone to see me as mixed-raced (Chinese and White Irish) or a girl with learning disabilities. Labels neither I nor anyone else knew how to deal with. I desperately wanted to belong, and I wanted people to see past my eccentricities and outward appearance. However, all my efforts just ended up with me feeling invisible.

Then when I entered work (before I knew about assistive software), co-workers shared and laughed at my spelling mistakes, colleagues said it was “cute and adorable” that I confused acronyms constantly, supervisors called me incompetent when I struggled to conform to the “normal” ways of doing things, others made cruel comments about my tics and I struggled to progress because I could never pass timed written tests during recruitments. I never told anyone about my disabilities, I was afraid of the label and what it might do to my career. I thought I would been seen as a freak and a drain to an organisation. During those times, I accepted it, never challenged it and felt compelled to hide my intersecting identities (mixed-race/learning disabilities/female), which I thought was the problem. I never labelled it for what it was… racism and discrimination.

In my mid-30’s I’d had enough. I moved back to Malaysia with my young family. I thought it would be different, but the racism and discrimination were exactly the same. My mixed-race face didn’t fit in, my accent was odd, I spoke too confidently for a woman, my hair was still a problem, people demanded I prove my authenticity and they looked away in pity when I mentioned my disabilities. It was then that I realized I was doing myself an injustice  by compromising my identity to fit in the boxes others create. Making myself invisible and trying to assimilate was not going to get people to see me nor was I going to find that sense of belonging I desired.

It was then I changed my tactics. I stopped compromising, I stopped cutting out the parts of me that made others uncomfortable, I stopped allowing the opposite sex to make me feel small, and I stopped hiding my mixed-race heritage and disabilities. Instead I began to challenge, I began to find the right language to speak about my truths and I began to feel a sense of empowerment and freedom. It was also just at this time that I joined UNICEF… I finally got my dream job! My work was everything I had thought it would be – fulfilling, challenging and empowering. However, I could see cracks appearing as my dream became a reality. Many people were not quite ready for my newfound openness and honesty. In the realisation that I had to stop changing myself to fit in, I started to understand that I also had a responsibility to change the environment around me, so it could begin to accommodate me better.

I did this by pushing myself to be open about my challenges and tried not to shy away from difficult conversations. Something strange began to happen… my story - although unique to me - resonated with others. I started to meet and develop allies with others that also had challenges and found themselves having to adapt and compromise just to get by. I realised I was starting to feel I belonged and no longer felt invisible. Now I know my small actions – when combined with others – can affect change! As long as we are brave enough to acknowledge the similarities we share and celebrate the differences that make us unique.

Living with disabilities during the COVID-19 pandemic has completely unraveled all the coping mechanisms I have carefully put in place to manage my day-to-day challenges. I need a quiet place to work, with no distractions, a space where I can concentrate, order my thoughts and access my assistive software efficiently. However, now my lockdown home-work space is shared with my wonderfully noisy children and husband. No quiet corner of the house or noise-cancelling headphones could ever dampen the sound of squeals, laughter, tantrums and the continuous chant of “mummy, mummy, mummy, MUMMY!!!”.

Managing my disabilities and work has always been challenging, but ever since COVID-19 turned up, they’ve become a thousand times harder. However, the arrival of this pandemic has presented me with a glimmer of hope. I have learned that people (in fact the world) have the capacity to adapt, change and do things because it allows others to be safe... even in the face of this global pandemic. My glimmer of hope is that when the health risks, fear and anxiety pass we (the world) hang on to our ability to adapt and change.  With this we could choose to move towards a new type of normal. One that is flexible, responsive, equitable, disability-inclusive and accessible for all!"

Incredible initiatives such as [...] UNICEF's Wellbeing section and the Peer Support Volunteer program, and UNICEF Network of Employees with Disabilities provide an excellent setting for improving mental health at UNICEF… Which to me is a call for action: I want a stigma-free work environment, one where psychosocial disorders are recognized as a disability and where struggling colleagues benefit from reasonable accommodations.

"I am 53 years old and have been a UNICEF HQ employee since November 2010. Between the ages of 20 and 45, I have experienced month-long mood swings: I would either radiate sparkling energy, sleep 3-4 hours a night and eventually lose contact with reality, or suffer from incapacitating depressions and suicidal ideation. I had no idea why this was happening to me.

In September 2011, at age 45, I became heavily depressed. I would stay in bed as much as I could, pretending that I was unwell. At UNICEF, everyday work difficulties would often make me sob. 4 weeks into this episode, I asked for help for the first time in my life! I was referred to a mental health support team who diagnosed me as bipolar and started a treatment based on meds and individual/group therapy. I felt an enormous sense of relief: I was not fundamentally flawed; I was just sick!

I was extremely worried about disclosing this information within UNICEF despite the love and respect I have for our organization. I was ashamed of my condition. I believed that I would be denied any possibility of professional advancement. I thought that my colleagues would mock me or would see all my reactions under the light of “mental dysfunction”. Over time though, I developed effective coping strategies leading to more time spent in a “normal” mood and became more proficient at integrating my treatment requirements with my professional life.

About a year ago, I decided to come out of my psychosocial closet. I was feeling stable enough, could no longer see any advantage in hiding my disorder, and was particularly saddened by the struggles of other colleagues living with psychosocial disorders: As a UNICEF Peer Support Volunteer, I have witnessed the loneliness, pain and sorrow of many co-workers and I have definitely felt and seen the stigma surrounding mental health.

Today, I feel more optimistic about mental health than ever. Incredible initiatives such as the UN World Mental Health Month, the UN Mental Health Strategy, UNICEF's Staff Wellbeing section and the Peer Support Volunteer program, and the UNICEF Network of Employees with Disabilities provide an excellent setting for improving mental health at UNICEF… Which to me is a call for action: I want a stigma-free work environment, one where psychosocial disorders are recognized as a disability and where struggling colleagues benefit from reasonable accommodations. I desire a workplace where workers and managers all share a basic understanding of mental health. And perhaps, over time, see a growing number of colleagues with psychosocial disorders who feel safe enough to step out of their closet, share their stories and inspire others!

Impact of COVID-19 on mental health

More recently, I have experienced the impact of COVID - 19 on my mental well-being. I have been prone to more depressive episodes (this study showed that the prevalence of depression symptoms in the US was more than 3-fold higher during COVID - 19 than before the pandemic. The UN estimates that 49% of our personnel experience symptoms consistent with a mental health condition). I have also realized that my therapy sessions and social interactions are much less effective through Zoom than they are in person. To remain afloat, I have been even more observant of my mental “hygiene” rules: daily physical exercise and meditation, spend time outside, 8-hour quality sleep, control my expenses, daily conversations with members of my support group, be very focused during my therapy sessions, eat healthy meals, watch alcohol consumption, etc…"

At UNICEF, we're constantly striving to be more inclusive. By building accessible offices, making our IT systems accessible, providing reasonable accommodation, to ensure that employees with disabilities can perform their duties without barriers. We strived to shift our culture and break stigma and discrimination to ensure that the number of persons with disabilities working in UNICEF are fully supported in the workplace.

Find out more about Diversity and Inclusion at UNICEF 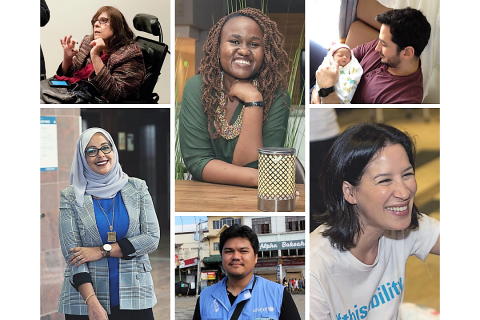 Diversity and Inclusion at UNICEF

UNICEF continuously strives to be a gender-equal, diverse and inclusive workplace for all 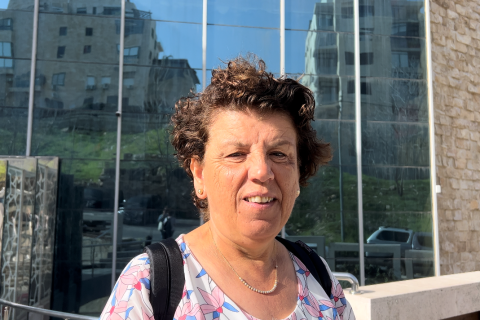 The story of Laila Atshan 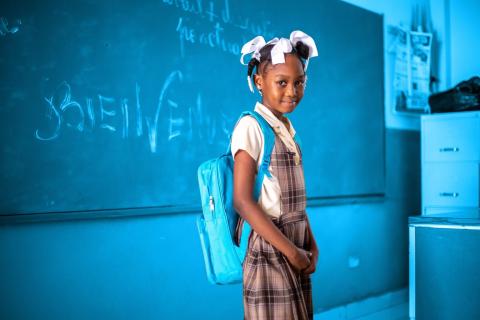 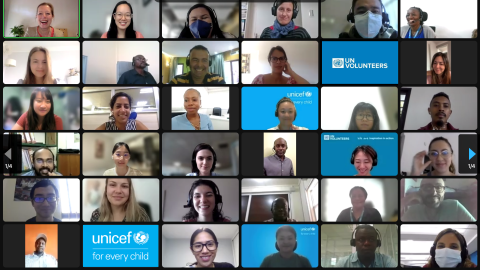