THEN & NOW: Grown-up child climate activists from Zambia look back on 2009’s COP15

Children as agents of change

It started with a UNICEF newspaper advert in early 2009, resulting in four school children being recruited as UNICEF Zambia child ambassadors and going on the trip of a lifetime to the COP15’s United Nations Framework Convention on Climate Change for children in Denmark. More than a decade on, the children have gone on to become graduates in different fields. They credit COP15 with planting seeds whose harvest they are still reaping.

Former climate child ambassador, Luyando Mutale Katenda, looks back on COP15 as a time that taught him that the boundaries of life were larger than he had imagined.

“It was monumental just to be able to make my parents proud and show that I could be a voice for the kids from my community. For me, it was a testament that we don’t necessarily have to use our background as an excuse in as far as what we can achieve.”

In 2008, aged 14, Luyando was reading The Post newspaper in his father’s house, when he saw an advert from UNICEF looking for child ambassadors interested in speaking out about child rights issues.

Luyando had always felt a bit different – preferring to read the newspaper when others were outside playing football. He sent in his essay as instructed, and ended up being selected.

For most of his childhood, Luyando grew up in Lusaka’s Chawama township, living in a two-room house. His parents ran a small community school with a strong vision for child empowerment.

“My parents brought me up to be very confident in as far as expressing my opinions on different social issues. Through that kind of exposure I was keen on being vocal,” he says.

Luyando was selected along with three other Zambian children: Kasaka Katengo, Kondwani Joe Banda and Vanessa Mulima Njovu. The four children were trained in leadership and public speaking. Then, a surprise announcement came from UNICEF headquarters in New York that a children’s conference would be held just prior to COP 15 in Copenhagen, Denmark. The children were asked to apply for passports.

The Conference of Parties, known as ‘COP’, is the decision-making body responsible for monitoring and reviewing the implementation of the United Nations Framework Convention on Climate Change. More than a decade ago, UNICEF had noticed that despite climate change being such a vital topic for the future of today’s children, their voices were hardly heard at such events. This led to the creation of a children’s global climate conference that would coincide with the conference in Copenhagen.

Kondwani Banda was just completing Grade 12 when he was selected. He geared himself up for the conference by researching all he could about climate change and the impact on children – not easy in the days before internet was widespread in Zambia.

“It was my first time travelling out of Africa,” said Kondwani. “It brought all these amazing and super talented children from around the world together. We prepared a presentation to show what issues we were dealing with in Zambia and for us it was flooding.”

While in Copenhagen, Kondwani saw himself as not just a child climate ambassador but as someone who could represent the voices of other children in high density and impoverished communities. He did rounds of interviews with the Danish media and ended up joining the official Zambian delegation at the main COP15 meeting.

For Vanessa Njovu, it was the first time travelling by plane and being away from home. As the date grew close, she grew increasingly nervous.

Once she boarded the flight to Denmark however, her excitement returned as she thought about all she would experience and learn.

“There was a theme song done for the conference which was talking about what we had done to cause climate change and the consequences of those actions and it really touched me,” Vanessa remembers.

After landing in Denmark, she then started adjusting to the weather. Vanessa knew it would be cold but nothing could prepare her for just how cold Copenhagen was in December.

Afterwards, when she returned home, she resolved that change needed to start with her and the people close to her, particularly her friends and family.

“It was just as simple as putting the rubbish in the right place, not littering. For my friends that was a hard concept to deal with, where one day I’m this person and the next I come back from Copenhagen and I’m telling them to pick whatever they throw, even a sweet wrapper,” she says.

Until this day, Vanessa is still influenced by her first climate change conference experience and believes small efforts can have big impact.

Now a medical doctor, she says her COP15 experience left a lasting impression. She says her exposure to new experiences as a UNICEF child ambassador gave her the confidence to stand up and present in front of crowds.

The fourth child ambassador, Kasaka Katengo, was in her early teens in high school when she was selected. She says the experience was incredibly exciting with so many practical examples of climate change being raised, and discussions with like-minded children from around the world.

“A lot of times, it’s usually the adults trying to find the solutions to problems. Being made to feel just as important in the steps towards improving the planet made us feel empowered,” she says. It reinforced Kasaka’s concern about deforestation in Zambia.

“It’s funny looking back – we saw video presentations on the melting ice caps at the conference and it made me a little anxious how fast everything was melting and I kept wondering - will I even graduate?” she recalls. Today, she is a qualified neuroscientist.

“It helped me gain some perspective,” she says. “I don’t make oil spills happen. At most, you throw a plastic item where there is supposed to be compost but that’s not going to change the trajectory of the entire planet. But an oil spill will, a forest fire will,” she says.

When Kasaka returned from COP15, she took time to educate her friends about climate change and also got to plant trees along some streets in Lusaka. During the exercise, she says each tree planted felt like it would save an entire neighbourhood.

Once the four children returned to Zambia, they decided to keep the spirit of COP15 alive. They played a key role in Zambia’s first ever National Children’s Climate Conference National Child Climate Conference in 2010 attended by 300 children from every province in the country. Participants were trained in climate change prevention, mitigation, and adaptation. They were encouraged to start Unite4Climate Zambia clubs in their schools and communities. From there, representatives returned to their schools to set up the clubs, which continue to this day.

A lot has happened since COP15 and the world’s first global children’s conference on climate change. Many environmental pledges have been made and young ambassadors continue to emerge with their own brand of climate activism.

But before Greta Thunberg and Vanesa Nakate, there was Luyando, Kasaka, Kondwani and Vanessa.

“It was nice that I was part of the team that birthed the United 4 Climate Zambia forum. UNICEF had a huge impact on my life and my journey,” Kondwani says about his experience. He now works at a local university.

“Definitely the exposure I got influenced my passions and was instrumental in helping me build a network of people that I could rely on for guidance and mentorship and apply for opportunities I otherwise would not have,” shares Luyando, now in the final year of a masters programme.

“Climate information feels like privileged information. This information is only available if one has access to the media,” says Kasaka. “But children need to learn it in school because they need to know that the earth is their home and it is important. We have natural resources, we have land and we need to make sure we protect that.”

“Taking the step to be able to talk to people was quite a challenge for me in the beginning as I am naturally an introvert but being a UNICEF child ambassador helped me overcome this,” says Vanessa. “Sometimes when I feel like I am shying away, I remind myself that I did it then and was way younger, so I think I can do even better now. It still has an impact to this day.”

This article was part of a series looking back on UNICEF’s work in Zambia as part of the UNICEF75 anniversary commemorations. 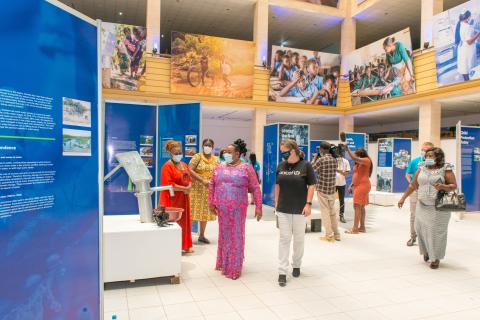 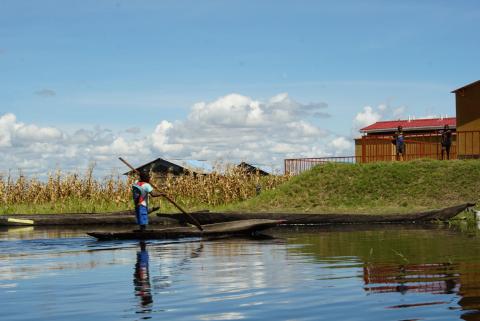 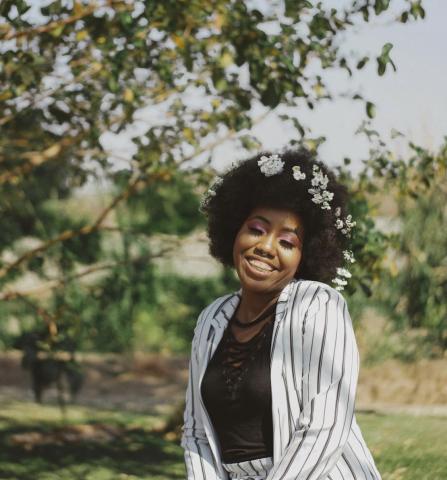 THEN & NOW: Zambian Activists at COP15

Children as Agents of Change 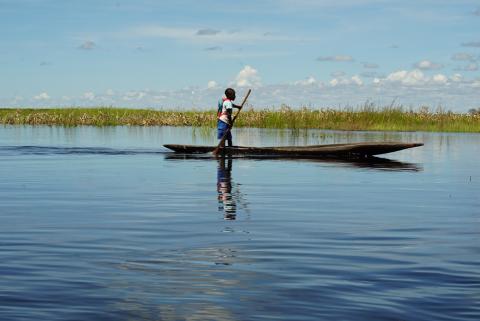 Paddling to school in Zambia

How one primary school in Western Province survives floods