UNICEF@75: Climate change activism and the story of a flood-proof school in Zambia

A small primary school established in 1941 no longer closes with the rains.

Every rainy season, Zambia’s western Barotse plains fill with flood water, covering a vast area close to the border with Angola. As the water levels rise, families living on the plains take to their canoes and move themselves, their animals and their belongings to higher ground for months on end.

In the community of Malabo, 15 kilometres west of the provincial town, Mongu, the small primary school, established in 1941, would close with the rains.

“From January to May, attendance at the school used to be very low because many pupils do not have canoe water transport to get them to class,” says head teacher Mubiana Lubinda.

The school in Mongu came to the attention of two UNICEF Zambia climate change ambassadors, Tambudzai Mutale and Kezman Saboi. Tambudzai was born and raised in Mongu, but in 2010 she joined other young climate activists meeting in Zambia’s capital city, Lusaka for the country’s first national children’s conference on climate change.

“For some of us, attending the Unite 4 Climate conference meant visiting Lusaka for the first time and so we were excited,” she says. At the following year’s conference, she achieved another first – getting to use a computer.

UNICEF/UN0329445/James
Visit to Malabo Primary School on the Zambezi floodplain in Western Province. The school was reconstructed in 2014-15 on a raised embarkment to give protection against seasonal flooding

When Tambudzai attended the inaugural conference it was the first time she had heard climate change issues being discussed in a manner that children could relate to, and at a level they could comprehend.

After the conference, she was inspired to make a difference in her community and together with her fellow child climate representatives from Western Province, approached management at Radio Lyambai in Mongu to host a children’s show. Their proposal was accepted by the radio station and they were given free airspace for a short time. During that period, Tambudzai and her friends used the platform to educate their audience on climate change as well as HIV.

“Feedback on our show was good. It was a call-in programme so we would have young people call and ask questions and we came back with all these cool facts from Lusaka that we had learnt about climate change and were eager to share.”

One of the other activities Tambudzai and her fellow child climate ambassadors took part in was the planting of trees on the Mongu-Lusaka road. Over the years, these trees have grown and can be seen along the road upon entry into to the town of Mongu.

“I remember coming across the concept of floating gardens and floating schools and I believe these were done in some Asian countries. When I returned to Mongu I had a discussion with my dad about floods and how they affect pupils in Western Province,” she says.

Tambudzai and her fellow child climate ambassador, Kezman Saboi met the District Education Board Secretary who pointed out a number of schools that are affected by seasonal floods in Mongu. One of those was Malabo Primary School.

Like Tambudzai, Kezman was born and raised in Mongu and applied to be a UNICEF child climate ambassador at the age of 17 while at St John’s Secondary School in Grade 12. “I thought it was really important to apply for the Unite 4 Climate programme because I wanted to be involved in the community in whatever way, whether small or big,” he says.

Once Tambudzai identified Malabo Primary School as a potential target school for an adaptable flood system, Kezman joined on the trips to the school to help find out the kind of problems that pupils were experiencing on the ground.

“At first I did not think that there were people who were affected by floods that much, especially not the pupils and so when it was brought to my attention, I thought, ‘If we in Mongu are able to go to school and not miss class due to floods, why should other pupils fail to make it to class?’ ” he says.

Around 2012, Tambudzai, Kezman and other child climate activists from St John’s Secondary School began discussing the possibility of a floating school for the children of Malabo. Kezman discovered that children at Malabo Primary were only learning using temporal structures. Some of them were made of thatched grass with temporal roofing that could not withstand a steady downpour of rain.

At this point the UNICEF National Committee of Denmark shared willingness to support the project, and they helped establish a partnership with Elsinore Municipality in Denmark.

Over the course of three years, the project unfolded. A major feature of the project was the embankment the new school would be built on; ensuring it was strong and could withstand floods. Water services were also provided by the sinking of a borehole and the powering of a pump using solar energy.

The school was handed over to the Zambian government in 2015 during an official ceremony graced by the Vice-President, Ms. Inonge Wina. Since completion, enrolment has increased significantly, including 112 students in 2021 in Grade 7, the majority girls.

Looking back on their achievement, Tambudzai and Kezman are proud to have been among hundreds of climate change ambassadors, a programme that continues to this day

“ My whole career is linked to me being a climate change ambassador . Having grown up in a small town, I didn’t have access to so many things. Using a computer enabled me to go online and look for scholarships to study abroad and it’s from there that I was able to get a scholarship to do my undergraduate studies in Turkey.”

Tambudzai now works as a Resource Mobilisation Officer under the World Health Organisation in the island nation of São Tomé and Príncipe.

Kezman currently works as a Data Scientist at the Northern Arizona University (NAU) in the field of Astronomy and Astro Physics and is a Mastercard Foundation Scholar.

“Being a climate ambassador is something that stays with you throughout your life. It’s been over 10 years but the work that I was involved in with UNICEF is something that I still think about. The work I did as a climate ambassador involving research and being able to put your ear to the ground and make observations is very similar to what I currently do,” Kezman shares.

The children of Malabo continue to enjoy the benefits of a flood resistant school thanks to the initiative of UNICEF’s child climate ambassadors and can now possess dreams that will one day take them from Malabo to the world.

This article was part of a series looking back on UNICEF’s work in Zambia as part of the UNICEF75 anniversary commemorations. 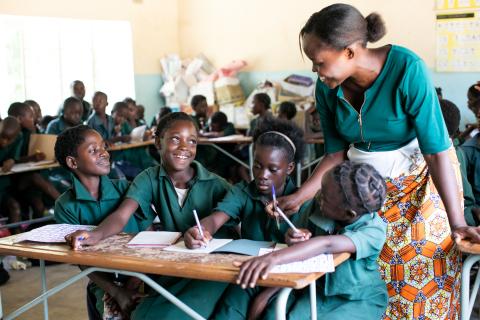 Advancing girls’ education in Zambia in the 1990s 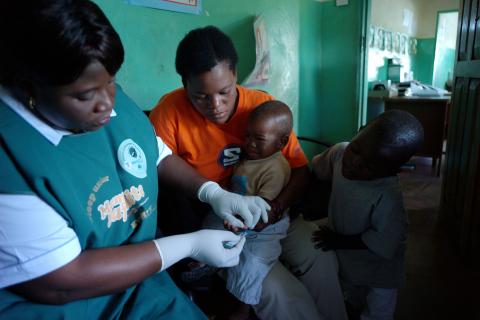 Looking back on the story of Paediatric HIV in Zambia

THEN & NOW: Zambian Activists at COP15

Children as Agents of Change