Behind the scenes of a Yemeni drama Sad Al-Gareeb, a young Yemeni director, Hashem Hashem, pulled together the threads of a new story in collaboration with a group of well-known Yemeni actors.

He wanted the series to blend dramatic creativity with the reality of the daily concerns faced by Yemenis.  With a compelling dramatic plot, he was able to attract viewers, ranking first on TV channels during the month of Ramadan.

"Sad Al-Gareeb" translated into English as "The Stranger's Dam" is a dramatic series that is centered on a  disagreement between two Yemeni villages  which share a water dam. It highlights the negative impact the disagreement has on the lives of the community and their access to water.   The series also addresses a range of social issues affecting many Yemeni communities including lack of adequate clean water, poverty, the spread of diseases such as cholera and the COVID-19 pandemic, and early marriage.

The series is a powerful tool in enabling organizations like UNICEF to engage with communities and tackle some of the most pressing issues faced across the country. The hope is that by empowering people with knowledge, communities will commit to improving hygiene practices and be more aware of child rights issues.

Sad Al-Gareeb which was aired during Ramadan while many people were self-isolating at home due to the spread of COVID-19, has been an effective means of engaging people with the public health threats faced today. By using drama and art and compelling content, it is hoped that audiences are better engaged.

"Sad Al-Gareeb series represents a quantum leap for Yemeni drama. The series has attracted viewers to watch its events daily on TV channels that broadcast it or on YouTube channels that are followed by millions of Yemenis," says Akram Shukri, an adolescent from Sana'a. “The innovative dramatic work has been effectively used as a tool for public awareness-raising,” he adds.

Fikri Qasim, a famous Yemeni journalist, describe the series on Facebook. “Of all the series that have aired on Yemeni channels, I liked “Sad Al-Gareeb”. I feel that it is the best work accomplished with a clear vision,".

"Through the mystery of “Sad Al-Gareeb”, the director succeeded in making the viewers eager for each daily episode to see how the mystery unfolds,” says Um Mohammed Al-Sabery, from Taiz. She adds, “I like to watch this dramatic series because it touched the hearts of the people. It depicts the day-to-day lives of the Yemeni society in rural and urban areas. It also brings to light the suffering of people from water crisis in various governorates, and it further touches upon health and humanitarian issues that impact the youth of the community, particularly women, who have suffered for long."

"Sad Al-Gareeb is a turning point in Yemeni drama, which suffers from many problems, difficulties and limitations."

"Sad Al-Gareeb is a turning point in Yemeni drama, which suffers from many problems, difficulties and limitations." says Abdulsalam Rashid. He explains, "The series dealt with community issues in a high-end dramatic style and different artistic tools from what Yemeni viewers have been accustomed to over the past years. The crew successfully immersed the viewer in a real atmosphere of pain and suffering through the issues addressed in the episodes of the series."

Hashim H. Hashim, the director of "Sad Al-Gareeb" says, "the idea of Sad Al-Gareeb series came from the accumulation of several themes through our work in making documentaries about community projects that deal with issues of concern to the community, including water-related issues and disputes over water resources among villagers."

"We found great suffering in the villages, especially among women who suffer to fetch water from far away, some have died on risky paths. On some instances, there are water projects that can be utilized such as the closed dam. A dam to which people did not have access to benefit due to conflict issues and the intransigence of some people”, he adds

“UNICEF has a golden hand behind the success of this work as it found a solid ground to advocate for many of the issues that such an organization works for. The importance of chlorinating water to avoid diseases such as cholera, COVID-19, kidney failure, etc. were highlighted in the drama,” he adds.

Sad Al-Gareeb is based on a story derived from the real world and presented in a dramatic way to convey the awareness-raising messages to the community.

“We partnered with UNICEF to send awareness and hygiene practices messages to fight against COVID-19 as well.” Mr. Hashim adds. “Therefore, Sad Al-Gareeb intends to raise public awareness about the need for solving many social issues from which we long suffered and are still suffering," he further says. 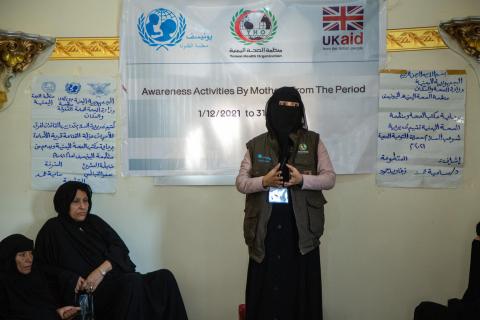 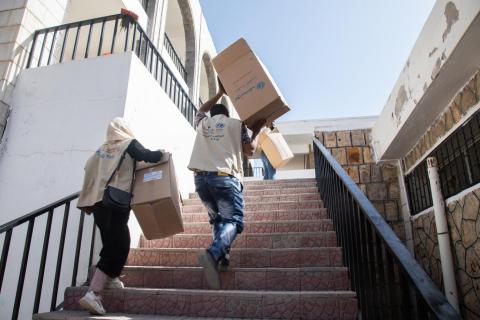 Colorful Masks as a First Step to COVID-19 Awareness 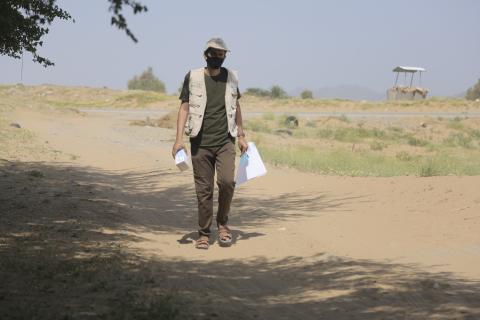 Community Mobilizers Make a Difference in the Field

The proper tools to educate the next generation