75 years supporting the most vulnerable children

Discover the story of UNICEF and its efforts to reach every child, including those in Venezuela

In December 1946, a year after the end of World War II, millions of children suffered from deprivation of access to basic services and food, consequences of the war. Faced with this reality, the United Nations Assembly announced the creation of the United Nations International Emergency Fund for Children (UNICEF) with the aim of organizing emergency relief programs to meet immediate post-war needs. Just 5 years after its establishment, UNICEF was active in almost 100 countries.

In 1953, the United Nations General Assembly gave the organization a long-term mandate, not only to respond to emergencies but also to promote the rights of the child on a permanent basis. It was renamed the United Nations Children's Fund, keeping the same initials, and thus becomes the first international organization for children in history.

75 years later, the UNICEF mandate remains in force and the world faces a new challenge: a pandemic that disproportionately affects children and adolescents. In the midst of this panorama, UNICEF once again works tirelessly in more than 191 countries, including Venezuela, for the rights of the most vulnerable children.

As part of this story of tireless work for children, learn about UNICEF's journey in Venezuela and the world:

(Left) Around 1950, in the northwestern city of Castoria, Greece, a boy holds up a blanket provided by UNICEF, clutching a woman's skirt. (Right) In 1999, during the rainy emergency in Vargas state (today, La Guaira state), UNICEF personnel were deployed, after coordination with national authorities, to provide assistance to affected populations who had lost their homes.

(Left) In 1946, in Germany, boys and girls -most of whom had lost their parents in concentration camps- perform a folk dance in an army telecommunications camp. (Right) In 1999, in Venezuela, boys and girls participated in a recreational activity in Caracas, as part of the psychosocial care program called El Retorno de la Alegría, after the emergency caused by the rains registered in La Guaira.

(Left) In 2000 in Afghanistan, children collect water through a hand pump on the outskirts of the city of Laghman. (Right). In 1999, the UNICEF team in Venezuela together with the community-led projects to provide drinking water, environmental sanitation, and hygiene education in the Páez municipality of Zulia state, affected by a national emergency due to rains.

(Left) In 2012, a member of the School Brigade demonstrates proper handwashing techniques at a school in Bangladesh. (Right) In 2012, in Caracas, UNICEF began a campaign to increase awareness and understanding of the importance of handwashing with soap to prevent disease and thus reduce infant mortality.

(Left) In 1972 in South Vietnam, two visually impaired children read Braille. Despite the hardships of the war, schools for children with special needs were created, supported by UNICEF. (Right) In 2014, Dario Moreno, UNICEF Venezuela Education Technician, promoted the Convention on the Rights of the Child among indigenous students from the Añú community; as part of the Intercultural Bilingual Education program, in a school located in Laguna de Sinamaica, Zulia state.

(Left) Around 1950, in a town in Guatemala, five-year-old Norma Salandia has her mouth and nose covered in frothy milk, which was provided by UNICEF. (Right). Children in a nursery located in a health center in Valles del Tuy in Venezuela receive their daily dose of fortified skimmed milk, with a different flavor each week. In the Valles del Tuy, UNICEF enabled a pilot training program for health service providers for the entire country.

(Left) Around 1949, in India, a health worker vaccinates a child against tuberculosis in the city of Faridabad, near Delhi. (Right) In 2020, Isaac Novoa, 9, is vaccinated against yellow fever on a vaccination day held in Caracas. UNICEF supports the regular national vaccination program through the purchase of vaccines, technical training for health personnel, and the strengthening of the cold chain for the preservation of vaccines.

(Left) In 2012, children displaced by inter-ethnic violence played volleyball, in a space conditioned with support from UNICEF, in South Sudan. (Right) In 2007, Venezuela hosted the Copa América regional soccer sporting event. Within the framework of the sports fair, UNICEF launched its campaign With children, yes, you win. In the photo the Argentine national team player, Lionel Messi, holding the hand of a Venezuelan child during a match.

(Left) In 1960 in Ghana, a midwife weighs a child on a scale as part of a comprehensive long-term rural health plan, promoted by UNICEF, which emphasized the training of medical personnel in Tuma. (Right) In 2020, 4-year-old Anita plays in the backyard of her home in an indigenous community in the state of Zulia. She suffered from malnutrition and received treatment thanks to the work of UNICEF community promoters.

(Left) In 2012, girls from an indigenous community located in the Atures municipality of Amazonas in Venezuela perform a dance typical of their culture, within the framework of a UNICEF visit to identify opportunities to improve access to education for children, indigenous girls, and adolescents and content relevant to their language and ethnic origin, as part of the intercultural bilingual education program. (Right) In 2020, 8-year-old Zunilda and other children of the Hoti ethnic group in San José de Kayamá, Bolívar state, smile at the camera during a visit by the UNICEF team to deliver the vaccines to the communities that are in more remote areas, where it is only possible to access by air or river.

(Left) In 1989, Audrey Hepburn, UNICEF Global Goodwill Ambassador, with a group of children in Bangladesh. At that time in the country, UNICEF programs included support for the installation of 750,000 wells; the supply of 14 million school textbooks; support for a national vaccination campaign against six preventable diseases; distribution of vitamin A to strengthen the immune system; and the provision of iodized salt to prevent deficiencies that cause goiter and cretinism. (Right) In 2010, journalist Alejandro Cañizales, UNICEF Venezuela National Goodwill Ambassador, poses with a group of children in a community in Petare, Caracas. The journalist was a great promoter of children's rights and participated in the dissemination of events such as the Carrera por el Buen Trato.

In 2017, the System of Youth and Children's Orchestras and Choirs of Venezuela, UNICEF National Ambassador in the country, during the Concert for Good Treatment co-organized by UNICEF to promote, within the framework of World Children's Day, a campaign against the child abuse, under the premise For each child, only traces of good treatment.

(Left) In 1961 in Japan, UNICEF Global Goodwill Ambassador Danny Kaye attends a meeting in Tokyo in which boys and girls from seven Asian countries participated to commemorate the 20-minute documentary "Assignment Children ", which Danny Kaye did for UNICEF seven years earlier, in 1954. The film is a record of Mr. Kaye's tour of UNICEF projects in Asia. (Right) In 2016, Fredo Fox and colleagues from the Spanish Committee for UNICEF play with children from the Galipero Village in Amazonas. UNICEF provides support in health and education to indigenous communities in the state of Amazonas located in southern Venezuela.

And this is how these images show it, that for 75 years in the world and more than 50 in Venezuela, UNICEF has worked tirelessly to reach every child. Always re-imagining a better present and future for them.

Currently, UNICEF Venezuela works in coordination with the country's authorities, society, civil society, academia, the private sector, and other actors of Venezuelan society in programs of Health, Nutrition, Education, Child Protection, Water, Sanitation, and Hygiene. and response in emergencies such as the COVID-19 pandemic, to try to reach all children and adolescents, especially the most vulnerable. UNICEF's work in Venezuela and in the world is guided by the humanitarian principles of Impartiality, Neutrality, Humanity, and Independence and is based on the premise that no child is left behind in the fulfillment of their rights.

"When I come here, I feel like I am fulfilling a dream"

More than 160 adolescents from Guasdualito, Apure state, have received training in life skills and guidance to create their life project. 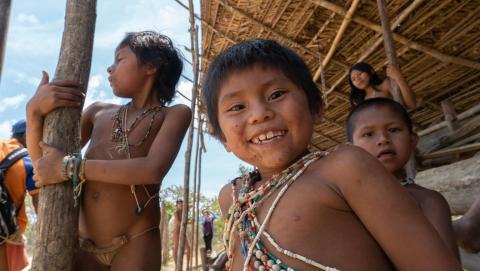 Right to Enjoy one's Own Culture 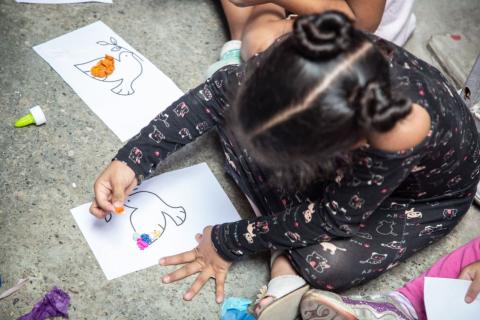 Right to protection against violence, exploitation and abuse