Two and a half decades after the historic Beijing women’s conference, violence against women and girls still not only common, but accepted 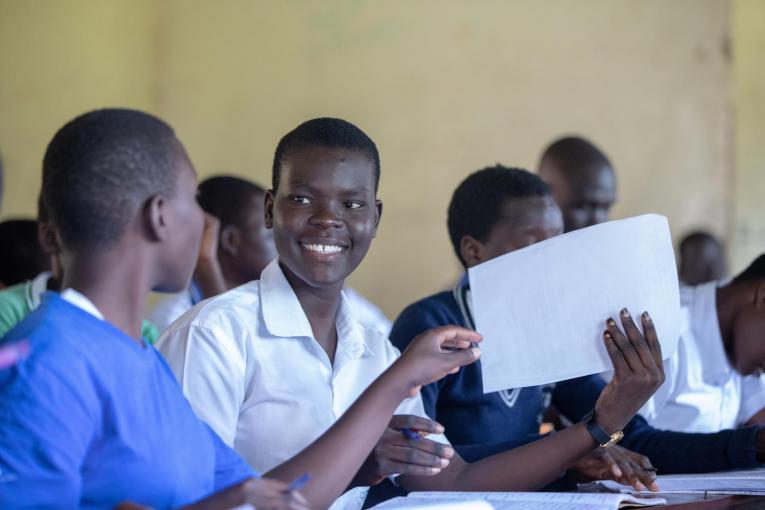 NEW YORK, 4 March 2020 – More girls are going to school and staying in school than ever before, but remarkable gains in education have made little headway in helping shape a more equal, less violent environment for girls, UNICEF, Plan International and UN Women warned today in a new report.

The report, released ahead of the 64th session of the Commission on the Status of Women, notes that the number of out-of-school girls has dropped by 79 million in the last two decades. In fact, girls became more likely to be in secondary school than boys in just the last decade.

Yet, violence against women and girls is still common. In 2016, for example, women and girls accounted for 70 per cent of detected trafficking victims globally, most for sexual exploitation. An astonishing 1 in every 20 girls aged 15-19 – around 13 million – has experienced rape in their lifetimes, one of the most violent forms of sexual abuse women and girls can suffer.

“Twenty-five years ago, the world’s governments made a commitment to women and girls, but they have only made partial good on that promise. While the world has mustered the political will to send many girls to school, it has come up embarrassingly short on equipping them with the skills and support they need not only to shape their own destinies, but to live in safety and dignity,” said UNICEF Executive Director Henrietta Fore. “Access to education is not enough – we must also change people’s behaviours and attitudes towards girls. True equality will only come when all girls are safe from violence, free to exercise their rights, and are able to enjoy equal opportunities in life.”

The report, A New Era for Girls: Taking stock on 25 years of progress, is issued in the context of the Generation Equality campaign and to mark the 25th anniversary of the Beijing Declaration and Platform for Action – the historic blueprint for advancing women’s and girls’ rights.

“It is vital that we hold governments to account on their commitment to the historic Beijing Declaration, and this report offers a wholistic picture of what the world looks like for girls 25 years on,” said Plan International Chief Executive Officer Anne-Birgitte Albrectsen. “Adolescent girls, in particular, suffer heightened discrimination as a result of their age and gender and yet continue to be side-lined in their communities and in decision-making spaces, largely invisible in government policy. Empowering adolescent girls yields a triple societal benefit – for girls today, the adults they become, and the next generation of children. If we fail to grasp this and to end the discrimination girls continue to face the world over, we will stand little chance of achieving the gender equality ambitions set out in Agenda 2030.”

“Since 1995 in Beijing, when a specific focus on ‘girl child’ issues first emerged, we have increasingly heard girls assert their rights and call us to account. But the world has not kept up with their expectations of responsible stewardship of the planet, a life without violence, and their hopes for economic independence,” said UN Women Executive Director Phumzile Mlambo-Ngcuka. “As long as women and girls have to use three times the time and energy of men on looking after the household, equal opportunities for girls to move from school into good jobs in safe workplaces are going to be out of reach. For everyone’s sake that’s got to change, along with making sure that the skills girls learn are right for the new tech and digital jobs of the future, and that the violence against them ends.”

Girls today are at a startling risk of violence in every space – both online and in the classroom, home and community – leading to physical, psychological and social consequences. The report notes that harmful practices such as child marriage and female genital mutilation (FGM) continue to disrupt and damage the lives and potential of millions of girls globally. Each year, 12 million girls are married in childhood, and 4 million are at risk of FGM. Globally, girls aged 15-19 are as likely to justify wife-beating as boys of the same age.

The report also points to concerning negative trends for girls in nutrition and health, many of which were unimaginable 25 years ago. For example, globalization, a shift from traditional diets to processed, unhealthy foods and the rapid expansion of aggressive marketing techniques targeting children, have resulted in increased consumption of unhealthy foods and sugar-sweetened beverages. This has contributed to an increase in overweight and obesity in childhood and adolescence. Between 1995 and 2016, the prevalence of overweight among girls aged 5-19 has nearly doubled from 9 per cent to 17 per cent, resulting in nearly twice as many overweight girls today (155 million) than in 1995 (75 million).

The report calls for action in the following areas:

•    Celebrating and expanding opportunities for girls of all backgrounds, ethnicities, and income and social status levels to be bold and ambitious changemakers and solution designers – actively engaging their voices, opinions and ideas in dialogues, platforms and processes that relate to their bodies, communities, education and futures.

•    Increasing policy and programme investments to scale up promising models that accelerate progress for and with adolescent girls aligned to today's world reality, including their skills development for the fourth industrial revolution and a generational movement to end gender-based violence, child marriage and FGM.

•    Increasing investments in the production, analysis and use of high-quality age- and sex-disaggregated data and research in areas where knowledge is limited – such as gender-based violence, 21st century skills acquisition, adolescent nutrition and mental health.

Notes to Ugandan Editors:
Uganda continues to register gains in education through increased enrolment of children – boys and girls with the introduction of Universal Primary Education (1997) and Universal Secondary Education (2007). Approaches to improve school environments by encouraging teachers to practice positive discipline, promotion of gender responsive methods of teaching and adolescent friendly environments and participation are prioritized to reduce violence in schools, empower children and adolescents as well as equip them with life skills.

Despite the gains made in schools, other forms of violence against children in homes and communities are common and manifested throughout their lives, becoming an obstacle to growth and negatively impacting on their childhood. Children and adolescents especially girls continue to be affected by multiple interrelated vulnerabilities, including exposure to physical and sexual violence, child marriage and teenage pregnancy, among others. For instance, the first ever Violence against Children Survey (2018) indicated that 1 in 3 (35 per cent) of girls experienced sexual violence during their childhood; 3 in 10 girls and 4 in 10 boys experienced physical violence and 8 in 10 girls experienced emotional violence. In addition, harmful practices such as early marriage and female genital mutilation continue to prevail in some parts of the country. An estimated 40.4 per cent of 20-49-year-old women were married by the age of 18; 11.6 per cent were married by the age of 15 and 1 in 4 teenage girls (15-19 years) are pregnant or have a child (Uganda Demographic Health Survey, 2016). Among women and girls in Amudat District, Female Genital Mutilation/Cutting is estimated at 43 per cent (FGM/C Survey Report, 2017).

To address all forms of violence against women and children, the European Union and the United Nations will launch the Spotlight Initiative: To eliminate violence against women and girls, a global multi-year partnership on International Women’s Day, 8 March 2020, in Mbale District. The Spotlight Initiative coordinated by Ministry of Gender, Labour and Social Development is supporting concrete measures to end violence with a special focus on prevention, protection and provision of services; promoting children and women’s economic empowerment and participation in all aspects of society and will be a catalyst for strengthening the country’s protection system. 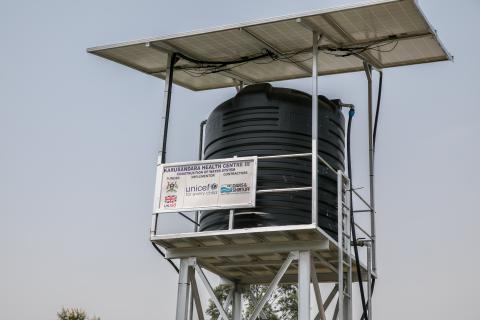 Karusandara Health Centre III in western Uganda gets safe an 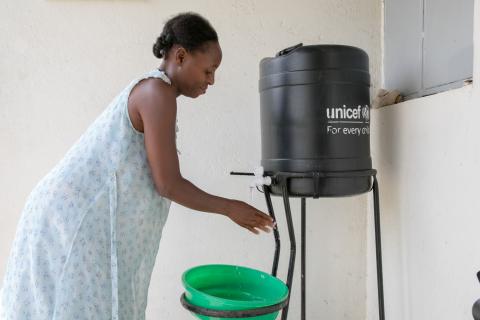 No cholera in Kasese for the first time in 13 years

“This year we have so far experienced two sets of floods, but no water borne disease outbreaks have been registered” 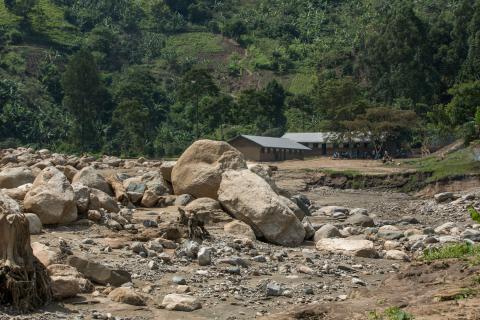 Floods wash away five schools, cut off 24 in western Uganda

“Before the floods, our classrooms were good. We had benches and many things, but all these were taken" 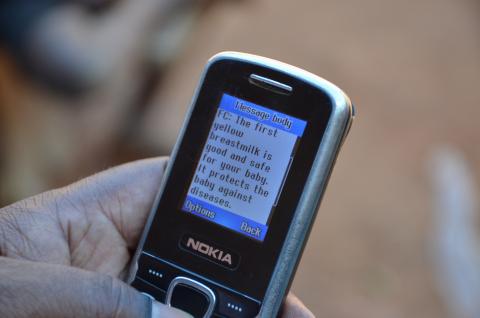 Improves access and delivery of health services at community level