LUONYAKER, SOUTH SUDAN- It was 6pm and I was enjoying a cup of tea at the end of my first day in Luonyaker, when I saw a man hand-wheeling himself around the corner of the tea shop. Loud music was coming from the megaphone fixed at the side of his tricycle and behind him a trail of dancing children giggling as they were trying to keep up with him. This was the first time I saw James Giir Thiik and the following is my heartfelt tribute to a grand man I have the utmost respect for.

My tea turned cold as I was watching the spectacle. The music stopped and was immediately replaced with a firm voice trumpeting: “Aa week kɔc tɔ̈ thuuk ëbɛ̈n. Wäl tuany cɔl Polio abï lɔ aɣeer nhïäk rial ku ala tënë mïth jɔɔk run ka dhïc dhuk piny.” It means; the polio campaign is starting tomorrow and all children under five should be taken for vaccination. He paused a bit before he continued; “Look at me! If this vaccine was available when I was a child, I wouldn’t have lost my legs.” I got up immediately and dashed over to James to introduce myself. With awe in my voice I thanked him for his touching testimony, and we decided to meet up the day after. I was filled with excitement and the tea was never finished.

Luonyaker is a small town in Gogrial east county, central west in South Sudan. I was on mission from the capital Juba to support the Polio National Immunization Days (NIDs), an important vaccination campaign aiming at immunizing children against poliomyelitis, or polio as most people say. The virus is attacking the youngest and most vulnerable among us and can kill and leave children crippled for life. I’m quite passionate about protecting children in my country from this awful disease, but for James it is personal.

We met up the next day and I invited James to join us as we were conducting a mobilization campaign alerting people about the upcoming vaccination campaign. Every time we stopped, and James rolled down his window to position the megaphone, it took only a few seconds before I could hear: “It’s Giir”. “They have come with Giir.” A lady I spoke to even referred to him as a physician. “This is our doctor who tells us about child immunization at the health facilities and this one where they come to put the two drops in the mouths of our children at homes.”

James has now joined the UNICEF supported integrated community mobilization network (ICMN), which comprise of 2,500 women and men who raise awareness on critical issues such as health, education and hygiene across South Sudan. Dressed in the blue apron and cap, as the rest of the network members, the 32- year-old is hand-wheeling himself through town using only one arm. With the other arm he is holding the megaphone. He starts seven in the morning and finishes often as late as nine in the evening, as he knows he needs to be active when people are home and ready to listen. He often works for hours and hours without a single bite or a drop of water. For those who have been to this place, especially before the rain sets in, know this is no easy feat as the scorching sun is merciless. It says a lot about his determination.

I’m quite passionate about protecting children in my country from this awful disease, but for James it is personal.

I asked James what his biggest challenge as a social mobilizer is and expected him to complain about the low salary. Instead, he pointed at his leg and said, “Look at my leg,” then he pointed to his bike. “I want to reach  more people in different villages but this can’t take me there, as the roads are too rough and the bike not made for it.” All he wants is a motorized tricycle to expand the amazing work he is doing.

Ok, one last story about James. As schools across South Sudan had closed due to COVID-19, UNICEF and education partners initiated a distant learning programme on radio and for the most vulnerable families also solar powered radios were provided. I called Giir to get his views on who in his area should be prioritized for the radio distribution, as the number of radios were limited. To my surprise, he had already mapped all the most vulnerable children in the ten villages that he covers and could provide me with names immediately. He also made the case that at least one family from each village should be picked, so every child in every village would get the chance to learn.

James is a true inspiration to me and everyone who crosses his path. Being paralyzed by polio could have destroyed his life but instead, the father of two turned it into his life’s biggest mission and is making a difference in thousands of children’s lives. “I don’t want any other child to suffer like me when vaccines have come to save their lives,” James finishes.

UNICEF's integrated community mobilization network is generously supported by Centre for Disease Control (CDC), GAVI, The African Development bank, the Federal Republic of Germany through KfW Development Bank, The Kingdom of the Netherlands and UK Aid. 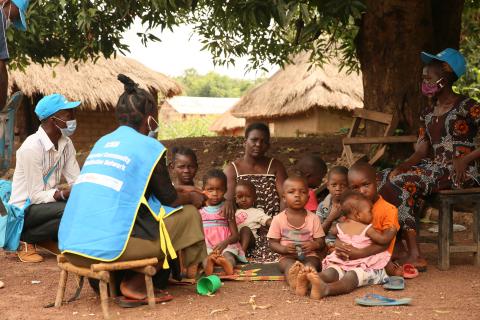 Beating the odds to get the COVID-19 vaccine

Unrest and vaccine myths in Malakal don’t stop the jabs 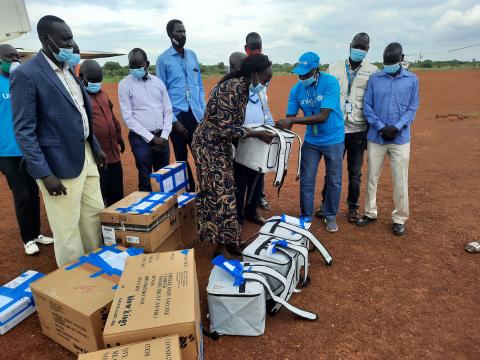 A dash of hope with a poke in the arm

Over 1000 people vaccinated for COVID-19 in Jonglei State