The Second Chance programme aims to get children back on track by moving them away from the judicial system – and towards solutions which might improve their long-term prospects.

Uros Savkovic is locked in a one-on-one duel with Ivan Djordjevic.

They duck, dodge and feint around the concrete basketball court, battling for possession.

At 18, Uros has youth on his side. But Ivan has the benefit of experience, and comfortably matches his opponent, basket for basket.

It makes for an illuminating insight into the relationship between the pair.

They are playing at the Kneginja Ljubica Day-care Centre in Kragujevac, central Serbia, where Ivan is a specialist pedagogue and Uros is one of his protégés.

Their initial meeting came thanks to judicial officials. Rather than require Uros to stand trial for theft, the court issued a diversion order – mandating regular attendance at school and weekly visits to the day-care centre.

The younger man admits he was initially less than thrilled by the prospect.

“At first I didn't have any desire to change my behaviour – I didn’t even want to come here,” he says.

Ivan and the rest of the staff at the centre often have to face this kind of reluctance. The court has referred dozens of young offenders their way this year, as part of the Second Chance programme. The programme is part of a broader, 3-year project to advance the rights of the child by strengthening the justice and social welfare systems which is implemented by UNICEF in partnership with Serbia’s justice and social welfare ministries, with funding from the European Union.

The Second Chance programme aims to get children back on track by moving them away from the judicial system – and towards solutions which might improve their long-term prospects. Instead of a date in court, judicial officials can prescribe a different – and more constructive – kind of medicine. Diversion orders usually involve community work, regular school attendance, counselling sessions – or a combination of all three.

At the Kneginja Ljubica centre, Ivan and his colleagues conduct group and individual counselling. But children referred there can also participate in a range of activities, including sport, art and cooking.

“Later, we’re trying to motivate them – to do well at school, to improve family relations and establish two-way communication. UNICEF has recognised the importance of diversion orders in re-socialising children in conflict with the law or those who have behavioural problems.”

Judicial officials in Kragujevac share the pedagogue’s enthusiasm for the Second Chance programme. Not only does it reduce the number of young offenders passing through court – the early evidence suggests that participants are less likely to fall on the wrong side of the law in the future.

“The programme is excellent,” says Nenad Jovanovic, the Deputy to the High Prosecutor of Kragujevac.

“It’s an opportunity for children to rethink their behaviour. The children who have been involved in this programme never reoffend – there has not been a single incident.”

Judicial officials and social workers agree that keeping young offenders out of court is crucial if they are to develop into productive members of society. The Second Chance programme and diversion orders offer an opportunity for redemption that might not previously have been available.

“Children are given a second chance to realise that what they’ve done is negative,” says Nenad Jovanovic.

“This way they avoid court proceedings and the accompanying negative effects on their psychological health. They realise what they’ve done wrong and how to correct their behaviour and redirect themselves in the future.”

Ivan suggests that many of the children referred to the Kneginja Ljubica centre have been transformed by the experience.

While counselling offers a chance to reflect on how they could behave differently, the sports and creative programmes give children the opportunity to cooperate with others and see the best in themselves.

“Some of the children wanted to play in a local football tournament, representing the day-care centre. They demonstrated all the good traits we’re trying to teach them here – like fair play and good behaviour. They lost all their games, but they represented themselves in the best possible way,” says Ivan with a proud smile.

The special pedagogue also emphasises that the young offenders’ families play a crucial role, not just attending counselling sessions but working to make sure they became a stabilising influence.

“Parents have actively participated in many activities. Their support was very important in the implementation of our work with the children.”

As for Uros, he overcame his initial reluctance and stuck to the terms of his diversion order, not just staying in school but successfully graduating. He says that his weekly visits to the centre were the key.

“The whole atmosphere is very friendly here – they’re encouraging us to do something with our lives, do our best – and that's the most important thing.”

Now Uros continues to spend time at the centre, even though he is no longer bound by the diversion order. He says that “something happened in his head” which radically changed his worldview – from a sullen boy who did not feel part of society to a young man who wants to succeed – and he credits his mentor, Ivan, for the change.

“I saw that someone who was not related to me took good care of me – they really wanted me to change and succeed. Since then I changed my behaviour – something has changed in my head.”

As Uros and Ivan prepare to continue their basketball face-off, thoughts turn to the future – and the young man offers perhaps the ultimate compliment to his mentor.

“I'd like to be a special pedagogue – and I hope I'll achieve this goal in the coming years,” says Uros.

“Is there anything you’re afraid of?” asks Ivan.

“Now, I don’t have any fears,” replies Uros with a smile. 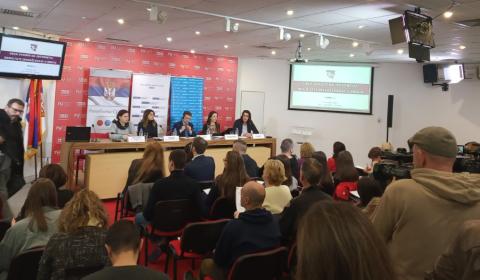