“I had no idea what a school looked like,” says 15-year-old Yasmeen Abdullah as she completes her class assignment. The teenager lives in Haji Abdur Raheem Goth, a remote village situated in Balochistan’s Lasbela District.

“No one in my immediate family went to school as there was none located in or around my village. My distant cousins, who often visit us from Karachi, used to tell me stories about their school and their classmates. I used to listen to them with fascination and wish I could also go to school,” she adds.

Like most conservative rural communities, parents and village elders in Haji Abdur Raheem Goth are unwilling to send their daughters to school if the facility is located too far from the village. Most men work as farmers and children and women usually support them in the fields. This and the fact that there was no education facility close to home left no opportunity for Yasmeen and the other girls in the village to learn how to read and write. Instead, the young girl would help her father grow tomatoes and wheat on the family field every day.

"I had no idea what a school looked like. No one in my immediate family went to school as there was none located in or around my village,"

Yasmeen was far from being the only girl or boy deprived from an education. In Pakistan, nearly 23 million children (44 per cent children aged 5–16) are out of school. In Balochistan alone, 70 per cent of children are not in school. The distance to school from home is one of the primary factors that determines if a girl or a boy can enroll or not.

But sometimes, dreams come true. Yasmeen’s dream of going to school finally came true thanks to the opening of the Muhammad Bakhsh Qalandrani Accelerated Learning Programme (ALP) Centre near her village. It is one of 81 ALP centres opened in Balochistan by the provincial government with support from UNICEF and funding from the Norwegian National Committee in areas where no educational facility was previously available. This has enabled more than 3,500 girls and boys to realize their right to education at last – including Yasmeen.

“School was a completely new experience,” the fifth grader tells. “I learned how to read and write in English and Urdu. I made new friends and I read about different places in Pakistan which I wasn’t aware of. I was also taught the importance of washing my hands and keeping my home and the community clean.”

Yasmeen’s educational journey began in 2017 when a team of community mobilisers visited her home and told her father Abdullah about the ALP centre. Abdullah was glad at the prospect of sending his eldest daughter to school but worried about the fees. When he learnt that classes were given for free, he visited the centre and agreed to send Yasmeen the very next day.

The family elders would not allow Yasmeen to walk to the centre, which was located two kilometers away from home. Abdullah decided to drop and pick his daughter daily from the centre on his motorbike so she could attend anyway.

Abdullah was impressed with what his daughter was learning.

“Yasmeen would come home and tell me different English and Urdu words that she learnt. She would teach her siblings how to count in both languages” he says. “The following year, I decided to enroll all of my children in the centre. Now I drop all of them there every morning before I go to the fields.”

Abdullah himself was unable to get an education due to the financial constraints his family faced, and to the lack of a school located nearby.

“A person without an education is unable to see despite having eyes. Education gives you exposure to the world and provides you with new opportunities. My father was an uneducated farmer and so am I. But my children will have an education and they will be able to choose a professional field. Education will help break the cycle of poverty on my family,” Abdullah tells.

Following in his footsteps, other parents in the village have since enrolled their children in the ALP centre as well.

"A person without an education is unable to see despite having eyes."

The UNICEF-supported ALP centres teach an accelerated curriculum. This helps children who have never been to school or who dropped out catch up with the years of schooling they lost, even if they are overage, after which they can then reintegrate the mainstream education system from Sixth Grade.

Community mobilization plays an important part in the project by convincing parents to enroll their children in an ALP centre.

“The programme thrives on community support,” explains Hamid Baqi, UNICEF Pakistan Education officer in Balochistan. “Governments and international organisations create models, but the communities are the ones that must own these initiatives if we want to have the sustained and long-term results that we strive for.”

For Yasmeen and her siblings, the results will be life changing. 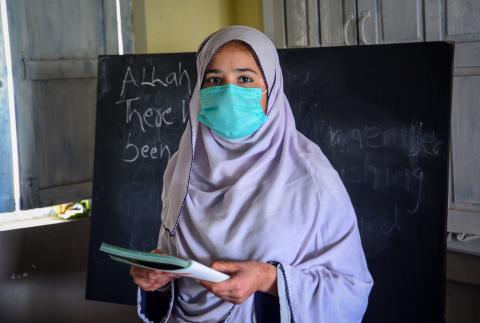 Bringing Out-of-School girls Back to Education in KP

In Hangu District, 18 ALPs have been established in existing primary schools for girls and two in villages which did not have a school. 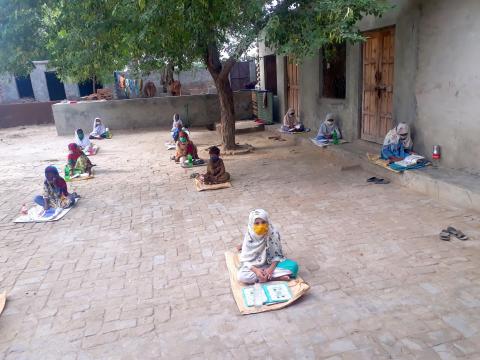 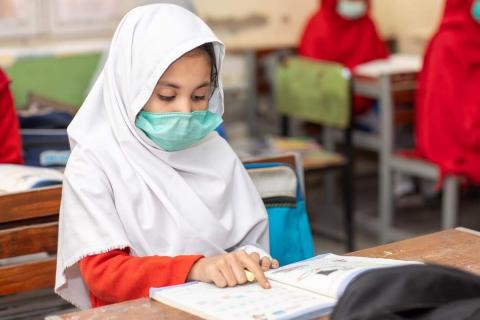 Learning continues for students in KP despite the pandemic