Alternative energy sources are the future

When someone gets a good idea, no matter how innovative and interesting it is, it often happens that there are not enough funds and support to make it real.

Petar, Marija, Leonid, Teodora and Elena, got the opportunity that many dream of - to come up with an idea and get the support and guidance to achieve it. The five students from the vocational high school “Vlado Tasevski” in Skopje are one of the winner teams of the UNICEF supported UPSHIFT initiative for innovative solutions to reduce the harmful effects of climate change.

The UPSHIFT programme combines social innovation workshops, with mentorship, materials and seed funding, equipping young people with skills. It starts with a local call for self–starting groups of 13-19-year olds to design an innovative solution to a social problem they have identified in their community and continues with participation in design thinking workshops to develop their ideas.

“At the design thinking workshop, we presented the concept of a solar panel bench serving as a point for charging mobile phones in our schoolyard and were thrilled when it was announced that we were granted seed funding to realize the idea,” says Petar.

During the summer, under the guidance of their teacher and mentor Vesna Zivaljevic, the group spent hours online developing the idea. Vesna Zivaljevic says that “it is amazing how creative students get during extracurricular activities”.

Their first step was to create a website where they posted SMART bench team “manifesto” to inspire students, teachers and communities to start similar initiatives:

And continue: “With our solar panel bench we want to show that there is an alternative, that some of the electricity we have produced so far from non-renewable energy sources (eg by burning coal in thermal power plants) can be used from the sun. By using solar energy, we can stimulate economic growth, create opportunities for new employment, improve the well-being of people and contribute to creating a healthy environment for all of us.”

Their next step directly involved schoolmates and teachers. In the autumn they conducted a small poll, asking their peers what they thought about the proposed idea. Based on peer’s feedback the team significantly changed the initial design – the students proposed developing two connected benches, rather than one, with a solar panel and mobile phone charger in the middle so that more children can sit and socialize which is what the bench looks like now.

In parallel, the team was collecting evidence to support their proposal and to encourage other students to get involved and learn more about environment and climate change.  Passionate about numbers, Petar and Leonid applied different research methods to find and analyse data to support their cause. They searched official electricity company websites, environment reports and analyses and came up with a rough calculation of the annual pollution level generated from charging mobile phones.

“There are 2 million mobile phone users in the country. A charger needs approximately three hours to charge one mobile phone per day and knowing that 15 watts are needed for one hour, the daily usage will be 45 watts. And to charge all mobile phones in the country, we need 90,000 kilowatts per day,” explains Petar who did an additional research and found out that at an annual level this is equivalent to 13,775 tons of lignite coal - the lowest grade coal and the most harmful to human health - which is used for local electricity production. Therefore, using renewable energy sources, such as solar energy instead of lignite coal, can significantly decrease the release of harmful air pollutants and particles which contribute to poor air quality, but also the release of CO2, which contributes to climate change.

During the process the team did not struggle much to apply their technical knowledge and get real hands-on experience. But the process put them in totally new roles that required building many other skills.  Negotiating skills because they are currently talking to the main mobile phone companies to secure a router for the school; presentation skills because the team worked on promoting the idea to all schoolmates and their teachers; and managerial skills as they had to work with a company to actually make the bench.

In this endeavor they were led by “an urge to come up with new green idea” and “to show that we can”.

“We wanted to demonstrate that this is possible. Our bench is an illustration of the unused potential of solar energy to reduce carbon emissions,” says Marija.

While talking about climate change, they also highlight that, while all of us are becoming increasingly aware of climate change, little actually happens to reverse the trend. “This is because we think there is still time to fix the climate and whatever happens it will not affect our generation,” says Elena. “But we should think about generations to come and the children of our children who will definitely feel it if we fail to act now.”

UPSHIFT is a UNICEF supported initiative that aims to foster innovative and creative thinking among young people to understand the challenges they face and help them design innovative solutions in the form of a product or service. It builds on “human-centred design” methodology which is transferable and helps both teachers and students develop entrepreneurial skills, such as: project management, critical thinking, teamwork and successful communication. 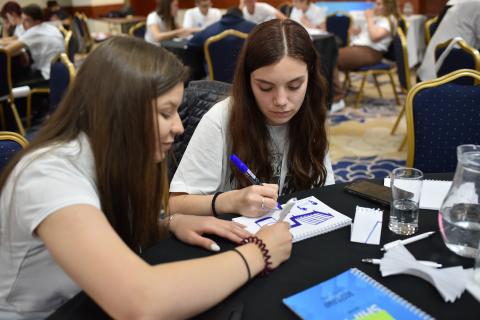 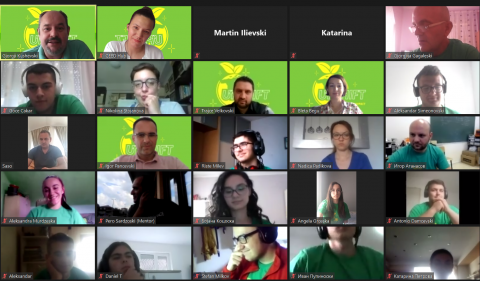 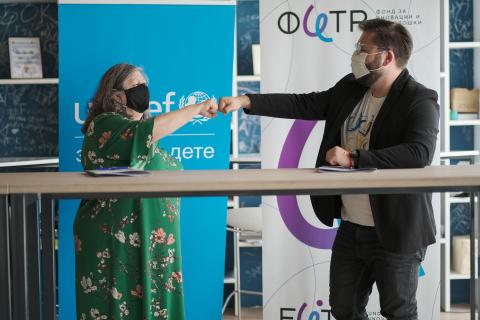 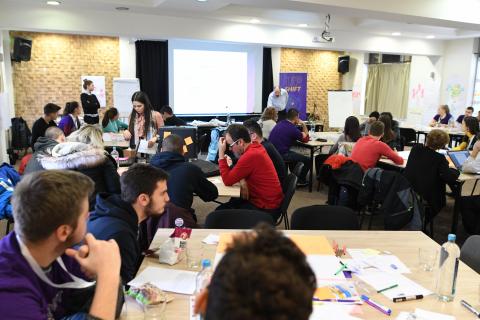