The power of live theatre to stimulate engagement and debate was evident as eight 10-to-16-year-old children from the Al-Masaken neighbourhood in El-Mina, Tripoli, took to the stage. Their play – created to promote positive change, community awareness, and behaviour that protect children’s rights – wrapped up a UNICEF Lebanon-supported and Government of the United States-funded community development project, facilitating dialogue between the local population and municipality of El-Mina, and which was implemented by International Orthodox Christian Charities (IOCC).

Scenes relatable to the lives of those in the audience - the Al-Masaken community - were brought to the stage, depicting the role parents, teachers, and peers can play in addressing domestic violence, school drop-out and drug addiction among children.

"The essential messages that we are trying to deliver are related to parents’ attitudes that would eventually prevent children from resorting to drug abuse, by taking good care of their children and never letting them drop out of school under any circumstances.”

Sally, IOCC’s Field Coordinator, says, “The interactive theatre tool uses role-play to encourage children to voice their opinions and make the audience join in to make changes in the scenario to reach a happy ending. This tool teaches us how to adapt our life stories by changing behaviour and attitude. The essential messages that we are trying to deliver are related to parents’ attitudes that would eventually prevent children from resorting to drug abuse, which is widespread in the neighbourhood, by taking good care of their children and never letting them drop out of school under any circumstances.”

380 of the neighborhood’s parents and children sat and absorbed scenes, each inspired by experiences of young people from within their community, that depicted violence, unfair treatment, and neglect.

Adding a unique level of engagement, the audience had the opportunity to intervene throughout the evening, and to change the scenarios to highlight alternative and more positive behaviour from parents, teachers, and friends. The interactive nature of the play kept the audience engaged and captured everyone’s full attention.

Moemen, the drama teacher, spent eight days preparing the children to perform the play. He notes that the original script portrays the negative version of a story, provoking the audience to become involved and change the actors’ behaviour to avoid negative consequences for the children—including drug addiction or dropping out of school due to their family’s financial hardships. “We want to deliver the important messages, which are the reasons behind drug dealing and drug abuse, and [communicate] that people can seek aid from social centres to prevent those negative consequences before reaching the problem.”

The stories enacted in the play reflect and describe the current situation in Al-Masaken. During the performance, the children and the audience learned that they can improve their lives by making wiser decisions and changing their attitudes and behaviours.

Abir, Program Specialist at UNICEF comments that the range of ebehaviours showed a sad reality that requires our collective efforts. Many of the scenes emphasized the role, beliefs, and perceptions of parents and teachers. Promoting positive behaviour at a child’s level is effective but requires great awareness for the community to acknowledge negative behaviours and adopt new pathways to protect their children and support them thriving.

Ten-year-old Rimas performed in the play. She says that her character as a teacher in the play taught her that carelessness on the part of school and teachers towards children who have family problems is pushing them toward the streets. Another actor, Omar, age 14, who took the role of a well-mannered boy who is negatively influenced by a friend, hopes that his role can influence others to end drug abuse in the streets around his home. His friend, also Omar and aged 14, played the part of the friend who changed him and says that, through his role, he tried to encourage children to be strong enough to push back and to avoid negative influence from their peers.

"I advise my friends to always listen carefully to their parents’ advice." Nour El Dine, 16.

Nour el Dine, 16, who played the part of an aggressive father in the play, began to understand the meaning of fatherhood through his role. He says, “a father should be patient with his children. He should always take them under his wings, and be aware that his anger might lead to negative consequences among children. I know a lot of children who have had problems with their parents which often leads them to them living on the streets. I advise my friends to always listen carefully to their parents’ advice.”

The interactive theatre performance was produced by the Al-Masaken junior committee with the support of UNICEF Lebanon, and was funded by the Government of the United States. The committee consists of 15 children who represent the neighbourhood’s children and who advocate for their rights. During preparing for the play, the members attended a series of workshops on children’s rights, and awareness sessions on positive, interpersonal interaction and communications skills. 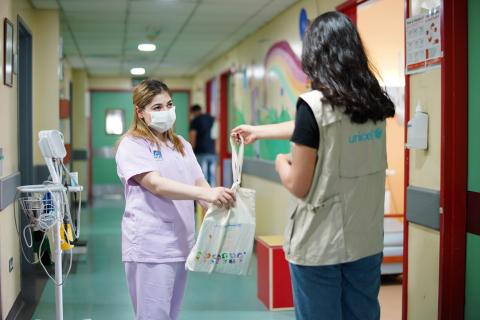 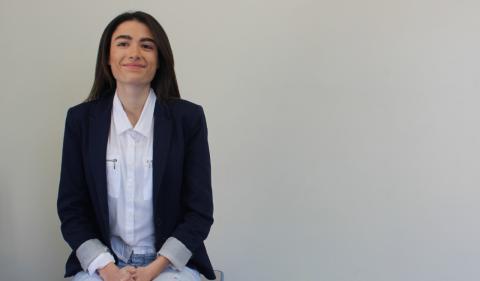 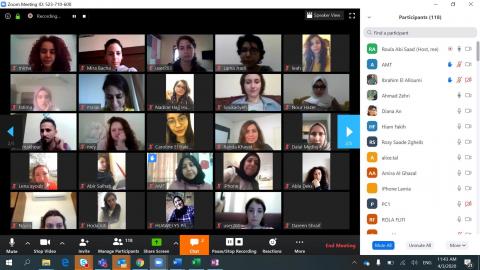 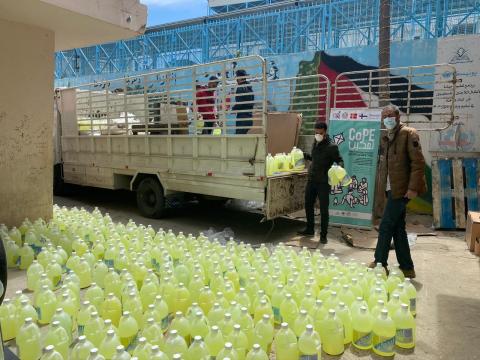 UNICEF supports the fight against #COVIDー19 in #Lebanon.
UNICEF to meet growing needs of families impacted by COVID-19 pandemic in AlJalil camp.
Read the story