UNICEF’s 70th anniversary is an opportunity 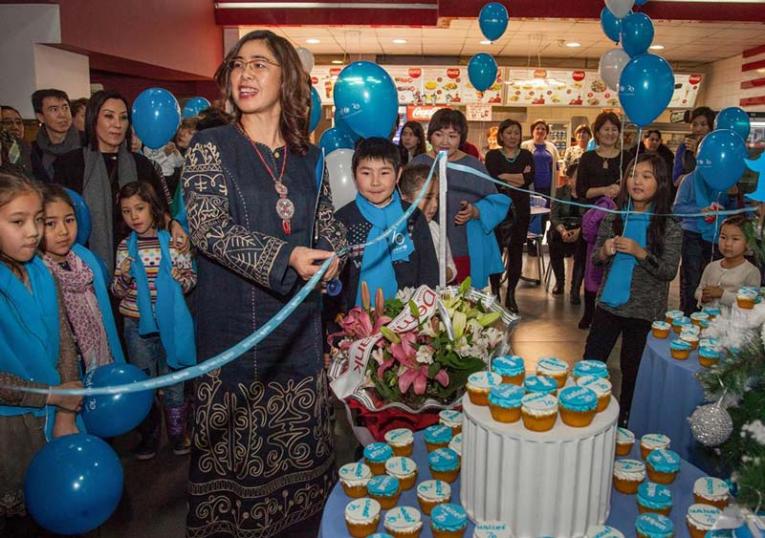 BISHKEK, 15 December 2016 – On 20 November, Universal Children’s Day, 20 prominent Kyrgyz writers read their “tiny stories” dedicated to children, in broadcasts on two the national radio stations, Obondoru (in Kyrgyz) and Retro FM (in Russian) reaching a potential audience of over 1.4 million people in this country of 6 million.

On 6 December, UNICEF held a breakfast reception “For Every Child, Hope” for ambassadors, heads of international organizations, and representatives of the donor community. The well-attended event centreed on the situation of children in Kyrgyzstan, outlined by UNICEF Representative Yukie Mokuo. Ms. Roza Otunbaeva, the former President of Kyrgyzstan, was an honored guest speaker.

Youth were at the centre of the next UNICEF@70 event: some 100 millennials filled the meeting hall at UN House in Bishkek to discuss with Representative Yukie Mokuo the situation of children globally and in the country as well as the opportunities for young people to support UNICEF’s mission.  The initiative was so popular that a repeat event had to be scheduled for all those who could not attend the first one.

The main anniversary event took place on 9 December, when nearly 250 people, including a wide range of UNICEF partners, and their children gathered at Rossiya, one of Bishkek’s cinemas. It was a real birthday celebration – with cakes, balloons, music and mimes.

Kyrgyzstan’s First Lady, Ms. Raisa Atambaeva, addressed the audience saying "Our country’s development depends on the development of every member of society. And a person’s development, the formation of a personality, happens from the moment of birth. Efforts to support girls and boys in their development may sometimes go unnoticed, but it is work of extraordinary importance and magnitude. Today’s celebration is an occasion to remind ourselves of all UNICEF has achieved as the champion of Kyrgyzstan’s children."

Vice Prime Minister, Ms. Cholpon Sultanbekova, then presented a letter of recognition from the Prime Minister, Mr. Sooronbay Jeenbekov, thanking UNICEF for its tireless work for children: “Five implemented Country Programs of Cooperation between the Kyrgyz Government and UNICEF show our close cooperation for over 20 years,” the Prime Minister said in his letter, proceeding to highlight some of the major joint achievements: “Adopted over the years Code of the Kyrgyz Republic "On children," the laws on state benefits, breastfeeding and flour fortification, pre-school education have improved the lives and development of children, reducing child mortality and extreme child poverty. An increasing number of rural children is covered by preschool education."

After addressing the audience, Ms. Atambaeva and Ms. Sultanbekova along with UNICEF partners watched The Beginning of Life, a feature documentary on advances in neuroscience to show how crucial the early years are in children’s lives.

On 11 December, UNICEF marked the end of the 70th anniversary celebration by screening The Beginning of Life once again, this time as a free-of-charge event open to the public. Later in December, a national TV station and three regional TV stations in the southern Batken and Osh provinces plan to broadcast this film. A public screening has also been held in Osh city together with a series of events for parents, children and youth.

“On the occasion of UNICEF’s 70th anniversary, we organized the screening of The Beginning of Life to emphasize the importance of the first three years development in children’s lives. In Kyrgyzstan, a significant progress has been made to improve access to early learning. Still, only one in five children have access to preschool education. UNICEF is committed to work with all partners to expand our work on early childhood development in Kyrgyzstan to reach even more boys and girls with learning opportunities,” said Yukie Mokuo, UNICEF Representative in Kyrgyzstan.

UNICEF Kyrgyzstan chose to focus the anniversary events on early childhood development, and the documentary underpinned UNICEF’s messages in the most captivating way.