After years of destruction, vaccines bring hope to Mosul

Mosul, 26 October 2021. - After the escalation of violence in Mosul, Iraq in 2014, over 60 health facilities came repeatedly under attack, severely disrupting access to basic health services for children and families. In 2018, as many as 750,000 children in Mosul and surrounding areas were struggling to access basic health services, even after the violence had subsided. Less than 10 per cent of health facilities in Ninewa Governorate were functioning at full capacity.

Saad and his family stayed in Mosul during the ISIS occupation of the area. “After ISIS left, the situation in Mosul returned to normal, but then COVID-19 hit. It made a lot of people lose their jobs and many closed their shops and markets, so all of this affected the economy in Mosul,” says Saad. It also made it difficult to access health services. But slowly, the health facilities are reopening and restoring hope among the people.

Among many families waiting in the overcrowded corridor at Al-Mithaq Health Center in Mosul, Saad and his wife Noor are in the hospital for the fifth routine vaccination of their baby, Sedra.

“We advise all the parents to stick to the vaccination schedule without any delay, because it is better to boost the immunity of the child. It also prevents diseases,” says Saad.

To support the Government of Iraq’s efforts to restore health services in the areas retaken from ISIS, UNICEF and its partners have been supporting primary health care facilities to provide important health services, so that children and families can remain healthy and rebuild their lives. This includes providing equipment for and supporting training on good quality antenatal and postnatal care, growth monitoring and nutrition counselling, promotion of breastfeeding practices, and funding the provision of routine immunization for displaced persons and refugees. UNICEF also supports the roll-out of COVID-19 vaccines in Iraq, through training of vaccinators, risk communication and community engagement, supplies procurement and improving access to the vaccine for remote families.

In order to ensure routine vaccination for children like Sedra and support COVID-19 vaccination, with funding from the Japanese Government, UNICEF and its partner Peace Winds Japan have built temperature-controlled warehouses to store vaccines, including COVID-19 vaccines, in Mosul and in nearby Dohuk. The health center which Saad is attending stands next to the newly built vaccine warehouse in Mosul.

The warehouse will contribute to strengthen the effective management of Iraq’s vaccine supply chain. Families like Saad’s will be able to benefit from the warehouse soon. This should reflect positively on vaccine availability and effectiveness for both routine vaccination and COVID-19 vaccines.

“Noor and I have also registered our names and we are waiting to be informed when to take the COVID-19 vaccine”, says Saad. 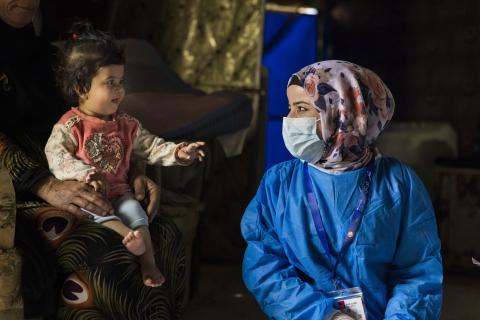 UNICEF and Germany delivered 653 refrigerators to support vaccination in Iraq

UNICEF, in partnership with the Ministry of Health, launched a campaign to support the delivery of COVID-19 vaccines and routine immunization services in all districts of Iraq