The cost and benefit of education in Iraq

The cost of Education

There has been remarkable progress in education in Iraq. Enrolment in primary education grew tremendously over the past decade, increasing at about 4.1% per year. As of 2015-2016, 9.2 million students are enrolled across all education levels in Iraq. The total enrolment in primary education almost doubled to six million children in 2012 from 3.6 million in 2000. Girls’ enrolment grew at all levels and at faster rates than boys’ enrolment, although they are still enrolled in lower numbers than boys and tend to drop out at a higher rate. The rising number of students and recent financial crisis in Iraq pose new challenges in terms of providing sufficient education resources for the growing number of students. Unless Iraq increases its public education resources, its expanding enrolment will continue to strain existing education resources.

In fact, as of 2013, 13.5% of school-aged Iraqi children (1.2 million children) did not have access to basic education.1 For those who are in school, there are large drop out and repetition rates. The quality of education and learning outcomes is decreasing, due in part to multiple shifting of schools and dropping teacher retention rates. Government spending on education infrastructure also remains low, although there is a marked increase in private schools yielding higher achievement rates.

Iraq launches, with the support of UNICEF, the National Strategy on Early Childhood Development. 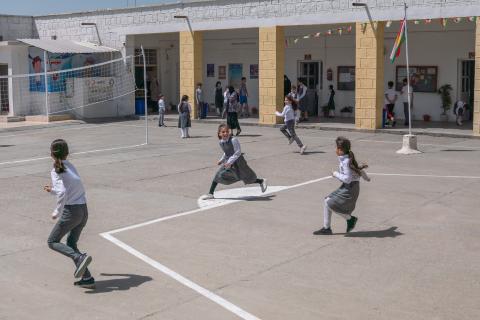 UNICEF receives USD $1,4 million from the Government of Canada to support young people’s transition to entrepreneurship and employment in Iraq