A Second Chance for Gabonese Children In Need of Birth Certificates

Launched in Libreville in Mid-November, the campaign to register children who don't have birth certificates is part of the joint 'Citizenship and Social Protection' programme

They've waited a long time for this moment. Amina Izzedine and Mohammed Shawwal came to try their luck during the campaign in Big Libreville to register children who do not have birth certificates. Running from 13 to 26 January 2022, this was the second campaign since 2014 that has been organized by the Ministry for Social Affairs, with support from UNICEF.

Fourteen-year-old Mohammed Shawwal has never had a birth certificate. Since 2016, his mother has tried hard to make up for lost time and register her son's birth.

She was only 17 when he was born. "I remember running back and forth to the court to try to fix it. It wasn't easy getting either the witnesses or the money required, I wasn't prepared," recalls Amina who has now collected all the necessary documents, including the 'age certificate' required because she didn't give birth in hospital and the witnesses' ID cards.

This time, she's confident her son will finally get his birth certificate. "They took good care of us when we arrived here at the District 3 municipal library, where they're running the campaign. It was free and they were fast. I can't wait to hear the outcome," she says enthusiastically as she makes her way home.

This piece of paper will also make life a lot easier for Mohammed. The Year 10 student will be taking his BEPC official exam this year, but he'd also like to travel in the future and simply do well in life. "It's embarrassing to have to tell my friends that I don't have any official documents confirming my existence," he explains.

And he's not the only child facing the same problem. There are a lot of others in the same situation, also without papers. They're hoping that this procedure will give them a second chance too. At the District 4 town hall, we met a group of four people sitting impatiently in the waiting room.

They came to register Divine, a young girl whose father disappeared not long after she was born. "When Divine was born, her father went to the town hall to get her birth certificate. He never came back and hasn't been in touch with his family since. That's how my niece ended up without a birth certificate," explains Divine's uncle, Benoît Biague, who has come along to support his sister. With all her documents, he hopes that Divine, now in Year 8, will finally be officially recognized. He saw the advert on social media and immediately urged his sister to come to the local town hall to find out more.

This 'catch-up' campaign is exactly what thousands of 'unofficial' children in Libreville have been waiting for. Since it started, the staff at the Ministry of Social Affairs have received lots of requests for more information. 46 officials have been tasked with ensuring that the two-week ID campaign runs smoothly in Libreville, Akanda, Ntoum, Kango and Cocobeach. They completed two days of training before they started, and the aim is to make sure that no one is missed. The entire campaign is covered by UNICEF.

Poaty Blanche Edith is a supervisor in District 3. She hasn't taken a lunch break because a lot of people have come in to either request more information or submit applications. "There has been a lot of interest. I've seen several parents submit applications for birth certificates for children whose births hadn't been declared for various reasons: lack of resources, fathers who left, or fathers who didn't recognize the child," she explains.

The authorities are also supporting the campaign. "I'm personally very pleased to see this commendable initiative—it will save many families. The main aim is to ensure access to social protection and, above all, to give every child the chance to be officially recognized as a citizen," adds Emane Jean Baptiste, Mayor of Libreville District 1. That day, his town hall had seen 150 people who had come to ask for information.

This campaign to register children who don't have birth certificates is part of the joint 'Citizenship and Social Protection' programme. Launched in mid-November 2021 in greater Libreville by the Ministry for Social Affairs and Women's Rights, with support from UNICEF, the programme will reach an additional 30,000 children who do not currently have any official paperwork. The first phase of the project provided birth certificates and health insurance cards to 11,780 vulnerable children in several municipalities across the Estuary Province. 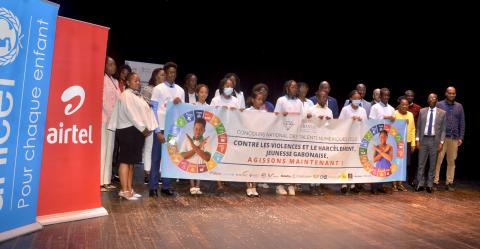 On the Day of African child, children present digital solutions to tackle violence in schools 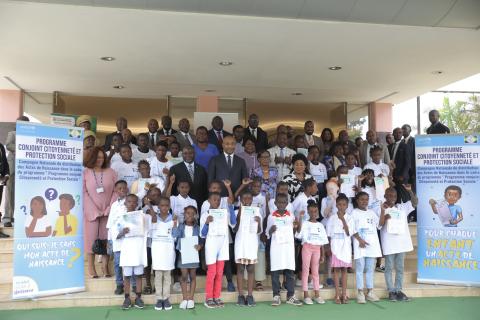 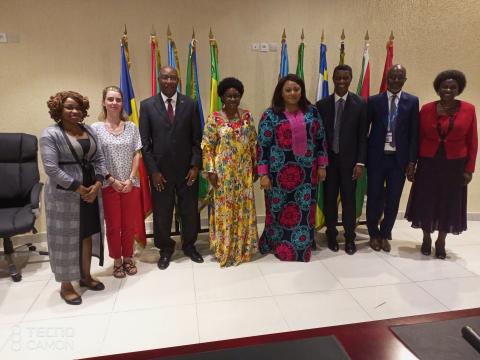 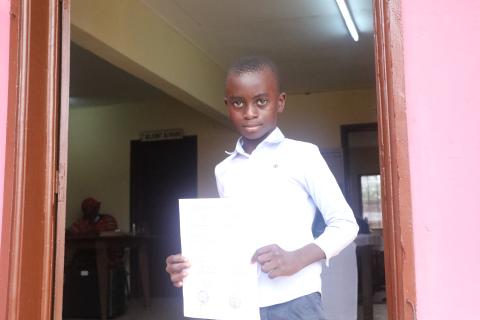 Birth certificate is a door opening