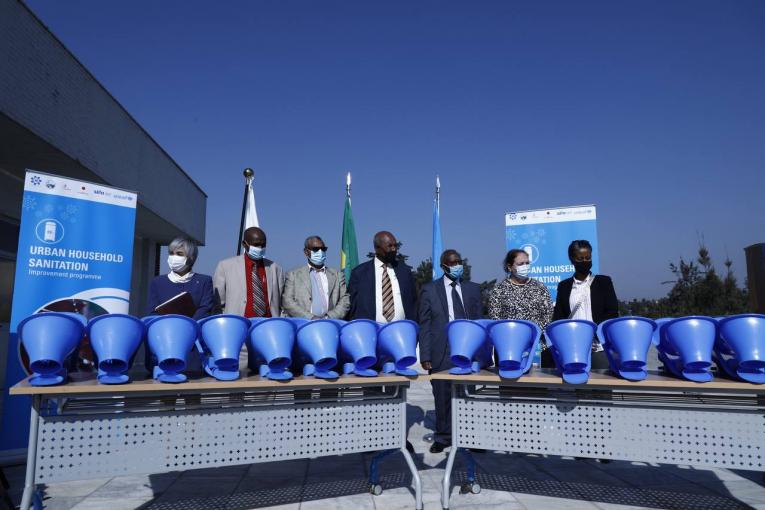 Today, the Japanese Government has handed over to the Government of Ethiopia 165,000 SATO pans worth nearly US$1 million donated by LIXIL Corporation, a Japanese company.

The SATO pans were handed over by Ms. Eyerusalem Taye,  Leader SATO Africa a part of LIXIL in Ethiopia to Getachew Bedane, Acting State Minister in the Ministry of Labour (MoLSA) who manage the Urban Productive Safely Net Programme (UPSNP) together with the Urban Job Creation and Food Security Agency (JOBFSA), for low-income or disadvantaged urban productive safety net recipients in Ethiopia. Present were Her Excellency Ito Takako, Ambassador of Japan to Ethiopia, and Adele Khodr, UNICEF Ethiopia Representative.

A SATO pan is a toilet pan which uses a mechanical water seal to close off pit latrines from the open air. It reduces odours and disease transmission from insects that come into contact with human waste. A safe toilet, alongside good hand hygiene, are critical in times of the COVID- 19 pandemic and these SATO pan toilets will enhance sanitation services to stressed communities, thereby reducing their vulnerability to disease outbreaks.

Ambassador Ito explained that the 165,000 sets of SATO Pans donated by the LIXIL Corporation will be distributed to the most vulnerable beneficiaries of UPSNP as part of the Japanese Government’s grant aid of over US$ 4 million given to Ethiopia through UNICEF to reduce human-to-human transmission of the coronavirus and mitigate its impact.

“The COVID-19 pandemic can truly be described as a “Human Security Crisis.” We need to focus on the protection and empowerment of each individual so that no one, including these who are most vulnerable, will be left behind.”

UNICEF considers the contribution not only as an urgent requirement during the pandemic, but also as a strong support to the sanitation or Open Defecation Free ‘Tsedu’ Campaign which was launched in Ethiopia in November 2019 by the government.

“Although Ethiopia has made progress in improving sanitation, it is crucial that we reinforce our efforts in addressing sanitation in urban areas if Ethiopia is to meet the sustainable development goals by ensuring that basic toilets are built for every household,” said Adele Khodr, UNICEF Representative in Ethiopia. “This ambitious goal also requires empowering all kebeles in every part of the country to end open defecation, a practice that contributes to a high incidence of diarrhea in children.”

As part of UNICEF’s support to the Government of Ethiopia in the COVID-19 response, hygiene and sanitation support is being provided to beneficiaries of the Urban Productive Safety Net Programme (UPSNP). Earlier in the pandemic, soap was distributed to all UPSNP participants and this support has now been scaled up to include sanitation.

Due to the increased risk of disease transmission in densely populated areas, and the highly vulnerable nature of many UPSNP recipients, this response is seen as a front-line prevention intervention.

Following a rapid Sanitation Survey of 165,000 UPSNP recipients conducted between October and November 2020 in 10 Ethiopian cities, 78,000 households were initially identified as requiring immediate toilet upgrading using the SATO pan, 68 per cent of which are in Addis Ababa.

Currently, training of masons is being conducted by the NGO PSI with support from TVET centres and installation of latrines is ongoing and planned to be finalized by end of March 2021 with the support of the Government of Japan. The total number of beneficiaries of the SATO pans is expected to be 750,000. 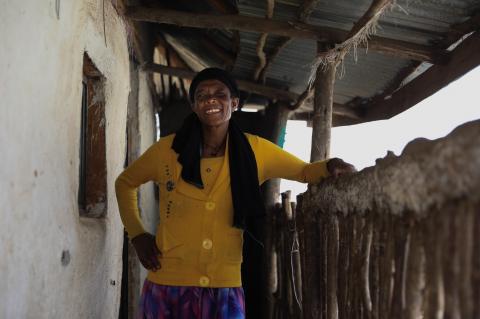 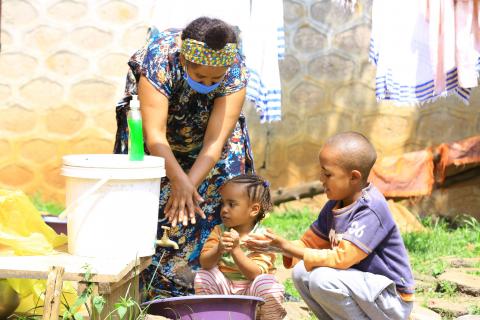