Appropriate nutrition is crucial for optimal growth and development of children

With two thirds of child mortality attributable to malnutrition, Egypt stands as one of the 36 countries, where 90 percent of the global burden of malnutrition falls.[1] Despite the notable decline in child mortality in Egypt, achieving the Millennium Development Goal 4 of reducing by two-thirds the under-five mortality rate before 2015 remains challenging. Malnutrition rates remain high particularly among children under-five; stunting among under-five children stood at 21 percent in 2014, while child wasting and underweight stood at 8 and 6 percent respectively.

In addition to the double burden of malnutrition, anemia that is a condition in which there is a deficiency of red cells or haemoglobin in the blood, resulting in paleness and fatigue; is also a major challenge in Egypt affecting 27.2 percent of children under-5 and 25 % of women within reproductive age (15-49 years). Anemia during pregnancy is one of the leading causes of anemia in infants and children. A series of cost-effective nutrition interventions during the first 1,000 days from a woman’s pregnancy to the child’s second birthday can increase the child’s ability to grow.

The concern about malnutrition that it has a long series of devastating effects on early childhood growth and development contributing to not only to infant and child mortality but also, to physical, and cognitive developmental impairments among children if children survive. It further presents considerable risks for future mothers and women where child malnutrition, leads to an infinite cycle of malnutrition throughout the life cycle later on. This is especially true looking at stunting, wasting, and micronutrient deficiencies –mainly iron deficiency anemia affecting large numbers of children, adolescent girls, and women within reproductive age.  Overweight leads to increased risks of obesity, and consequently to what otherwise preventable non- communicable diseases including heart conditions, and diabetes, The 2015 Egypt Health Issues Survey (EHIS) confirms that non-communicable diseases (NCDs) are on the rise and remain among the leading causes of death in Egypt.[2] 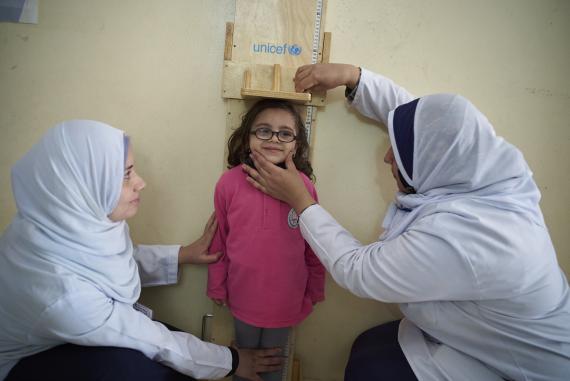 Causes of malnutrition in Egypt,

Direct causes of child malnutrition due to inadequate dietary intake are evidenced in poor Infant and Young Child Feeding practices (IYCF), among which the most concerning, is the decline of exclusive breastfeeding rates at 4-5 months of age from 34% to 29% down to 13 % according to the respective DHS surveys of 2005, 2008, and 2014. Early initiation of BF, one of the indicators of adequacy of care, stands at 27% (EDHS 2014). Of the underlying causes of malnutrition also is food insecurity, which in Egypt, is associated with poor access to a balanced diet among the poorest sections of society, as well as poor dietary habits, lifestyle and lack of nutritional awareness across the population, as opposed to issues of food availability”.  Furthermore, only 36% of households have appropriate child stool disposal practices, which is an indication of poor environmental conditions, reflecting underlying causes of child undernutrition.