UNICEF's response to the refugee crisis is part of the Regional Refugee and Resilience Plan and focuses on education, health and child protection.

The Syria situation is the biggest humanitarian and development crisis in recent history, with implications for global peace and security. As of 31 March 2018, an overall number of 225,728 asylum-seekers and refugees were registered with United Nations High Commissioner for Refugees (UNHCR)[1]. There are currently more than 127,414 Syrian refugees living in urban neighborhoods and shared accommodations, including 16,000 under five-years old children. Furthermore, as of December 2017, there are 4,309 unaccompanied and separated refugee children under the protection of UNHCR in Egypt.
Due to the protracted nature of the refugee crisis in Egypt and the ebbing level of sympathy towards the refugee and migrant populations, humanitarian actors are faced with challenges in reaching all vulnerable families and sustaining the level of assistance.

Due to the economic situation of the country, many vulnerable families are struggling to cope, with many slipping into poverty. According to the last UNHCR’s Socio-Economic Assessment, about 60 percent of the refugees who have been assessed were considered under the poverty line, while 25 percent were identified as close to the poverty line. Regarding child protection, in addition to the enormous physical and psychological traumas that refugee and migrant children have undergone, the most alarming child protection concerns are related to child labor, child dropout of school, violence and sexual harassment.

In the health sector, the Ministry of Health and Population has allowed Syrians to use public healthcare services. With the increased demand for healthcare services, a strategic shift was made to reduce parallel health systems in favor of the integration of refugees in public health services to further increase access to quality and equitable healthcare in an efficient and sustainable manner. Unfortunately, health services are already significantly overstretched in Egypt.

In the education sector, even though the Government of Egypt has granted full access to public education for Syrians, significant barriers remain related to both access and quality of education in a safe environment. Syrian refugee children and their parents report that over-crowded classrooms, bullying and transportation problems are some of their biggest concerns. The additional pressure on the education system, the capacity to absorb Syrian students has been a continuing challenge. Moreover, due to language barriers, refugee children of other nationalities, including Somalis, Ethiopians and Eritreans are unable to access public schools and must either learn outside the formal education system such as refugee community schools or enroll in private schools, which many cannot afford.

UNICEF’s response to the refugee crisis is part of the Regional Refugee and Resilience Plan, which represents a global first for the UN. It aims to strengthen protection and support for Syrian refugees and host communities. UNICEF’s response focuses on education, health and child protection and aims at: ensuring that children have access to education and other learning opportunities, creating a protective environment for children and promoting psychosocial health and development, raising awareness on parenting, broadening opportunities for children and adolescents to build skills, improving  access to quality primary healthcare services, ensuring  lifesaving assistance through secondary and tertiary care, enhancing the capacity of the healthcare information system and strengthening community-based health response.

UNICEF, in close collaboration with UNHCR, has planned for a winterization cash grant in the 2017-2018 winter to provide an estimated 118,000 people, including 47,200 children, with cash disbursements to purchase winter clothes between November 2017 and February 2018 with over the 80% of the cash being disbursed in December. This is a complementary top-up to the existing UNHCR grants, to ensure that 47,200 migrant and refugee children are better able to meet their needs during the winter season 2017-18. The total contribution provides up to EGP 600 meet the Minimum Expenditure Basket (MEB) for needy families. 7,959 extremely vulnerable households with children were directly reached with cash assistance in 2017.

In 2017, UNICEF interventions have benefitted 56,471 children through community-based child protection interventions which include programmes and recreational activities for younger children, life skills for older children, and programmes on positive parenting delivered to 15,678 parents and caregivers. In 2017, UNICEF provided legal and humanitarian assistance to 287 children detained in connection with irregular migration, of which 131 were UASC. UNICEF also provided multi-sector case management and specialized services to 10,611 children, including supporting children in detention and cash assistance. 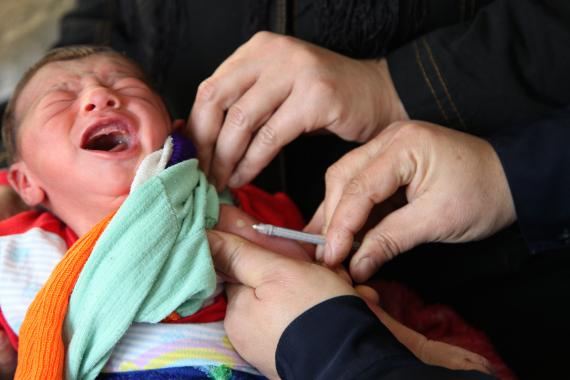 In the health sector, together with the Ministry of Health and Population, UNICEF has provided integrated support for the Mother and Child Health model and strengthened the Ministry’s capacity to provide quality services for Syrian mothers, girls and boys. Equipment and capacity building activities were provided to meet the increased demand and to ensure access to a comprehensive and quality package of maternal, neonatal and child health. Among the key achievements, 102 Family Health Care units benefited from these interventions, in 2017 19,701 under five Syrian children received primary healthcare consultations, immunization and growth monitoring services, 1,045 women in the childbearing age received antenatal care services in 12 Governorates and 525 medical team members including 180 Syrian community health workers were trained to mobilize target communities on access to quality healthcare services. There was also a sub national campaign in 2017, by which 6,031,161 children under 5 were immunized 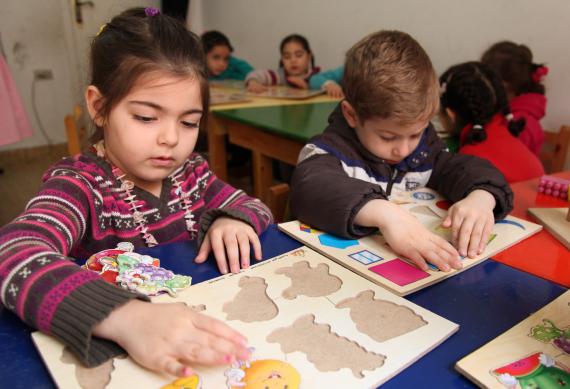 Egyptian and Refugee kids playing together in Cairo.