Education Under Threat in West and Central Africa

The number of schools forced to close due to rising insecurity in conflict-affected areas of West and Central Africa tripled between the end of 2017 and June 2019.

The increasing number of children forced out of school due to violence in West and Central Africa contributes to a total of 40.6 million primary and lower secondary school-aged children who are out of school in the region. About one in four children globally who need humanitarian support – including education and other services critical to learning – live in just 10 countries in West and Central Africa.

Nearly half of the schools closed across the region due to attacks, threats of attack and increasing violence are located in northwest and southwest Cameroon; 4,437 schools there closed as of June 2019, pushing more than 609,000 children out of school.

More than 2,000 schools are closed in Burkina Faso, along with more than 900 in Mali, due to growing violence across both countries.

The number of schools closed due to violence in the four countries affected by crisis in the Lake Chad Basin – Cameroon, Chad, Niger and Nigeria – stayed at roughly the same high level, varying only from 981 to 1,054, between the end of 2017 and June 2019.

Between April 2017 and June 2019, the countries of the central Sahel – Burkina Faso, Mali and Niger – witnessed a six-fold increase in school closures due to violence, from 512 to 3,005. 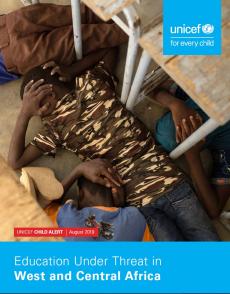